The Suit of Wands Tarot Cards 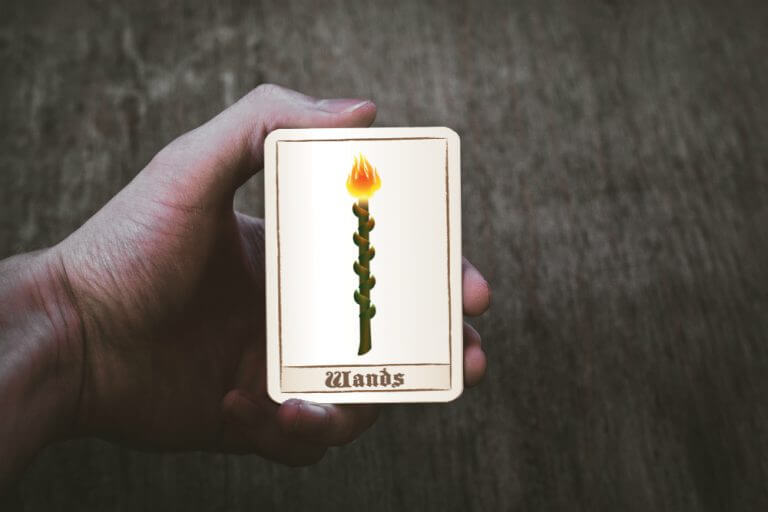 The Suit of Wands represents human inspiration, creativity, competition, and spirituality. The Fool’s journey through this suit begins with the “discovery of inspiration” in the Ace of Wands and concludes with the confidence and individuality of the Queen and King of Wands.

The Wands Cards in a Reading

When a card from the suit of Wands appears in a reading, it commands the querent and reader to act or react to their question or concern. Like all human experience, there are positive and negative moments. These cards address the positive and negative action archetypes we all pass through at some time or another in our life journey.

The court cards in each suit represent the element and three of the signs. The Page of Wands represents the element of fire and the unfocused, but powerful energy of human creativity. The figure in the card is often depicted as an adolescent, and rightly so, since adolescence is filled with a strong energy that is “all over the place”.

The Knight of Wands represents Sagittarius, which is the mutable fire sign of the Zodiac. Expansive Adaptable Fire energy fuels their Primary Drive. Their Life Path energy operates best by exploring openly and trying new experiences; they must learn to map and record their knowledge to manifest their best results.

The Queen of Wands represents Leo, which is the fixed fire sign of the Zodiac. Strong-burning Stable Fire energy fuels their Primary Drive. Their Life Path energy operates best when they are creative; they must learn structure to manifest their best results.

The King of Wands represents Aries, which is the cardinal fire sign of the Zodiac. Maverick Active Fire energy fuels their Primary Drive. Their Life Path energy operates best independently; they must learn self-discipline to manifest their best results.

The Ace of Wands represents inspiration and the spark of creativity that ignites the flame of passion. When this card appears in a reading, it is time to act! Seize the moment and throw yourself into life.

The Two of Wands represents an important decision, once made, that will set your life on a particular course. You must commit to your choice and see where it takes you.

The keyword for the Three of Wands is adventure. With this card in your reading, you are encouraged to open yourself up to travel and exploration. It is time to leave behind what is familiar and venture into the wide world.

The Four of Wands represents celebration around a significant event, like a holiday, or for an achievement that benefits the community. This card encourages us to value our community and our role in society, which we should celebrate publicly from time to time.

The keywords for the Five of Wands are conflict and competition. We do not know what we are capable of unless we prove ourselves in competition with others or by overcoming conflicts in life. No pain, no gain.

The Six of Wands represents success and victory. When this card appears in a reading, we should “ride proudly” regarding our accomplishments or look for leaders who show themselves to be noble and successful.

The keyword for the Seven of Wands is valor. When you draw this card, you need to stand your ground regarding something you believe in and know to be true. You will face challengers, but you can overcome them with the conviction of your beliefs and the superiority of your integrity.

The Eight of Wands represents focus and the willpower to act without being distracted. All eight wands fly in unison, demonstrating a clarity of thought and creativity that will result in tremendous and welcome outcomes.

The keywords for the Nine of Wands are duty and fortitude. The figure in the card is loyal and willing to struggle on for what he believes in and who leads him. Others will look to him as a role model. When you encounter this card, ask yourself, “what do others see in me that they value?”

The Ten of Wands represents oppression. This card appears to warn you that you are trying to do too much and you need to say “no”. If you keep saying yes, you will become overburdened and unable to enjoy life.

The Page of Wands, is the raw energy of fire, needing a container and steady “fuel” to find creative direction and to produce useful outcomes without wasting energy.

The Knight of Wands is an explorer. When this card appears in a reading, you need to engage in a creative quest. You need to focus on your creative passion and deliver on your spiritual purpose.

The keyword for the Queen of Wands is confidence. She represents self-confidence and steady leadership. This card appears in a reading when you need a message encouraging you to believe in yourself so others, who need guidance, can trust you will lead them wisely.

The King of Wands represents the maverick individualist. This card appears when you need a message to act and not worry about what others think. The King of Wands leads by example; he does … and he does not look back.