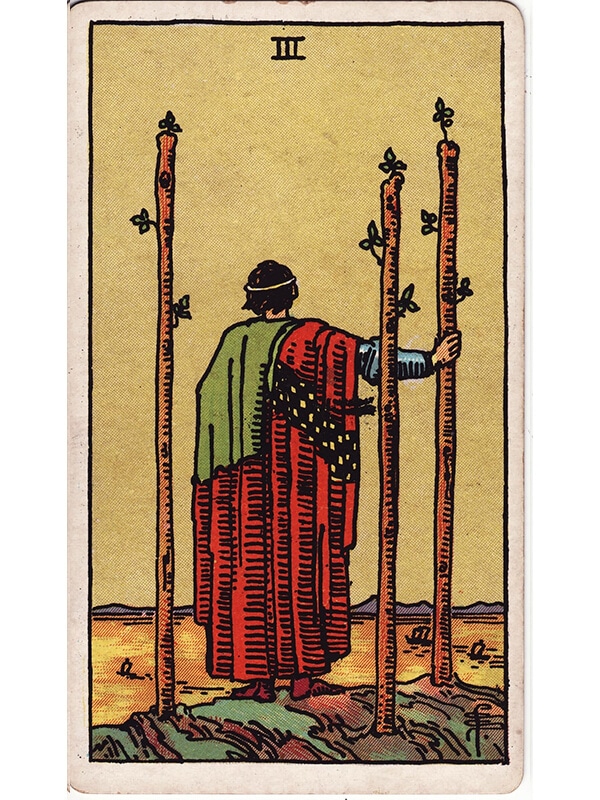 Reversed: delays, discouragement, lack of satisfaction, and fear of commitment

Just like the merchant on the illustration from the Rider-Waite-Smith tarot deck, a new project has recently been launched in the Querent’s life. This is the next step, where the merchant looks at his ships sailing away with a combination of pride and passion.

The Three of Wands represents that initial drive of passion for new projects and new beginnings and is a rather positive card that usually comforts the Querent that a positive outcome is to be expected.

On a more esoteric reading, the Three of Wands could also be seen as the incarnation of the Law of Attraction, as the initial surge of passion and enthusiasm will be create a kind of virtuous cycle that will keep going and growing with each iteration.

In decks derived from the Rider-Waite-Smith tarot, most specifically the suit of Wands, the scene displayed on the Three of Wands tarot card features a single character in an almost empty environment: the character, usually a male, is standing on top of a cliff, his back turned to the reader, looking ahead at the almost empty horizon, were it not for a few ships sailing on the water.

The protagonist is using his right hand to lean on one of the three large staves planted into the ground. From his clothes and the scene, the character is often described as a merchant, gazing ahead at his own fleet of ships.

This is the next step in the process of creation after the initial spark was lit in the Two of Wands. Passion is now driving the decision-making process, fueling imagination, and making sure the Querent is taking the initiative and holding the reins of their own destiny tightly.

The combination of optimism and spontaneous good decisions will usually combine into a very positive outcome for the project at hand. If this is drawn in a business context, it might hint at a positive return on investment. The project is picking up speed and driving fast on the path of success.

After the initial spark, and barring any sort of unrequited love, the Three of Wands usually deals with the early days in a relationship, where both involved still see the other through rose-tinted glasses, where everything is perfect, and where the mind subconsciously turns a blind eye to any flaw or negative element that might arise later on in the relationship.

Career encompasses school and education if that is your current stage; work that is necessary, but not what you would consider a career path; and your actual career path. Regardless of your current stage of development, the Three of Wands is about choosing a path and taking the first step on the journey.

If you are a student, then drawing this card indicates that you have chosen to attend a specific school and study a specific subject. Now that you are on the journey, you need to follow your adventure until you get to your goal … graduation!

If you are doing work that is necessary, but not a career, then you want to appreciate that you have a job. So long as you are working and producing, you can survive and thrive in the world. Even if the job is temporary, be grateful, and learn as much as you can on this part of your life adventure.

If you are in your career, and the Three of Wands appears in a reading, then you need to think about where your job takes you and who it brings into your life. Do not take for granted all the ways “traveling” your career path helps you feel alive and connected to the world.

The Three of Wands reversed meaning turns all that optimism and positivity upside down. It means that the passion driving the matter at hand is taking over some crucial part of the decision-making process, and will lead you to make rash and harmful decisions.

On a more psychological level, it might highlight some sort of fear of professional commitment leading to delays and poorly thought plans moving forward. If the matter being discussed in the reading involves more than one person, the Three of Wands reversed could also represent a rift growing between various collaborators who each want to lead the project in vastly different directions.

Reversed, this card indicates that your relationship has taken a wrong turn or is going in the wrong direction. In fact, you may realize that one of you wants to get off the current path and go in a new direction or down a different path. You either need to get back on the same page or “put down the book” and find a new one to read.

When this card appears reversed in a question about school, work, or career, then you realize you are not going in the direction you want. Perhaps something external has happened, say the professor you want to study with retires, or your company just got sold to a competitor and they are letting go staff from your company. Perhaps the realization is internal; you have shifted and now know your path needs to go in another direction.