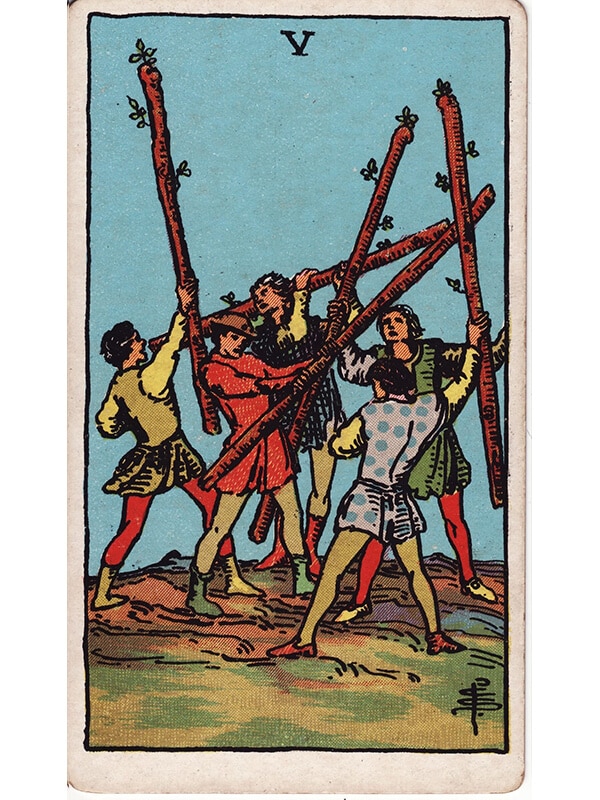 The Five of Wands is a negative card among the minor arcana. Representing a violent altercation between several people (not necessarily physically), it can be seen as a subconscious agent of change, or a way to destroy what has come before and build something better and new.

Surrounded with positive cards it might simply refer to a friendly competition in a card game or any kind of sporting event.

In the Rider Waite Smith deck, there are five men fighting on the image of the Five of Wands. These men each hold a wand-like a staff or bludgeoning weapon as they try to strike one another. Some recent decks have somehow twisted that imagery into a work of collaboration between these men, but such an interpretation would contradict the traditional meaning of the Five of Wands.

It should be noted, however, that the men are fighting with what amounts to wooden sticks instead of swords or more serious weapons, which tends to imply that this is either some sort of deliberate training (like martial artists or some kind of sports exercise).

To be honest, there are not many positive elements to be found in the Five of Wands. This is a negative and violent card, a sign of struggle, and conflict between several people. Usually, this conflict was caused by opposing tempers or reactions, each side made bolder by the energy of the element of fire.

What is positive though, when the card appears on the right side in a spread, is that it usually means that the conflict should have no lasting effects on the relationship of the people involved. This struggle could also represent a friendly competition between friends or colleagues.

This is one of the cards you might prefer never to see brought up or drawn during a love tarot reading. Indeed, in that context, it heralds a serious, upcoming argument with your significant other (or at the very least someone in your family that you deeply care for).

Some arguments can have a positive outcome, allowing two or more people to set down their arms and redefine the limits of their relationship together, as long as no extreme boundaries or limits are crossed during the argument.

A simple way out of such a conundrum, especially in a long-lasting relationship, is simply to agree to disagree on a certain touchy subject when it becomes obvious that both parties have no intention of losing any ground.

Career encompasses school and education if that is your current stage; work that is necessary, but not what you would consider a career path; and your actual career path. Regardless of your current stage of development, the Five of Wands is about conflict and competition.

If you are a student, then drawing this card indicates that you have to prove yourself against your peers. How do your grades compare to the grades of your fellow students? It is not simply a matter of the grade you have, but how your grade stacks up against the competition.

If you are doing work that is necessary, but not a career, then you may be dealing with a disagreement with a fellow co-worker. Or, you may be in a competition with your co-workers for a reward or recognition. Be sure to put forth your best effort to win.

If you are in your career, and the Five of Wands appears in a reading, then you need to step up your game regarding your competitors. Some aspect of your career needs you to be aggressive and willing to fight your way through to another successful outcome. There is no way to avoid the conflict, you should relish it!

When the Five of Wands is reversed or enhanced by other negative cards in close vicinity, there is no escaping the negative consequences of the argument or struggle. The fire element ensures that tempers and ego will flare, and all sides of the argument are likely to stand their ground and refuse to back down, even if they were to realize that they were wrong halfway through.

The Five of Wands reversed could also suggest the presence of a bully or a “troll”, deliberately stirring trouble for personal reasons (or for no reason at all). This card is deeply connected with anger and resentment, especially when built on empty causes.

Reversed, this card indicates that your relationship is not benefiting from healthy and necessary disagreement. Instead, the fighting has a nasty edge to it that is damaging the relationship. If you are the one being nasty, why? Is it because you do not want to be honest about something? Or, if you are in a disagreement and the other person is fighting dirty (passive-aggressive, lying, and so on), then you probably need to get out of the relationship.

When this card appears reversed in a question about school, work, or career, then you may find yourself in a bitter fight with a dishonest opponent. Be especially careful, since this kind of fighting usually involves baseless lawsuits, defamation, and libel. Have your lawyers at the ready.