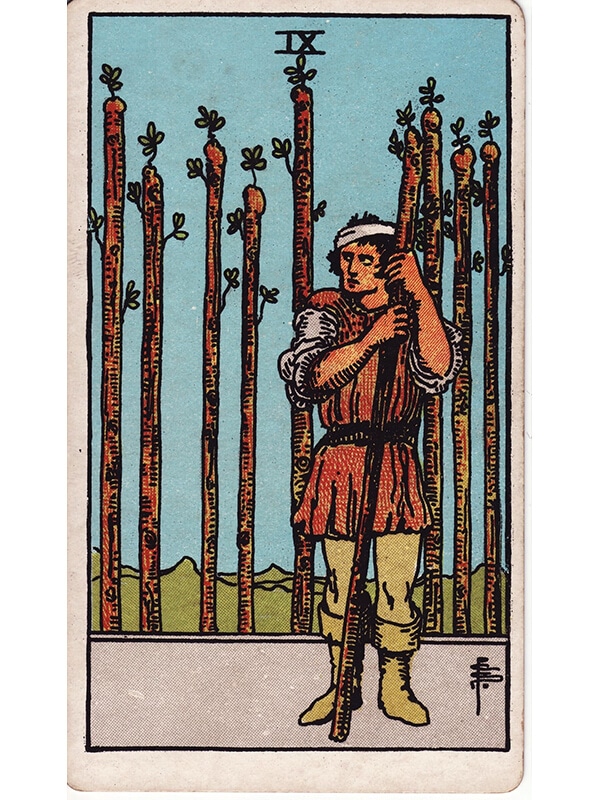 Do not let the apparent loneliness of the man drawn on the Nine of Wands tarot card fool you. This is a strong guardian using patience and discipline to ensure the safety and comfort of people and things they care about. Barring any excess to that regard that might be represented by a reversed Nine of Wands in a reading, this is a source of stability and comfort that others can rely on in time of need, a quiet kind of strength that will rarely throw the first punch but will often throw the last one.

The man leaning on a big staff displayed in the Rider Waite Smith tarot deck version of the Nine of Wands might seem lonely and sad at first sight. The look of determination in his eyes soon dispels that first impression though.

In this card from the minor arcana, we have a man standing guard, ready to defend and protect his ward or stand in the way of an invader. He is waiting expectantly, passive but aware of his surroundings.

The Nine of Wands meaning in a tarot reading represents a more passive kind of strength than the primal expression of that aspect found in the Strength card. In the suit of Wands, this is a display of strength that is not looking for any kind of conflict, but able and willing to stand their ground should it become inevitable.

The obvious concept of protection is further enhanced with stamina and patience, two essential assets in such a situation. In a way, that person is turning into a kind of living fortress, unmoving but strong, dedicated to the protection of others.

Finally, the Nine of Wands card also embodies the concept of discipline and structure, and the importance of a stable set of rules meant to frame and limit excessive behavior. Any social structure where order, discipline, or a clear-cut chain of command is in place can also be reflected in the Nine of Wands meaning, like firefighters or soldiers.

In any tarot spread or tarot reading focusing on love and romantic relationships, the Nine of Wands usually represents the classic “white knight” archetype, someone willing to put their life, energy, and resources down on the line for their significant other in the relationship.

Career encompasses school and education if that is your current stage; work that is necessary, but not what you would consider a career path; and your actual career path. Regardless of your current stage of development, the Nine of Wands is about perseverance and responsibility.

If you are a student, then drawing this card indicates that you need to complete your studies with your best effort, regardless of any difficulties. When you sign up for a course, you make a promise to the instructor and your fellow students, and you need to fulfill that responsibility admirably.

If you are doing work that is necessary, but not a career, then you need to be reliable, show up on time, complete all tasks thoroughly, and set an example to your fellow co-workers. You should strive to be consistent and dependable, which will bring you many rewards.

If you are in your career, and the Nine of Wands appears in a reading, then you need to be sure you are “taking care of business” to make sure your career thrives. You want clients, employees, and co-workers to admire your commitment and sense of duty to your profession.

The archetype of the lone guard putting his life and time on the line is pushed to the extreme when the Nine of Wands is reversed in a tarot reading. He becomes a caricature of himself, going much too far, and as such, the card represents making energy-taxing, time-consuming, and ultimately useless efforts towards a lost cause, often driven by stubbornness or a misplaced sense of martyrdom where a better way out might easily be found.

The reversed Nine of Wands can also alter the point of view of the Querent, and the man standing guard can now represent a formidable obstacle found on the path the Querent is currently taking, a potential source of wasted time at best, and serious danger at worst.

When this card appears reversed in such a reading, it usually embodies the frequent downsides to such behavior, when someone becomes so protective that he or she becomes a source of oppression. This can alter the other person’s point of view, and what used to be a well-guarded castle can soon turn into a gilded cage that will change any former feeling of security into an almost claustrophobic drowning sensation that is particularly unhealthy in a relationship.

When this card appears reversed in a question about school, work, or career, then you need to realize you are worn out and need to take a break, maybe even quit, depending on the obstacles and your lack of enthusiasm. Circumstances could indicate a temporary setback, which could only get worse if you do not take time off. Trying to “push against” this card will only increase your exhaustion.