Learning tarot card meanings is only the first step in turning a deck of illustrated cards into a useful tool for divination, psychological projection, or personal development. The art of tarot reading usually requires learning several tarot spreads, each with their own uses and meanings in context. A tarot spread consists in drawing a fixed number of cards from the deck and arranging them in order onto a fixed pattern.

Usually, when you start learning how to read tarot, you also learn a few spreads that let you put your knowledge into practice. Each tarot “school” or reading philosophy usually comes with a few common spreads that are most often used in tarot readings. For instance, most people learning tarot using the Rider Waite Smith deck with the Major Arcana and Minor Arcana, will probably learn how to perform a Celtic Cross spread, while those practicing tarot reading with the Marseille deck might prefer a tighter 4-card or 5-card spread, especially if they only use the major arcana in their reading.

Most tarot decks you can buy these days usually come with a small booklet providing the meanings and symbolism in that specific deck, along with a couple of spreads that can readily be used with that deck.

Each spread you learn will tell the tarot reader how many cards should be drawn for this pattern, and how the cards should be displayed on the table. While many use a simple shape like a line, cross, or square, several spreads can display cards in a more specific pattern that can either channel some esoteric principles, or simply be arranged into a shape reminding the reader and Querent of the basic theme of the spread (it is common for large spreads focusing on romantic matters and relationships to display the major and minor arcana drawn for the spread in a heart-like shape).

Some tarot readers flip the drawn cards face up one by one and start the reading in sequence, while others prefer to reveal the full spread once every card has been drawn and start their reading with the full contextual information provided by the cards that have been drawn. Both are equally valid and ultimately depend on the tarot reader’s choice and preference.

With the rise in popularity of online tarot readers, many such websites now offer a various number of tarot spreads on demand, detailing each spread and what they cover, and letting the Querent decide which one to use for their particular problem or question.

The use of a spread online can be as visually satisfying as witnessing a tarot spread taking shape in the material world. As an added bonus, you can usually refer to the meaning of the positions in the spread while receiving the reading itself, which can be helpful if the words of the tarot reader do not immediately provide some tangible connection to the matters at hand in your life.

The Celtic Cross spread is usually the first spread learned by tarot readers who start their practice with the Rider Waite Smith deck or one of its numerous derivative decks. First designed and published by A. E. Waite in his Pictorial Key to the Tarot, the Celtic Cross spread (also called “Ancient Celtic Method”) is extremely popular because it can be used in almost any context, from very generic readings to detailed and contextual readings. 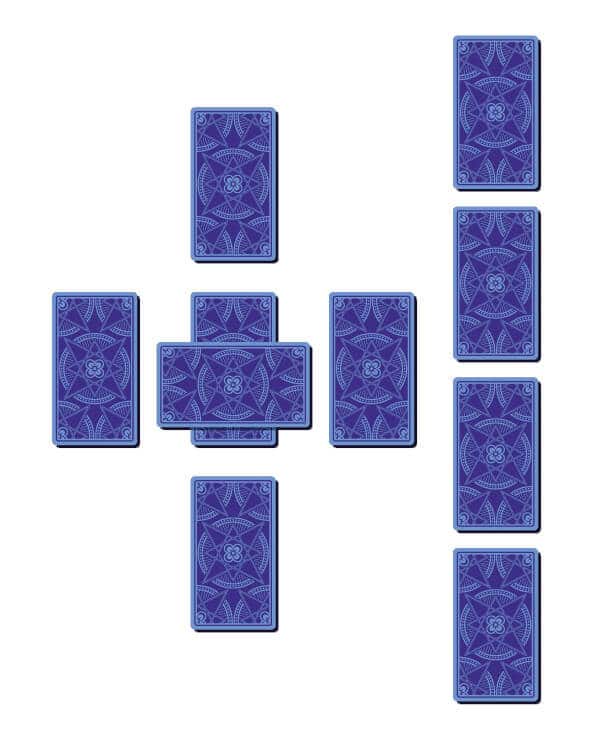 A tarot reading using the Celtic Cross Spread requires 10 cards drawn from the tarot deck. Usually, the tarot reader will remove one card from the deck beforehand to represent the Querent through the reading. This card will often be one of the court cards for ease of use, but some tarot readers pick a card according to what the card means and represents, choosing something suitable for the Querent (if they do not know the person well enough to make that decision themselves, they will usually ask them to define themselves using one or two keywords and make their decision from their answer).

The first two cards are stacked on one another, shaping a cross. This cross overlays the Querent card if one is used in the reading. Then the shape of the cross is made larger by putting the next 4 cards in every direction surrounding that cross: the third card above the cross, the fourth card below, the fifth card on the left and the sixth on the right (though some readers can reverse these last two depending on the card chosen for the Querent, with the sixth card always in the direction where the main character in the Querent card is looking to).

The final four cards are stacked to form a vertical line on the right side of the cross, rising up (the card on the bottom of the line should be the seventh one, and the one on top should be the tenth).

The first card represents the current situation, the general influence affecting the Querent.

The second card represents the various obstacles the Querent has to face, something that should be overcome.

The third card represents the best possible outcome of the situation, long-term goals, or something that might happen in the distant future.

The fourth card represents something that has already happened but provides meaningful information about the problem at hand. It might be the trigger that set everything in motion.

The fifth and sixth card represent the immediate past and immediate future, something that just happened and something about to happen that are both relevant to the matter brought up in the reading.

The seventh card represents the influence that the Querent is currently extending to the matter at hand. It might unveil hidden feelings about the situation, or put some behavior into perspective.

The ninth card represents a deeper connection between the Querent and the matter at hand, often representing the subconscious mind’s reaction and intentions to that regard. Waite poetically wrote that this card represented “hopes and fears”.

The tenth and final card is meant to embody the reading overall, providing the final outcome that can be drawn from the previous card. This should be seen either as a sign of encouragement or as a warning (if the outcome is negative) that something has to change in the situation and the original plan if that negative outcome is to be avoided.

While this is the most commonly used variation of Waite’s original Celtic Cross spread, this particular spread shape has been used a lot through the years, and some tarot readers and/or tarot decks have come up with their own variation on the Celtic Cross spread, so do not be surprised if you find an interpretation that differs from the one above. All in all, in this spread just like any other spread, what matters is to have a fixed pattern prior to the reading itself, something consistent and usable for the tarot reader, and to derive meaning from that specific pattern using the cards that were selected for the reading.

This is a very basic spread shape that is almost universally used in many different contexts and environments and can work just as well with the traditional RWS deck or with a selection of major arcana only like the Marseille deck. 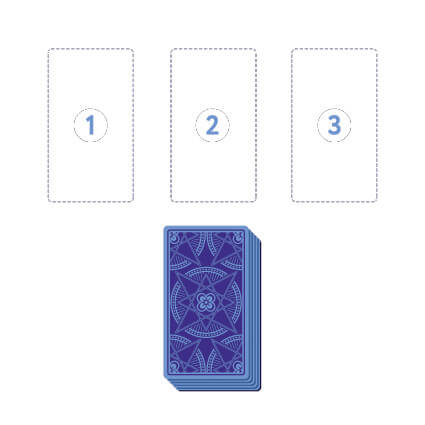 For this spread, three cards are drawn in sequence, and each provides meaning to the reading according to its position. The flexibility provided by this tarot spread usually lets the tarot reader define specific meanings for every card prior to the drawing depending on the question that was asked. Some of the most common uses of the three card spread meanings are:

* Past, Present, and Future

As you can see, there are many different ways to use a three card spread, and most experiences tarot readers usually come up with their own variations, or create some on the spot to find something best suited to the question brought by the Querent for the tarot reading.

Just like the Three Card Spread, the simple cross spread can be adapted to the situation and the actual question submitted by the Querent. One of the most commonly used practices has the first card represent the assets and positive elements affecting the situation, with the second one representing the obstacles and negative elements (like the pros and cons). The third card represents a neutral assessment of the situation, providing some advice on how to deal with it, and the fourth card represents what the situation is currently leading to if left unchecked. When using a fifth card in this variation, it represents the final outcome that can be expected and how it will specifically affect the Querent

There are countless spreads that can be used in a tarot reading. While some of the best-known ones are those who are generic enough to be adapted to a wide range of situations, expert tarot readers will often come up with their own variations or designs for a tarot spread that will resonate with a specific deck they are using, or to provide a better answer to a more specific question or request for advice they have received. You can find many free tarot spreads on the Internet, ranging from tarot spreads for beginners to more complex patterns using major and minor arcana, job-related tarot spreads and love tarot spreads. There is no “right” or “wrong” way to use a tarot spread, each of them should be used in context and work with traditional tarot card meanings to provide a comprehensive and useful tarot reading from the session.

Waxing Gibbous Moon
The moon is currently in Leo
The moon is 11 days old
Back to top button
Close
We use cookies to ensure that we give you the best experience on our website. If you continue to use this site we will assume that you are happy with it.
Accept Read More
Privacy & Cookies Policy
Necessary Always Enabled
Close