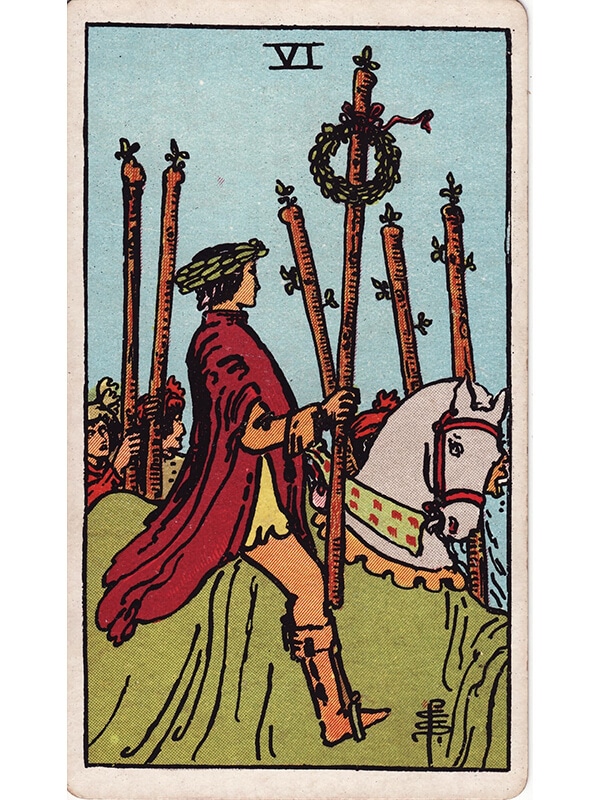 Just like the proud and victorious knight displayed on the Rider Waite Smith tarot deck version of the Six of Wands, this minor arcana conveys a strong and positive message of success, personal achievement, and victory. The meaning implies that success is large enough to captivate an audience, calling for public celebration.

Beware the reversed meaning of the Six of Wands though, where any trace of positivity and optimism vanishes on the spot, replaced with shame, failure, and public humiliation. Context matters and the Six of Wands has a far-reaching influence on the overall reading, which should always be considered.

The man displayed on the Rider-Smith-Waite tarot deck for the suit of wands (and in many other decks since) represents a young man on horseback. He wears a laurel crown on his head, with another one hanging from the staff he holds in his right hand. Footmen and soldiers on his side hold the other five “wands” in the illustration.

This can either represent a knight coming back victorious from battle (or a tournament), or an official messenger bearing news of some sort.

The main meaning of the Six of Wands is victory. This card refers to a positive outcome to a challenge, project, or situation that was the focus of the reading. Just like the knight in the picture with his head held high, this card also represents pride and personal achievements.

The other important element in the suit of Wands, in the meaning of the Six of Wands, is one of movement, of going forward, literally or figuratively. Something is moving or evolving, banishing any kind of stagnation from the current situation, and encouraging progress.

When drawn in a context of a love tarot reading for a romantic relationship, the kind of victory and achievement meaning found in the card might hint at a happy relationship outcome, culminating in a large wedding reception or any other kind of public celebration of love.

If you are a student, then drawing this card indicates that you should appreciate your achievements so far. What have you done academically that puts you above your peers and shows you triumphant in your studies? If you have reached a triumph, then you should turn your energy to achieving the next one – an outstanding grade or recognition as the best student in the class.

If you are doing work that is necessary, but not a career, then you need to perform in such a way that you are seen as the best worker, the number one salesperson, and the person deserving a raise. Perhaps this card reflects this achievement and now you have to decide how to act with your newly won success.

If you are in your career, and the Six of Wands appears in a reading, then you need to land a big contract, outperform your competition, and stand out because of your excellence. Now is the time to “go big or go home”.

There are two main downsides that can be found in the Six of Wands meaning. The first one is an aspect of arrogance coming from excessive pride, which can even turn to pretentiousness if you tend to overestimate your own abilities.

And when the Six of Wands appears reversed in a reading, the initial victory parade is completely reversed too, and the card now refers to public humiliation or disgrace, a source of shame and humiliation for the subject of that particular reading. This is a particularly bad drawing in a tarot reading, especially when it is combined with negative amplifiers like the Tower or reversed Wheel of Fortune card.

Drawn reversed, however, the very negative meaning detailed above can unfortunately also apply to a romantic context. The humiliation and shame could come from a very vocal and public breakup, or be the consequence of past mistakes coming back into the spotlight with disastrous consequences on the relationship. If the card is drawn in a spread dealing with potential future, drastic steps should be taken in order to avoid something that might damage the relationship beyond any repair

When this card appears reversed in a question about school, work, or career, then you may find you shot for the Moon and fell flat on your face. If so, what now? Maybe you talked a big game, only to be beaten by a better competitor. Instead of victory, you become the runner-up.