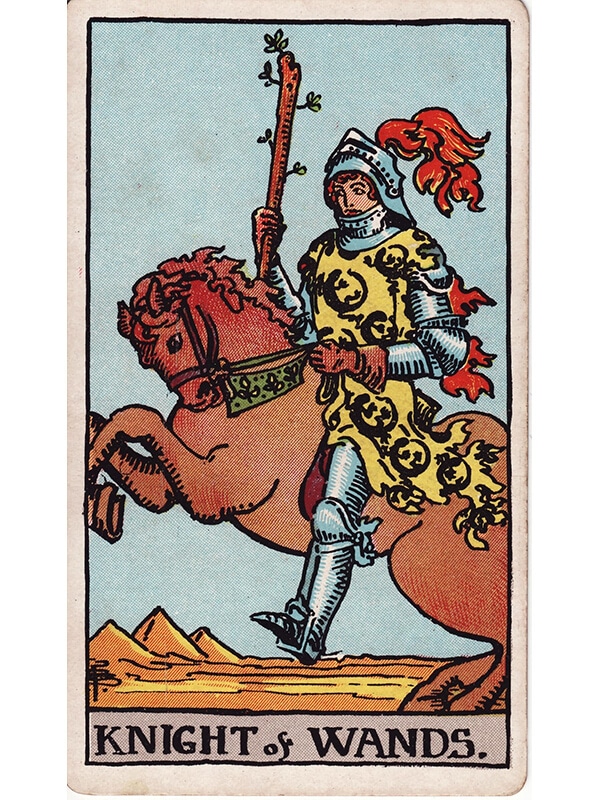 The active element of the four court cards in the suit of wands, the Knight of Wands embodies a person of contradictions, constantly torn between a desire for discipline and willpower, and a deep longing for constant freshness and new adventures inherited from the fiery aspect of the suit of Wands.

Like the Chariot card, the Knight of Wands embodies a person or situation that is constantly in motion, and when reversed the painful contradictions between the opposite side of his personality create a lot of tension and division, both within and without.

The Knight of Wands is an adult man wearing heavy armor on a horse and holding a staff in his right hand. He is riding towards the west; you can see three pyramids in the distance.

The horse he is riding seems to be quite wild and energetic, in stark contrast with the rather relaxed and upright position of its rider. This specific contrast is one of the most important elements of the Knight of Wands and is essential to fully understand what it means in a tarot prediction.

In the suit of Wands, as the Page of Wands ignited the spark of creativity and ideas, the Knight of Wands is the active element that will shape that spark and mold it into something tangible and real. The contrast between the wild behavior of the horse and the cool demeanor of the rider is meant to embody the sharp determination and discipline required to turn imagination and creativity into something usable.

The Knight of Wands understands that some discipline is required in order to shape the wild aspect of fire into something concrete, even if this need for discipline can sometimes conflict with his inner nature.

The horse in the Knight of Wands card channels the energy of the Fire element to “ride swiftly”. The combination of speed with the sharp focus of the Knight mirrors the kind of altered state of consciousness that can be described by race car drivers at the peak of the car’s performance in competition.

The Knight of Wands usually represents a young adult with a very friendly and open character, but often frustrated with the world around him. He represents someone always on the move, who has a hard time standing still. There is always something new to see, something new to do, and while there is an obvious method and preparedness to any adventure, this is someone who cannot really deal with real-world routine.

Career encompasses school and education if that is your current stage; work that is necessary, but not what you would consider a career path; and your actual career path. Regardless of your current stage of development, the Knight of Wands is about adventure and exploration.

If you are a student, then drawing this card indicates that you need to consider travel abroad as an exchange student. Get off campus and get into the world as part of your academic work. Then, bring what you learn back to your classes and share with your instructors and peers.

If you are doing work that is necessary, but not a career, then you need to make sure your job includes travel and adventure as part of its function. You need to look for work that gives you the chance to see the world, making the travel industry an excellent place to fully enjoy this card’s energy.

If you are in your career, and the Knight of Wands appears in a reading, then you need to look for new markets to explore with your product, skills, and expertise. This card can also indicate a need to improve your advertising and marketing budget. You need to “get out there” more with regard to your profession.

When the Knight of Wands appears reversed in a tarot card reading, the obvious lack of synergy between the knight and his mount is enhanced and the meaning of the card embodies the various problems that can likely ensue from such discord.

The contrast between the nervous haste of the horse and the cool discipline of the rider can create a feeling of frustration that can easily spread outward. In a reading, this reversed card could embody the kind of impatience you can get when you feel out of pace with the world around you when things are moving either too fast or too slow for you.

Reversed, this card lets you know that you or your partner are looking for adventure … with someone else. If this happens to be true, then it would best to be honest before getting into a situation that can really break hearts. If you know your quest for excitement is no longer with your partner, or you feel they are not excited to be with you, consider ending things before they get messy (or messier).

When this card appears reversed in a question about school, work, or career, then you may realize you have “gone on the wrong quest” or the price is too high for a current adventure. It is probably too late to go back and recover either money or time, so best to cut your losses and try to find a new adventure that suits you better.