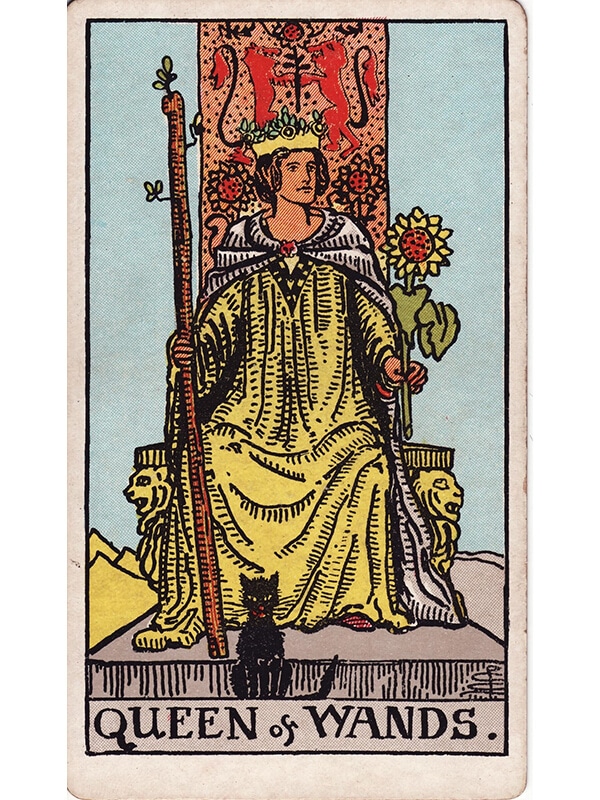 The soul of the four court cards in the suit of wands, the Queen of Wands is a muse that will keep inspiring men and women around her, encouraging and nurturing their creative side while staying away from view. Though she may seem quiet and introverted, the Queen of Wands still has the element of Fire burning bright within her, a blaze that only becomes apparent when she gets angry.

Like a wise, sleeping dragon, it is better to have her as a friend than as an enemy, and those who disregard her or lower their guard due to her friendly demeanor and a good disposition are in for a bad surprise if they take advantage of her kindness.

The Queen of Wands embodies the purest elements of the suit of Wands. In the Rider-Waite-Smith (RWS) tarot, the Queen is sitting on a throne with a staff in her right hand, a sunflower in her left hand, and a black cat at her feet.

It is interesting to note that in Waite’s version, a lot of these elements could be seen as an echo of the Empress card. More recent tarot decks have moved away from this primal nature symbolism and introduced other symbols closer to the element of fire.

As the embodiment of the soul of the suit of Wands, the Queen of Wands card represents the source of inspiration and creativity, the muse whispering in the ears of artists and inventors to trigger the spark of imagination that was encountered in the Page of Wands.

Her role as the original source of new ideas and concepts makes her a kind of mother figure for imagination and creativity. This nurturing, life-giving element is probably what justified the natural elements found in the original Rider Waite Smith depiction of the Queen of Wands.

In order to be the source of all these concepts, the Queen of Wands needs to be as intuitive as the Queen of Cups and as fertile as the Queen of Pentacles, but the element of Fire remains her strongest aspect, allowing her to balance these two elements with burning determination. The Queen of Wands is passionate and more driven than her counterparts in the other suits and loyal to a fault.

In a love-driven reading, The Queen of Wands usually represents a dark-haired woman, friendly and honorable. Her calm demeanor hides a treasure trove of imagination and ideas, but she lacks the extrovert element of the Page of Wands and would rather inspire from the shadows than stand in the spotlight.

Cross her one time too many, however, and the Queen of Wands will abandon all pretense of discretion to turn into a wild fiery tornado willing to smite those who wronged her.

Career encompasses school and education if that is your current stage; work that is necessary, but not what you would consider a career path; and your actual career path. Regardless of your current stage of development, the Queen of Wands is about confidence and trustworthiness.

If you are a student, then drawing this card indicates that you need to present yourself as a confident student and seek out trustworthy instructors. Your instructors have to be both knowledgeable and capable as teachers, but not arrogant. Make an effort to get to know the best instructors so they can get to know you, which will help immensely when you need letters of recommendation.

If you are doing work that is necessary, but not a career, then you need to make sure your employer knows you can do the job well and can be trusted. You want to work with someone who has this kind of energy because they will be sure to take care of their workers and make the job enjoyable.

If you are in your career, and the Queen of Wands appears in a reading, then you need to make sure you are keeping up in your profession so others will hire you and work with you, confident that you can do what you say and perform expertly when the job is underway.

The temperamental aspect that can be found in many cards in the suit of Wands is obviously present in the Queen of Wands too. In a way, she can be seen as a sleeping dragon. Her nature, as a source of ideas and concepts, keeps her focused on her task; but once she has reached her breaking point, her anger is formidable and fiery.

One sure way to trigger her wrath is to repay her loyalty with betrayal and lies. This is a slight that will be hard to forgive, and even harder to forget. In that aspect, the Queen of Wands could be seen as an echo of the Goddess Hera in Ancient Greek myths, burning with the intense fire of jealousy and revenge with each new betrayal by Zeus.

Reversed, this card lets you know that you or your partner is feeling insecure about the relationship. The insecurity may stem from a personal struggle that is now affecting the relationship negatively. This card would suggest you seek outside counsel to help deal with any self-esteem or self-confidence issues. And you can suggest the same solution if you see your partner struggling.

When this card appears reversed in a question about school, work, or career, then you may be losing your confidence in your abilities, area of study, or industry. Also, you may be encountering people in school and at work, that lack integrity, behave narcissistically and pretend to be wise to hide their ignorance and insecurity. Be wary!