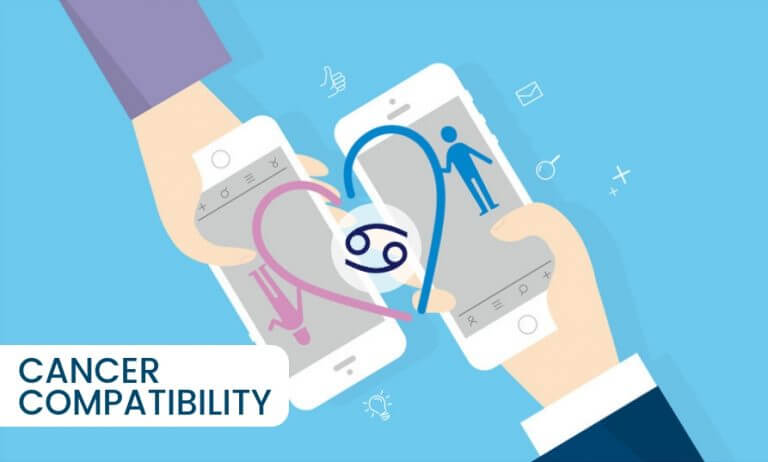 One of the most popular topics that people interested in astrology ask for is that of zodiac compatibility. Based on that notion, Cancer compatibility is no less. A Cancer in love will find peace with people who have clear aims of settling down in life. In this regard, the best match for Cancer is any zodiac sign belonging to the element of water or earth. Cancer love compatibility is thus limited to Taurus, Virgo, Scorpio, and Pisces.

There is another way to determine a Cancer best match, apart from judging by the elements. This concept involves looking at Cancer dates and finding the right person through a Cancer compatibility chart.

Cancer and Aries are two signs that can be called both compatible and not compatible with each other. What is the reason behind this peculiar statement? Let us find out for you as we delve into the details of Cancer compatibility. As a zodiac sign, Cancer tends to work along just fine with Aries. It is that kind of a fine where you could expect a healthy professional relationship, a good friendship, but certainly not long-term dating compatibility.

Cancer and Taurus have a strong partnership because of their mutual need for security and stability first and foremost in their life. They share an inherent need to be emotionally and financially stable as they build their romantic and home life. At times, Cancer with Taurus partner may find the emotional security to be less than the amount they require, which may cause some issues.

Cancer and Gemini have built the archetypes of the Homemaker and the communicator; they have their own quirks and traits that might not work for the zodiac compatibility of the match. Cancer has a notorious personality that is prone to mood swings with emotional extremity; they can change the atmosphere of the conversation in a heartbeat due to this trait. While, Gemini has an aloof character that is emotionally distant, excluding them from the list of Cancer compatible signs.

Cancer has a very powerful connection to their emotions, being a water sign, they can feel despair and joy at one moment and excitement and love the next. Their emotional prowess is due to their planetary ruling planet that is the Moon. One of the reasons that Cancer is deemed as an emotional and moody personality is because the Moon rules them. Read more on these two signs compatibility.

When one tends to discuss Cancer and Leo compatibility, there are no definite answers as to whether it should be a decision taken or not. This is perhaps the case with all of Cancer compatibility combinations, as only a select few tend to be very friendly towards this sign. Cancer and Leo may be called lucky in the sense that there are a few relationship factors where they tend to be better than average.

One of the main reasons that the Cancer and Virgo combination works so well is because they share the same values and principles of life. Both signs seek stable and secure lifestyle, they constantly worry over the state of affairs between their partners and their home. A Cancer with Virgo has a good chance at sensing their partner’s emotions and needs, which is another reason for their zodiac compatibility.

There are some cases in Cancer compatibility that click right out. These do not need much gelling up, or initial talking dates. They just hit it right out and continue to do so throughout the entire period of their relationship. However, in the rare cases like that of Cancer and Libra, it gets a little unfortunate. There are a couple of reasons that lie behind this. We believe it is important to explain these reasons with their context before we move on to explaining a Cancer and Libra relationship in general.

Both being water signs, Cancer and Scorpio have a strong emotional bond of love that is based on their instinctual commonalities. Cancer compatibility can drastically increase for any signs if they have the same yearning for a stable and steady home. Incidentally, Scorpio has the same need for stability in their life and can offer a mutually secure life to their Cancer partner.

How often have you come across two people who seem to get along so great at times, but right there in front of you, they change to a couple so vicious you are forced to think whether them getting together was a good idea after all? The same is the case with Cancer and Sagittarius. In fact, it is a general trend in Cancer compatibility.

When the Earth and Water signs collide, there is a chance of a strong budding compatible relationship. The two cardinal signs have the romantic ability to fall in love with each other as they become closer over time. On the first glance, we see two opposite signs that have very different traits; however, the different traits fall right into place like two pieces of the puzzle. The Cancer and Capricorn partnership is a mutual relationship of qualities, where each partner offers something that their partner lacks.

The people of this zodiac sign tend to be caring, communicative, and thus tend to be compatible in one way or another with any sign that comes their way. This, of course, does not mean that they would be ideal life partners. However, the certain tension and absolute no-friendship policy that some zodiac sign combinations exhibit, Cancer compatibility charts do not show that in any case. Let us explore this sign’s zodiac compatibility with Aquarius as we uncover the reasons behind it as well as how it all looks.

Immediate affection between two people is a rare moment. However, it is not as rare as you would expect it to be, especially when it comes to a Cancer and Pisces couple. Cancer compatibility generally tends to follow the trend of being not too cozy, yet not too distant either. In the case of Pisces, it tends to warm up a lot more than it usually does. There are many reasons behind this according to astrology, but two take precedence in this case. We will be discussing those before we move on to explain what to expect from a relationship that is so smooth and well-built.