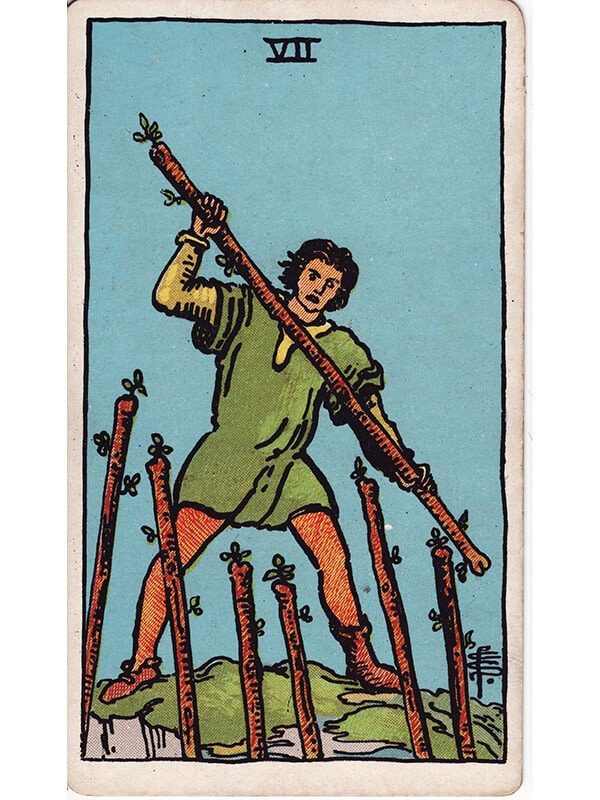 Upright: courage, integrity, standing for your beliefs, and valor

Reversed: defensiveness, lack of critical distance, and being offended

Standing tall like a hero against all odds on the picture in the Rider Waite Smith deck, the Seven of Wands should be seen as a paragon of virtue, sacrifice, selflessness, courage, and valor. Likewise, it echoes the resolve and determination to stand up for what you believe in, against all odds.

Conversely, the reversed meaning of this card usually deals with manipulative people or people who are always on the defensive and never proactively achieve anything. Valor turns into procrastination and apathy, a fertile breeding ground for negative ideas.

Another scene with just a single man in the traditional RWS deck, armed with a single staff and seemingly fighting and fending off assaults coming from the other six wands and staves displayed on the card. The man in the scene seems rather young, but his face is full of determination and he is clearly unafraid, in spite of the obviously unbalanced odds.

In this suit of Wands, as can clearly be inferred from the very evocative illustration found in the Rider Waite Smith deck, this card is mainly a token of courage, bravery, and selflessness.

This card is usually drawn in a reading to highlight someone ready and willing to stand up for their own beliefs, and do their best to make the world a better place in the process.

On a more figurative level, it also represents someone arguing and defending their position against a large majority of dissenting voices. This represents someone willing to defend what they believe in even when surrounded by obvious and numerous detractors.

In the context of a love tarot reading, drawing the Seven of Wands usually hints at some kind of “white knight” syndrome within the relationship, but usually in a good way. Regardless, it means that at least one partner in this relationship basically only lives to make the other one happy.

Career encompasses school and education if that is your current stage; work that is necessary, but not what you would consider a career path; and your actual career path.  Regardless of your current stage of development, the Seven of Wands is about standing your ground and maintaining your integrity.

If you are a student, then drawing this card indicates that you should not compromise regarding your education and your beliefs.  You may find yourself as the odd person out in a class, your field of study, or your school.  If you challenge some aspect of your educational experience and know you are right, then you may have to defend yourself.

If you are doing work that is necessary, but not a career, then you need to do what is right regarding your job, even if it means upsetting co-workers.  Perhaps you have uncovered some form of corruption or abuse of power on the job.  You know what is right and what you must do.

If you are in your career, and the Seven of Wands appears in a reading, then you realize that you are going to “upset the apple” cart in your profession.  When you do, “they” are going to come after you and you will have to hold your ground because it is the higher ground.

The reversed meaning of the Seven of Wands minor arcana twists the normal behavior of the archetypal character on the card and turns him into a caricature of himself. Reversed, the Seven of Wands card meaning deals with a person that is easily offended and prone to anger, someone reacting way out of line and out of proportion to any triggering stimulus.

When it is reversed the Seven of Wands has a much more sinister meaning in a love tarot reading. It might represent someone unwilling to make any kind of serious commitment or effort within the relationship, but is still clinging on to it. This highlights a kind of toxic love and hate relationship that might be the breeding ground for a passive-aggressive personality.

When this card appears reversed in a question about school, work, or career, then you have lost the cause and need to accept that the “mob” is going to rule and your great idea, clear vision, or criticism will be crushed to help the group retain power that you or your ideas would disrupt.  Be careful.

Third Quarter Moon
The moon is currently in Sagittarius