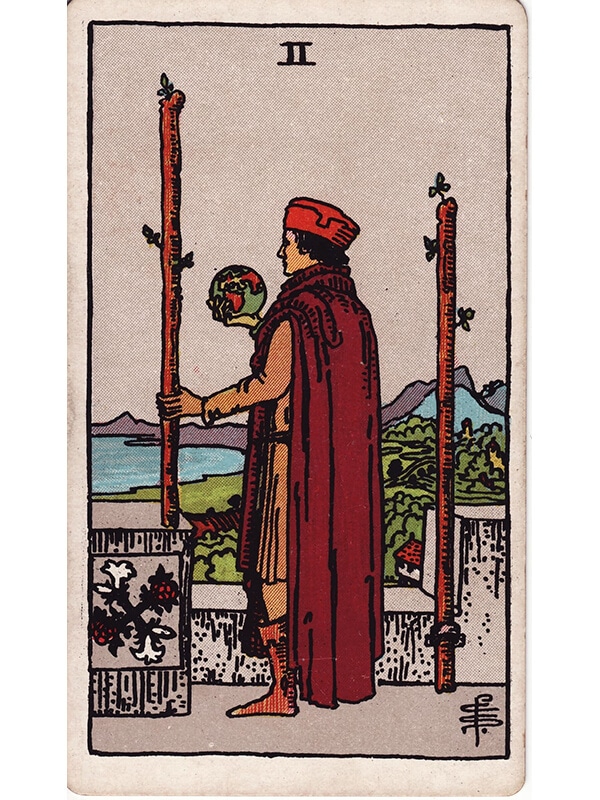 If the Ace of Wands represented the paragon of the values found within the minor suit of wands, the Two of Wands represents the raw element of those. The spontaneous spark that comes early on in any project or relationship to herald the beginning of something new.

Other cards drawn for the reading will usually add some depth to the Two of Wands and offer some insight about that idea and vision’s potential.

In the Rider Waite Smith tarot, the main character displayed on the Two of Wands is usually a man, holding a staff in his left hand (one of the two “wands” that can be seen in the picture) and some other symbolic item in his right hand. In the traditional RWS deck, it is a globe.

In most modern depictions of this minor arcana, the protagonist is almost always male and seems to wear garments suggesting he has enough resources to support himself.

Every journey begins with a single step, and likewise, every project or important decision in life starts with an initial spark, a vision of something bigger and better. Medieval scholars called it a daemon, a source of inspiration whispering into geniuses’ ears, like a muse for the artists. Contrary to what the name might imply when it is read out loud, this has nothing to do with actual demons found in the Bible and other holy books.

This vision is the main message of the Two of Wands in the tarot deck. It is coupled with a sense of determination and confidence, and usually heralds the beginning of a new project or a new direction in life for the Querent. While the topic is often creative or related to a professional career, several cards from the suit of cups combined with the Two of Wands might hint at something of a more romantic nature.

When the Two of Wands comes up in a tarot reading using a love spread, it is usually combined with one or more cards from the suit of Cups. In that case, the reading probably refers to a new (or fairly) recent relationship, the spark of passion or love burning bright and looking ahead.

Combined with cards that bear a more physical or wild meaning, it could also represent the start of an affair outside the range of any potential romantic situation for the Querent, something pleasant and thrilling but without any real emotional commitment.

If you are a student, then drawing this card indicates that you need to think about what you want to become a professional in the world once you have completed your education. Study and mastery are the immediate goals of education, so you can apply what you learn to your working goals.

If you are doing work that is necessary, but not a career, then you want to envision where you want to be three to five years from now. This card wants you to have future goals you can see yourself achieving by following your current path.

If you are in your career, and the Two of Wands appears in a reading, then you need to spend some time reviewing and projecting energy into your long-term goals. Where do you want to be in your career in three to five years? This card encourages you to look to the future and project yourself onto a path of success.

The drive and determination embodied by the Two of Wands find themselves turned upside down when the card is reversed in a spread. Representing a lack of vision and motivation, this card is often a sign of great confusion within the Querent’s mind.

On a more materialistic aspect, a reversed Two of Wands might represent a business deal that falls through, or any other important project losing any traction and being led into a dead-end.

Reversed, this card indicates that your relationship lacks direction. Perhaps you, or the other person, is content to just float along. However, one of you wants to get somewhere in the relationship – moving in together, getting married, starting a family, and so on. And one of you does not.

When this card appears reversed in a question about school, work, or career, then you feel lost regarding your studies and your work. You cannot see a path to expand or grow. If this is the case, then the card is trying to get you to realize you may need to change direction; otherwise, you could wake up one day and realize you have wasted your time.