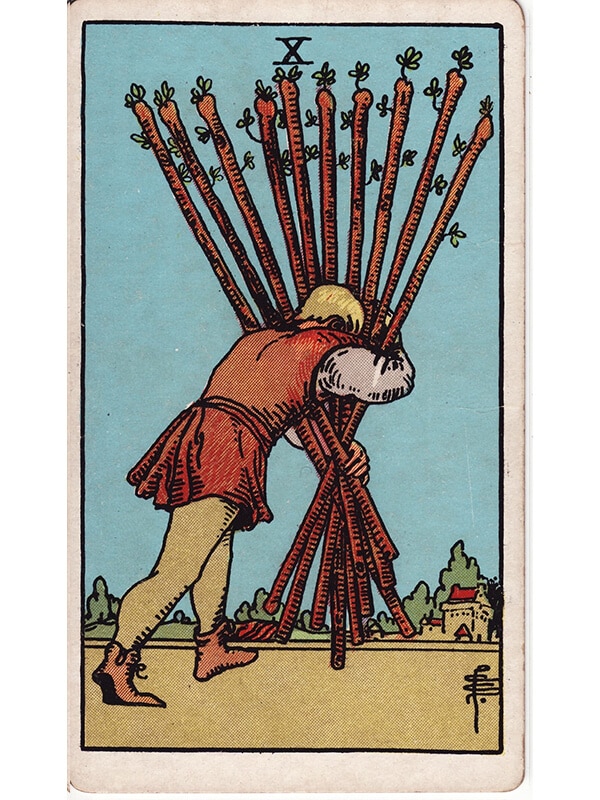 The Ten of Wands is the last numbered card in the suit of wands and closes the series with a bleak image and an even bleaker meaning. Self-inflicted at best, deadlocked, and inescapable at worst, the Ten of Wands is a reminder that life can be tough and difficult sometimes. However, there is a kind of nobility to be found in the willing sacrifice of one’s time, health, or energy for a greater cause as well.

The first impression that usually comes to mind when someone sees the RWS tarot deck illustration for the Ten of Wands is one of oppression and pain. He has his back to the reader so it is impossible to see his face, but his facial expression is easy to imagine from the image.

There are not a lot of positive elements to be found in the Ten of Wands card meaning. The core meaning of this card, when it appears in a reading, is one of burden and oppression. Just like the man depicted in the scene, this card represents the weight of duty and responsibility.

There is a kind of noble honor and devotion that can be found in this card though. The man carrying the staves is not wearing the trappings of a slave, so the burden he bears is a choice that he made deliberately.

The deliberate aspect of this work is commendable, but should not distract the reader from the painful and oppressive aspect of the card’s meaning.

The picture painted by the Ten of Wands is just as bleak when reading in the context of a love tarot spread. When the oppressive and painful element is put in parallel to a romantic relationship, it usually means that this is a toxic relationship for one or both people in the relationship.

Drawing the Ten of Wands in a romantic tarot of love session should always be seen as a warning sign that something is probably wrong in your relationship, and you need to work on specific details together.

The Ten of Wands in a relationship drawing next to Pentacle cards could be a sign of domestic abuse and violence and must be dealt with carefully and as helpfully as possible.

Career encompasses school and education if that is your current stage; work that is necessary, but not what you would consider a career path; and your actual career path. Regardless of your current stage of development, the Ten of Wands is about overdoing and needing to set limits.

If you are a student, then drawing this card indicates that you need to adjust your class schedule down when you sign up for classes; you are taking on too much work and your grades are going to suffer. You may need to stay in school longer to achieve a better outcome than you would get trying to do too much now.

If you are doing work that is necessary, but not a career, then you need to be careful about how your company uses your time and how you allow them to use it. It is good to say yes, but not so good to be a “yes-man” or “yes-woman”; that is a role that leads to burnout.

If you are in your career, and the Ten of Wands appears in a reading, then you need to do a better job managing your time; you have too many responsibilities and your work is suffering as a result. As the saying goes, “if you try to make everyone happy, no one ends up happy” … least of all you!

The situation gets even worse when the reversed Ten of Wands is drawn for a tarot reading. All the noble element of free will that came to soothe the pain of having that burden to bear now disappears. The situation is the same, but the man shouldering that burden did not do it of his own free will.

Indeed, this card is a symbol of coercion, of tyrannical authority, leading to mental oppression and physical exhaustion. This card can represent a situation towards which the Querent feels hopeless, unable to find any way out.

Reversed, this card lets you know that you have arrived at a breaking point. If upright there is still time to change course, but reversed, the break is occurring or imminent, with no chance to avoid it. Now, you are left to go through the break (or break up) until you can start something new (Ace of Wands) from the ashes of the old (Ten of Wands).

When this card appears reversed in a question about school, work, or career, then you have overdone something to the degree that you are burned out, wiped out, and exhausted. All the energy is gone and you are going to have to take a serious break to recharge. And you may not return to what you were doing before, so strong is the reversal for this card.