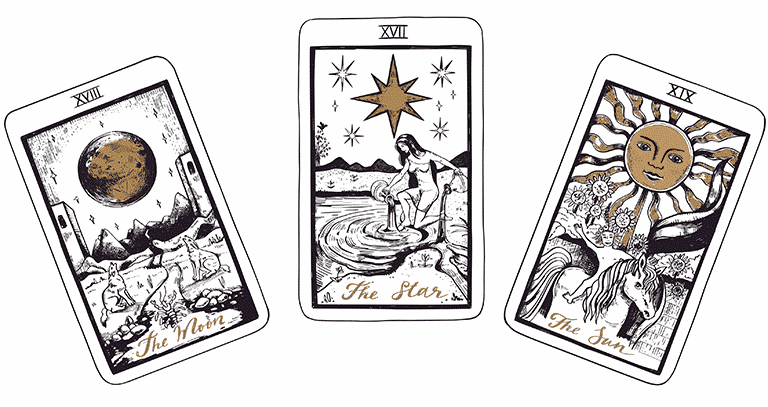 What are Tarot Cards?

The Major Arcana cards represent the major archetypes and experience of our human journey through life. The Minor Arcana consists of four groups defined by the four elements and represented by various symbols. Originally a card game for the noble class, they are now part of psychology, spiritual advising, literature, and media.

The Minor Arcana contains four suits, representing the four elements: air, earth, fire, and water. There are symbols for each suit and the most common ones are: swords for air, pentacle coins for earth, wands for fire, and cups for water. Each suit includes cards numbered from 1 to 10 and four court cards. As it turns out, the actual names of the court cards can change from one deck to the other, but the most common ones are the page, knight, queen, and king, in that order.

Origins and a Brief History of Tarot

Part of the mystery that surrounds the esoteric tarot is echoed in its own history. Most outside scholars trace the invention of tarot back to the 15th century, mainly in Italy, France, and Austria. Initially just designed as playing cards, the powerful imagery worked well in fortune telling once they got out of the noble houses and into the hands of gypsies.

Modern tarot reading began at the end of the nineteenth century, following the work of the Golden Dawn society, and Arthur Edward Waite. They studied tarot intensely, trying to connect the discipline of tarot reading to other occult practices, like astrological horoscopes and numerology, with various degrees of success.

The high society popularity of the Victorian era regarding anything closely related to the occult helped create a boom in interest. The secret societies, especially Masonic ones, sparked enough curiosity and interest in tarot readings to keep it alive through the turbulent early half of the twentieth century. Today, few, if any, of the original secret societies exist, but Tarot reading is stronger than it has ever been.

In the late 1960s and early 1970s Tarot cards started to appear in popular culture through TV shows and movies. By the 1990s, along with the emergence of New Age Bookstores, the spread of large retail books stores, and eventually the rise of Amazon, Tarot decks exploded in number and availability. Thousands upon thousands of decks exist today.

The History of the Tarot: a Highly Debated Matter

There is another prevailing theory promoted some tarot readers and scholars that claim modern incarnations of tarot decks can be traced back to Ancient Egypt. Supposedly, the knowledge traveled in secret from one generation to the next between initiates until the occult revival of the nineteenth century put the knowledge into tarot cards where they made their knowledge public without fear of being caught.

The Art of the Tarot

Besides using cards for readings, the Tarot deck is often a source of inspiration for artists. It is a bold undertaking to do 78 individual pieces of art, even if you are mimicking another deck, like the Rider-Waite Tarot.

Tarot decks have become a fertile ground for new and creative artistic expression and design. Every deck is a collection of 78 renditions of different themes, scenes, themes, and concepts. For the first 500 years (1450 to 1950) decks did not stray too far from similar artistic interpretations.

But with the arrival of and popularity of television and rise of popular culture, Tarot deck artwork began to diversify and expand. Tarot cards appear in movies and television shows, comic books, science fiction, fantasy novels, and traditional fiction. Even high-end art exhibits will display Tarot images or include Tarot themes from time to time. Now more than ever, Tarot cards are part of the cultural and artistic landscape.

Now, new decks arrive each month, either through traditional publication or self-publication. Many still follow the earliest deck concepts while others vary wildly.

How to Choose the Right Tarot Deck?

New tarot decks arrive on the market every month. Not all of them should be considered useful or even usable. Some tarot decks are just merchandise for a movie or a TV series. Or, they are so symbolically confusing, which makes them pretty but unusable. Even so, there is a large and extensive selection of visually accessible and useful tarot decks to choose from.

Read about: Creating a Tarot Deck

Each tarot reader will eventually gravitate toward a specific deck (or more than one) that will be used regularly. Building familiarity with a chosen deck is the best way to become an excellent reader, for yourself or others.

Each Month AskAstrology has a Tarot expert review current and past Tarot decks, as well as Oracle card decks. These reviews look at the quality and size of the cards, visual accessibility of the art, quality of the companion text of the deck, and potential usefulness in professional practice. askAstrology deck reviews began in March of 2019 where you can see the full list of reviews.

How to read tarot cards?

Learning how to read tarot cards means teaching yourself the proper associations between card and meaning. Then, with practice, you make them your own. This last point is quite important. The defined meaning of the cards in any book or booklet that comes with the deck is an anchor point. The understanding of the cards and the reading of the cards takes on the nuances of the personality and wisdom of the reader.

Core meanings for cards are consistent across decks unless the deck creator keeps the structure but reinterprets the imagery and the meanings. If that turns out to be the case, then there can be significant differences in the meanings attributed to similar cards from one deck to the next. With so many decks published, and new ones arriving each year, common meanings become less consistent.

Once you have started to learn the meanings of the cards, you are on your way to becoming a reader, even if only for yourself. You can learn the cards through individual study, online tutorials, or instruction from a professional. Becoming proficient as a reader requires hours and hours of study and practice. Not only do you need to be proficient with the meaning of the cards, but you also must become a master storyteller.

Forming a personal relationship with your chosen deck is the best way to master the cards. Think of each moment in your life that matches with a card in a clear way. You must learn the card meanings so you do not need to reference the book or booklet that comes with the deck. Next you need to practice, first on yourself, and then with friends who can give you useful feedback. No matter who read for, the experience can be profound; so, it is important to treat the practice seriously.

Touch and work with the cards every day. Turning a card over, knowing its meaning, and what you need to say about it needs to become second nature. You do not want to pause or have to look anything up. And when you add one card after another, the narrative should flow as if you knew the story all along.

The Reader and the Querent

There are two roles in a tarot reading experience, even if there is only one person interacting with the cards. If you are doing a reading for yourself, you are both the reader and the querent. The querent is the person asking the question and receiving the reading and the reader is the person interpreting the cards and giving an answer.

The word spread, in a Tarot reading, means “to lay out”. The most common Tarot spread is the Celtic Cross, which is a 10 cards layout following a specific pattern. The pattern puts one card in each direction (above, below, left, and right) around two cards in the center, one for the present moment and one for a challenge. To the right four cards are lined up in a row to indicate the spiritual intention for the reading.

Spreads are constructs for shaping the narrative of the reading. Therefore, a spread can be a single card or a layout for the entire deck. You can do geometric patterns or you can lay them out side-by-side or going up and down. All that matters is the designation you give to each position. A simple side-by-side reading involves drawing the card on the left for the past, the card in the middle for the present, and the card on the right for the future.

Create your own or use ones others have created. Books and online resources will have a very large number of spreads to choose from.

AskAstrology provides a wonderful free service each month. Our professional Tarot expert, Philip Young, PhD selects a Tarot or Oracle deck and draws a card for each sign of the Zodiac. Your Sun sign represents your Primary Drive in life, so the card selected for your Sun sign is a meditation and guide for you each month.

Tarot Card of the Day!

Having a Tarot deck and drawing a card each day is a perfect way to start your day. If you do not have a deck, but want to see a card for today and what card AskAstrology selected. Whatever the drawn card happens to be, it will provide you with a useful message that can help you navigate and understand your day. 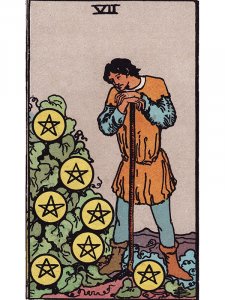 Far and away, the most commonly asked questions have to do with career and romance. And between those two, romance wins hands down. Tarot cards can really help you understand love and romance, especially if you can draw cards with your lover, not just about your lover or love interest. Because asking questions about another person is very tricky, it is important to know the best way to approach a reading about love and romance, so you get a helpful rather than hurtful answer. AskAstrology has some tips and trick for asking and interpreting love questions here.

An Endless Source of Mystery and Wonder

All in all, there are so many things that can be done with tarot cards, and tarot card readings can be so widely different, that you are never truly done learning how to read tarot cards. This is probably why this is a practice that has stood the test of time and has always found people interested in learning about the tarot and keeping the artistic and divination flame alive.

Third Quarter Moon
The moon is currently in Taurus
We use cookies to give you the best experience. Continuing using this site we assume that you are happy with it.Ok