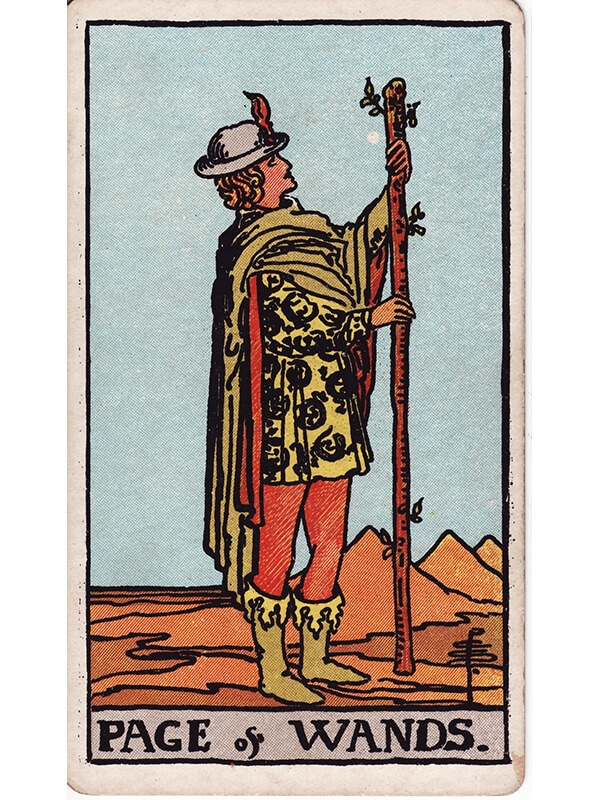 The youngest of the four court cards in the suit of Wands, the Page of Wands represents the fire that has not yet been tamed, the wild and unpredictable spark that adds an element of chaos into any routine pattern. A vector of creativity and change with a wild side and quite a temper, the Page of Wands embodies the wild and crazy aspect of youth, but clearly in need of channeling all that energy towards something creative and productive.

The Page of Wands is a young man wearing elaborate clothes, with a round hat on his head, and carrying a long staff to represent the symbol of his suit. From the way he stands and his body language, he seems to be halfway through some kind of speech or proclamation, like an ancient bard or herald.

In several modern variations of tarot decks loosely based on the Rider-Waite-Smith (RWS) symbolism, the Page of Wands (and all the other pages) are now often obviously female, to restore a kind of balance and parity to the court cards.

In most variations of the Page of Wands, the young man (or woman) is speaking, or doing something formal, and seems to be rather enthusiastic and motivated about it. The Page court cards usually represent the initial spark of the overall symbolic meaning of the suit of Wands.

As such, the Page of Wands can be seen as the initial spark of creativity behind any project, plan, or any other endeavor. This creative drive is channeled with a kind of candid innocence that can echo the free spirit found in the Fool card.

The Page of Wands is extremely charismatic and full of energy and ideas, with a strong desire to let these ideas and concepts roam free, sharing them with the outside world.

The Page of Wands usually represents a young, single person (usually male, but not necessarily). When it is drawn in a love tarot reading it usually refers to someone specific in the Querent’s life, someone with a wild, fiery temper but good and mirthful nature.

The Page of Wands is also a good candidate for the Querent card if he or she embodies that particular character’s traits: joyful, energetic, and passionate.

Career encompasses school and education if that is your current stage; work that is necessary, but not what you would consider a career path; and your actual career path. Regardless of your current stage of development, the Page of Wands is about excitement and activity.

If you are a student, then drawing this card indicates that you need to enjoy the excitement of starting a new class or learning something new. You need to embrace the act of learning and appreciate all the possibilities that exist in studying something to become an expert.

If you are doing work that is necessary, but not a career, then you need to find ways to keep work fun or offset work with fun. Maybe the work provides the excitement or the people you work with are fun. Perhaps the clients are the source of excitement. Seek out enjoyment where you can.

Like the flickering flame of the element of Fire, the Page of Wands also has a darker side when it appears reversed in a reading. On a personal level, the element of the suit of Wands gives the Page a fiery temper. As such, this card can represent someone who has a hard time staying calm when things do not go their way.

The other negative aspect of a reversed Page of Wands echoes the role of herald and messenger inferred from the illustration, as the bearer of bad news. As such, when this minor arcana card is drawn reversed and combined with other negative cards, the reading might be a warning about some impending bad news. The other arcana drawn in the reading would provide more context and details about the nature of such bad news.

Reversed, this card lets you know that the fire is going out of the relationship, but there could still be time to save the relationship. This a Page, after all, so there is a good chance this card is giving you a heads up with enough time to change the negative outcome you are headed towards.

When this card appears reversed in a question about school, work, or career, then you may be losing your passion for your education or work. It could just represent a drop in energy or a dull period that you have to persist through until better energy or opportunity comes along.