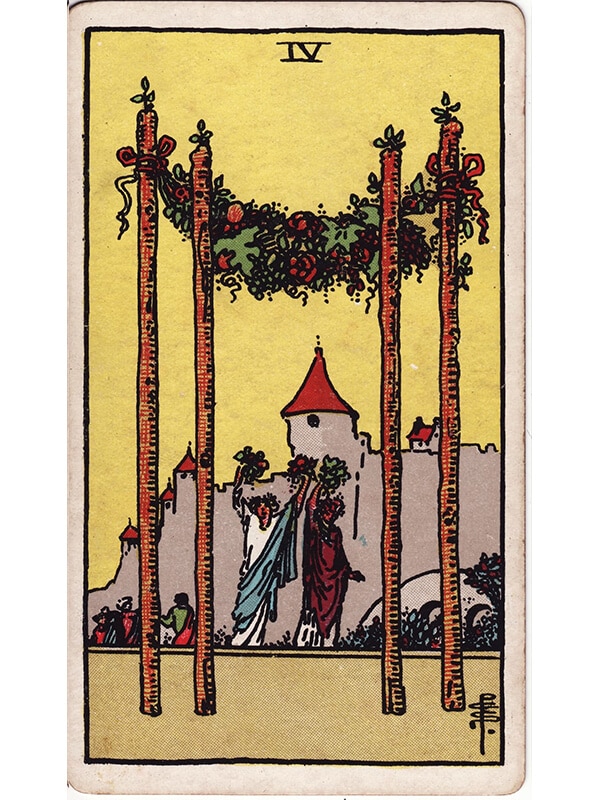 From the four great staves planted in the foreground there is a great garland suspended, two female figures uplift nosegays and at their side is a bridge over a moat, leading to an old manorial house. Divinatory Meanings: They are for once almost on the surface—country life, repose, concord, harmony, prosperity, peace, and the perfected work of these. Reversed: The meaning remains unaltered—increase, felicity, beauty, embellishment (Rider Waite Booklet).

The Four of Wands is an extremely positive card that turns the fire from the suit of wands into a blissful urge to party and celebrate for any possible reason. This is a time to take stock and appreciate past achievements and share laughter and joy with other people.

If reversed, the Four of Wands should be seen as a warning against premature celebration or pointless arguments, the overall message of this minor arcana is to forget all about the stress of everyday life for a little while and just enjoy life for what it is.

With the suit of Wands, the traditional imagery for the Four of Wands has them planted into the ground like great staves, with a garland of flowers tying them together. This is meant to symbolize the kind of village celebrations that were often held in spring or summer. In the background, between the four wands, a couple of women are dancing, visibly happy.

In the distance behind them is a medieval castle. This is meant to clearly indicate that the celebration depicted on the card is held away from any noble court.

Just like the characters that can be seen on the card, the Four of Wands meaning calls for a celebration, a happy and carefree moment. It can either be read literally, in which case it might represent some holiday or celebration of any kind, from a birthday party to Thanksgiving. Or it can be read figuratively, and represent the thrill of achievement felt after a successful project.

Regardless, this is a very positive minor arcana card that calls for a celebration and channels the fire element of the suit of wands into an urge to move, dance, laugh, and be happy.

Additionally, as can be guessed from the two dancers on the card, this is not meant to be a lonely and personal celebration, but something to be shared with others.

The message of joy and celebration conveyed by the Four of Wands tarot card can also be found when the card is drawn in a spread for a love reading. In that case, the minor arcana probably refers to a cause for celebration within the relationship, either a wedding anniversary or any possible trigger for an important event for the couple.

Career encompasses school and education if that is your current stage; work that is necessary, but not what you would consider a career path; and your actual career path. Regardless of your current stage of development, the Four of Wands is about connecting with others and celebrating.

If you are a student, then drawing this card indicates that you should enjoy a study group with your peers who are in the program with you. Or, get together with fellow students for some campus event, like a sporting competition or through a club. Some of these connections may become lifelong friends.

If you are doing work that is necessary, but not a career, then you want to get together with your co-workers and go out and have fun. This card would be well represented by people singing Karaoke at a bar, having a good time, and sharing the fun with each other.

If you are in your career, and the Four of Wands appears in a reading, then consider participating in or leading a team-building exercise. What is something you could do with employees or peers in your career that would allow you to bond and strengthen your connections to one another, that would also be fun!

When the Four of Wands is reversed during a tarot reading, it still refers to some kind of celebration or happy event, but there is likely a problem – the caterer made a mistake, one of the parents gets drunk, or it’s outdoors with no tents and rain pours.

As such, this card also symbolizes arguments and overall discord, once the initial thrill of celebration has worn off and complications arise. On a more figurative level, this could also simply refer to a rather serious argument between people who are usually close, either in a romantic or a professional relationship.

Reversed, this card indicates that your relationship has a problem brewing or already in play because of the friends of your partner or your friends and your partner. There is discord between the two of you because of the actions of someone in your circle of friends or among your family members.

When this card appears reversed in a question about school, work, or career, then you may find yourself cast out of the group dynamic in your college, work, or business. For some reason, you do not fit in and this card lets you know that you may be excluded and have to look for new people to network with and find success.