Since the time astrologers gained a little popularity in the general public with their predictions and accurate analyses of personality, they have been continuously approached by people to know what zodiac signs go well together. In simpler words, this concept is known as zodiac compatibility. It incorporates the simple principles of knowing the dates of birth of two different people to come up with their natal charts. The positions of various planets in these natal charts are then critically analyzed to come up with horoscope compatibility for the couple.

A zodiac compatibility calculator can easily let you see how compatible you are with a person of another zodiac sign. Before we provide critical insight into the world of zodiac compatibility, it is important to grasp just the basics of astrology that lead up to the building of such knowledge and concepts.

Such online compatibility calculators work on only one basic principle. There exists a preset data compiled by astrologers that establishes clear patterns of compatibility within sun signs, such as Aries tends to go well with Libra. However, love compatibility by birth date only is not something that should be taken as the final word.

Astrology is not something that has only one direction with definite answers to everything. While looking up to the zodiac signs of the sun seems like a very effective method of determining love horoscope compatibility, there are a lot of other methods too that come together to form a constructive and complete analysis about zodiac compatibility. This includes comparisons of natal charts, as well as Davison’s method to better see the bigger picture.

Asking the Sun for answers to personality and zodiac love compatibility

While many planets contribute to form a complete outlook of a person involving his inner and outer demeanor, the sun forms a significant part of this. It is also safe to assume that a love compatibility test is primarily based on the personality traits of a person. Zodiac compatibility thus relies a lot on the signs that the sun experiences in order to find a horoscope love match.

Signifying how important the sun is not just in one’s natal chart but the entire solar system, it is important for one to realize that it is the largest entity present in the solar system. In addition to that, everything in the known universe circles around it. This makes it the unchallenged boss of all the stars and planets, making the decisions about personality by it final.

The Depth to Zodiac Relationship Compatibility

One more thing that is necessary to remember when looking for a zodiac love match is to remember that the knowledge astrologers seek through the planets and the stars are never to determine how much a relationship will succeed, how long a marriage will last, or how much of potential there is for sex. Instead, it is only something of an extension of the basic principles of astrology.

Relationship horoscope compatibility works basically by comparing the personalities of two people and how good of a working relationship they would have with each other. Various factors come into this, including the elements of the zodiac signs as well as the planets.

Elements in the mix of a zodiac sex match

This, however, never guarantees a horoscope sex match between these two people, but only banks on the fact that there will be heightened feelings of understanding between the two people at hand, be they in a marriage, in a working relationship, or just two friends. To further add to this, even an unsuccessful relationship can come out of such a match given that the two people understand each other so well they begin to despise each other. However, this concept tends to incline more towards philosophy rather than astrology.

Zodiac compatibility at the individual level

Let us now move on to find out in a brief how each zodiac sign tends to find compatibility with other signs and the science involved behind it. 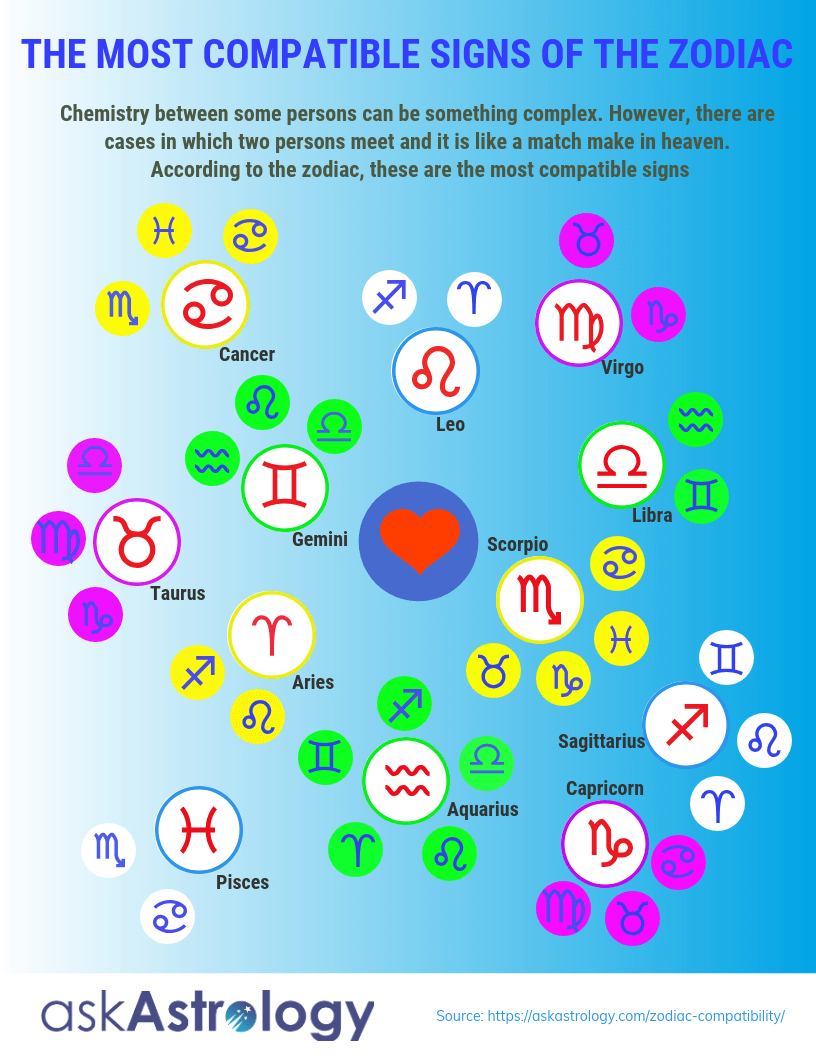 Aries is a fire sign. This gives it strength and energy like no other sign in the zodiac calendar. With that being said, it is often hard to find zodiac compatibility prospects for it due to its highly energized outlook. While this should not be a cause for trouble, the problem arises when another astrology sign tries to overcome or somehow control this energy.

In such a situation, the best match that Aries finds is most probably compatibility in Libra, which brings about a balanced approach to everything. In addition to that, Libra is an air sign, which is naturally a good match for the element of fire, as science too proves that air and fire go hand in hand.

The zodiac sign of Taurus is an earth sign, and this gives it its own set of qualities that play a major role in Taurus horoscope compatibility. As astrologers believe, the element earth tends to favor permanence and no particular change in life. This element generally finds the best companion in signs belonging to the element of water.

This is supported by science too as water favors earth by providing it with prospects to grow. In a situation like this, Taurus finds zodiac compatibility with the signs that include Cancer, Scorpio, and Pisces. A Scorpio, in particular, is a very reliable partner for a Taurus because of how religiously loyal these people are to friends.

Gemini is a sign that speaks of freedom, of liberty, and of a desire to be always on the path of wandering. Due to these habits, it can be hard looking for a partner for such people because relationships require settling down into a bond. While these people are very caring and considerate, settling down is always a challenge for them, which is why they are best suited for people who have tastes similar to theirs. This includes signs like Aries, Leo, and Sagittarius, which are not only wild in their spirits but also possess the energy to put up with all kinds of troubles life throws at them and their relationship. Find out more about Gemini compatibility.

Cancer is a water sign. And just like that, its overall personality traits embody those of water too. A Cancer person tends to find comfort in all kinds of situations and never complains. If you envision water, it can take the shape of any container, and that is precisely what Cancer harbors as a personality trait. Due to this, it is fairly easy to find an understanding and mutual trust with a Cancer person.

However, the signs belonging to the element of earth, like Taurus, Virgo, and Capricorn tend to find better zodiac compatibility with Cancer as compared to the rest.

Leo is a sign ruled by the sun itself. This is nothing to be taken easily, of course, as with such a huge background come great demands in finding a partner. Leo speaks for the element of fire, too, which makes it all the more unique. This energy, coupled with the bravery and valor that Leos possess, requires a very soothing and calm element that can easily take in all of the rages to qualify as a perfect companion. Libra, or Gemini, with their symbols of balance and love, thus take on this beast to be perfect companions. Together, these signs can achieve more than any other combination because of the energy and its drive in the right direction. Learn more about Leo compatibility.

Virgos are shy people, as many astrologers believe. However, there is much more to this outer shell than just shyness. In zodiac compatibility, Virgos tend to fair very good to people belonging to the signs of Scorpio or Pisces. This is primarily because of the water and earth bond that is produced in a match like this one. In addition to that, astrologers favor Virgos to go with Pisces because where Virgos are shy, the emotions of a Pisces tend to invoke a special bond of trust that is very hard to break, and results in a steady relationship. See more about Virgo compatibility with other astrology signs.

As far as Libra horoscope compatibility goes, Libra perhaps fairs the best. You may have heard about that person born in October of how he is dishonest, not very truthful, and all. However, these are the very traits that make Libras get along great with literally every person they meet. These are people of the element of air, and their free will lets them explore everything in sight and beyond. But to limit their zodiac compatibility to only a few signs, it is best that they find a partner in Leo and Sagittarius. This is because the energy from these signs finds the right match in the fuel from Libra, taking both to new heights.

While one may expect them to be always working in favor of evil plans, Scorpios are perhaps the most loyal of friends to find in the entire zodiac calendar. These are people of the element of water and tend to find the right partner in the element of earth. Rest assured, their loyalty towards people they trust will get those places.

However, to earn their trust is an entirely different ballgame. They tend to find their zodiac compatibility with people belonging to the signs of Cancer, Virgo, Capricorn, and Pisces.

With that established, Sagittarius finds a perfect partner in the signs of Aries, Leo, or Libra. This is because Libra comes from the element of air, which acts as fuel for the fire that comes from Sagittarius. On the other hand, Aries and Leo belong to fire themselves.

Virgo, Scorpio, and Pisces are three signs that astrologers believe to be perfectly suitable for a Capricorn person. Be it marriage, professional life, or business dealings, a pair of these is sure to find something to trust each other on and bring any venture to success.

One of the primary reasons that ensure compatibility are zodiac dates that determine the position of planets. In case of Capricorn’s compatibility with other signs, it is this factor of similar positions of the planets that play an important part.

Aquarius is a sign that belongs to the element of air. This tends to make it a free spirit that can’t be contained by anything. To provide the best zodiac compatibility solutions, it is best to pair it up with signs belonging to the element of fire, such as Aries and Sagittarius.

The reason behind Aquarius’ compatibility lies in the zodiac elements. It belongs to the element of air, and thus only favors the signs that either belongs to air or fire. This is just like air acts in nature, where it moves around freely and works as fuel for a fire.

Lastly, Pisces generally tends to find trust and love for people belonging to the signs of Taurus and Capricorn. This comes up as a result of the natural love that earth and water harbor for each other, which are these signs’ parent elements.

The role of zodiac elements is quite strong with Pisces too. This zodiac sign belongs to water, and thus tends to be compatible with any signs that are water or earth. It is easy to deduce this because zodiac elements tend to work just like elements in nature. Water acts as a supplement to earth and vice versa. See Pisces compatibility with other signs.