Points in the Sky (Sun, Moon, and Planets)

Home » Astrology » Points in the Sky (Sun, Moon, and Planets) 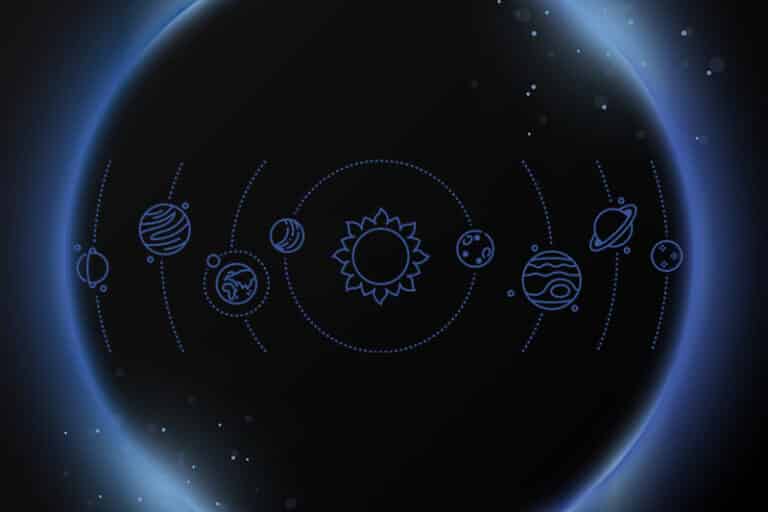 The Map of the Sky at a Certain Moment in Time

An astrology chart is a two-dimensional representation of the layout of the Solar System at any given moment in time. It takes the elliptical, three-dimensional reality and transforms it into a flat circle with glyphs for the Sun, Moon, Planets, Asteroids, and calculated points; slices the circle into twelve sections (representing 12 areas of life called Houses); displays lines for angular relationships between the points (known as Aspects), and shows which signs of the Zodiac apply to each Point and House.

There are many different types of moments that can be identified by the casting of a chart; the most common is someone’s birth. Another common cast chart is an important event, like a wedding, or the moment a business opens its doors to the public, and so on. Below is an example, the birth chart of Abraham Lincoln:

There are Five Keys to Astrology: Signs of the Zodiac, the Points (Sun, Moon, Planets, Asteroids, and special calculations), Houses (and House systems), Aspects, and Free Will. This section of the site focuses on the 2nd Key, the Points.

Points in the Sky

Astrology operates from a geocentric (earth-centered) rather than heliocentric (sun-centered) point of view, which is why planets and asteroids appear to exhibit what is called retrograde motion. The Sun and Moon do not retrograde.

Nearly every month a body in the sky will “go retrograde” or “go direct” (after being retrograde). This article will explain the three phases of observed movement for a planet or asteroid from our viewpoint on Earth. If we were to view the solar system from its true center, the Sun, no astronomical body would show retrograde motion. All motion would appear direct. In truth, even from the view of Earth, all motion IS direct; our relocation of position from the center is reframing the perception of a consistent effect. We see planets and asteroids in direct motion most of the time, in retrograde motion a portion of the time, and in a stationary state (“stand still”) for a very small portion of the time.

For a comprehensive explanation of Retrograde motion visit this article on our website: Understanding Retrograde Motion in Astrology.

Points Most Commonly Used in Charts

For most of human and astrology’s history a cast chart consisted of only the Points in the sky that were visible to the naked eye: the Sun, Moon, Mercury, Venus, Mars, Jupiter, and Saturn. Uranus was discovered in 1781, Neptune in 1846, and Pluto in 1930 and these planets were added to the charts cast in the last half of the 20th century and today. Chiron was discovered in 1977 and has been making its way more and more consistently into new beginner books and websites. askAstrology includes Chiron as a main Point.

Even though the asteroid belt was discovered in 1801 and professional astrologer Demetra George wrote her book, Asteroid Goddesses, on the four largest asteroids – Juno, Ceres, Vesta, and Pallas Athena – in 1986, they, and other asteroids, are not part of mainstream astrology yet.

Lastly there are six important calculated points to consider when learning astrology, four them are related to the Houses and not part of this section; they are: the Ascendant, Descendant, Medium Coeli (Midheaven/MC), and Imum Coeli (IC). The other two are the Nodes of the Moon, which are the points where the path of the Moon crosses the solar ecliptic. One is the ascending (north) Node and the other is the descending (south) Node.

So, for the purposes of casting modern charts and learning astrology as a beginner, the points to learn about are:

How Do the Points Work in Astrology?

To understand how Points in the sky can tell us something useful about human personality or certain moments in life it is important to understand the difference between causality and correlation. Points correlate to aspects of human behavior, but they do not cause human behavior. Professional astrologers would agree with skeptics that a planet is not “pushing people around” from millions of miles away. Mars in Aries does not cause you to be impulsive, it lets you know that you were born at the time when the drive to be impulsive was strong, so there is a good, correlating chance that you will be familiar with that energy and incline to that behavior.

Each point represents an aspect of human life or experience and each of the points from the Sun to Pluto rules a particular Sign and House. To learn astrology deeply or think about practicing it professionally, there is a fair amount of material that must be memorized. This section on the Points will cover the fundamental information that defines each Point.

Which Sign and where (the House) a point resides determines the correlation of the energy of the Sign and the area of life of the House for the individual regarding that Point’s identification. After you read through this section, you will be able to link to pages for each Point that will describe how the Point expresses itself in a Sign and where it wants to do its most significant work (the House).

The various points are grouped according to speed.

The Inner Points move quickly through the Signs, starting with the Moon and ending with Saturn:

Element: Fire
Rulership: Leo | 5th House
Correlates With: primary drive, Life Path, the raw Self, and how you “shine”

Element: Water
Rulership: Cancer | 4th House
Correlates With: emotions, how we give and receive love, our Soul Path, needs, and vulnerability

Element: Air and Earth
Rulership: Gemini | 3rd House and Virgo | 6th House
Correlates With: the way we communicate, how we interpret others, how we solve problems, and what we prefer to learn about and how we learn

Element: Earth and Air
Rulership: Taurus | 2nd House and Libra | 7th House
Correlates With: the way we relate, how we take care of our body, our sense of style/beauty, and what attracts us and makes us attractive; also known as the “lesser benefic”

Element: Fire and Water (before the discovery of Neptune)
Rulership: Sagittarius | 9th House and Pisces | 12th House
Correlates With: expansion, exploration, joy, and opportunity; also known as the “greater benefic”

Element: Earth and Air (before the discovery of Uranus)
Rulership: Capricorn | 10th House and Aquarius | 11th House
Correlates With: rules, structures, consequences, and limitations; also know as the “greater malefic”

Element: Earth
Rulership: New! Co-ruler with Mercury in Virgo | 6th House
Correlates With: wound and healing, both emotional and physical

The interpretation of the Point in Sign and House is an integration of layers of Meaning, starting with the simplest formulas for individual data points.

Since the Sign influences the Energy Point and the House, descriptors apply to the Primary Drive and the way the individual pursues the expression in an Area of Life. So, the abbreviated formula would be:

Also, it is important to understand the Elemental and Quality matrix of the Point in Sign and House, so, “The Sun, a Fire Energy Point, is in a Cardinal Fire Sign in a Cadent Earth House (Fire/Fire/Earth).”

Nuancing, the Real Goal of Interpretation

Nuancing is the practice of identifying and appreciating subtle but important degrees of difference in the multiplicity of information in the chart. “Chiron in Aries” with no chart context is like a solid block of wood. In someone’s chart Chiron is a detailed sculpture.

As you learn more ideas in astrology and apply them to an actual Energy Point in a person’s chart you begin to “get to” the sculpture in the block of wood. With each piece of new information, you “nuance” the data point until it is fully realized. And so, Chiron in Aries in the 6th House is more nuanced than plain old Chiron in Aries. Chiron with the Sun sitting side-by-side Chiron in a chart gives more nuance, and so on.

Chiron was in Aries from 1968 to 1976, so bluntly, without nuancing, this generation of people experience their wounding and healing when they assert their independence or fail to do so. The generation before this group (1960 to 1968) had Chiron in Pisces and experience their wound and healing when they connect to/deny their role in higher consciousness and the pursuit of their dreams.

Here is where the tip of the iceberg above the water ends and the rest of the knowledge expands below the water line. If Chiron is at 0°40’ Aries and is direct (not retrograde), the individual was born with “a new Chiron in Aries.” In a sense, they are on the front line of Chiron in Aries and will feel some of the Chiron in Pisces energy due to my proximity to that Sign.

As a result, they can expect to be wounded by being a dreamer (Pisces) who struggles to assert themselves (Aries), as different from a person with Chiron in Aries in a later degree, who is more likely to be wounded and have to heal from over-asserting himself or herself. Were Chiron retrograde, they would carry the wounding/healing burden/responsibility internally and be more likely to wait until much later in life to do the healing work. The direct energy is more readily manifest and active.

Moving forward with even more nuance, the Signs are made up of 30 degrees, which have been broken down into 10° zones called decans, ranging from 0° to 9° (1st decan), 10° to 19° (2nd decan), and 20° to 29° (3rd decan). Each zone has an energetic Ruler from among the Signs that Rule that Element. Thus, the example Chiron is not just in Aries, but also in the Aries zone of Aries. They have an Aries/Aries 1st zone Chiron, which makes my wounding actions and healing attempts quite impulsive. Were their Chiron at 12° it would be an Aries/Leo Chiron and at 25° an Aries/Sagittarius Chiron.

Also, there are two essential expressions for an Energy Point: healthy/positive and unhealthy/negative. The negative expression even has a special term … the shadow. We can improve our healing process if we address our wounds openly, with “realization,” or we can “fester” our wounds by obsessing over our failures. When we follow the negative path of an Energy Point’s spiritual lesson, we end up living in its “shadow.”

We still have plenty of “Chiron iceberg” to go. Imagine this Chiron has multiple Aspects with other Points in the chart. At that point it should be apparent how much detail goes into any point in an astrology chart