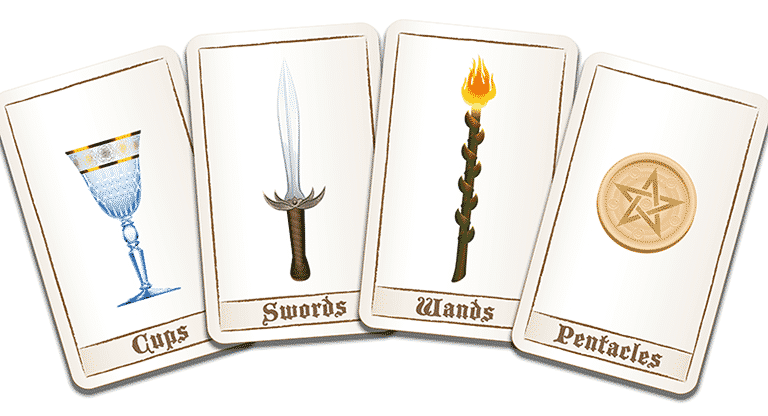 The Fools Journey Through the Minor Arcana

The Minor Arcana represent archetypes, but ones of lesser degree and tied to specific events or patterns that “ride the surface” of the Major Arcana and the archetypes they represent. So, each card, Major or Minor, is an encounter for the Fool, whether the encounter is an event, feeling, situation, or another person.

As the Fool moves through air experiences, she or he learns the lessons of the mind. Moving through earth teaches the lessons of body and the material world. Similarly, the journey through fire teaches spirituality and the lessons of action. And, the “swim” through water helps the Fool learn about emotions.

A few modern tarot decks now try to design their own “roles” for the four court cards found in each minor arcana suit. Most of the time creators keep the original identifications found in traditional tarot decks: the page, knight, queen, and king. Therefore, creators who want gender parity in their decks will sometimes assign the page as a princess and the knight as a prince.

Regardless, the 11th, 12th, 13th, and 14th cards represent pure energy (11), directional energy (12), ordering energy (13), and leadership energy (14). Consequently, pages excite, knights quest, queens organize, and kings lead. Classically trained readers will often assign the court cards to types of people: the page is the child, the knight the adolescent, the queen the mature woman, and the king the mature man.

The Fool will be and encounter all these court cards. Even if the Fool (you) is male or female, a person still expresses and processes all gender assigned traits. As a result, there is masculine energy in women and feminine energy in men.

Drawing Minor Arcana cards in a reading indicates a need to focus on those areas of life in specific ways. If you are doing a 10-card spread you will likely draw a mix of Major and Minor Arcana cards. If you have multiple cards from one suit, at least one card from each suit, or no cards from a particular suit, take note. Multiple cards indicate a need to focus on that area of life. At least one of every suit indicates the question touches every area of your life. And no cards mean that area of life is not a focus or not directly activated by the question.

The Minor Arcana contains four suits, representing the four elements: air, earth, fire, and water. Each suit has 14 cards, numbers 1 to 10 with four court cards. There are symbols for each suit and the most common ones are: swords for air, pentacle coins for earth, wands for fire, and cups for water. The actual names of the court cards can change from one deck to the other, but the most common ones are the page, knight, queen, and king, in that order.

The most common image for fire in the Minor Arcana suit is the wand. Other images range from spears, staffs, torches, arrows, scrolls, and so on. Basically, any long and cylindrical wooden shape represents this element, unless the creator happens to decide to use a flame.

The Fool learns the lessons of spirituality, dynamic action, and creativity from fire. Since fire is ever-changing, always “in motion”, and generating energy, it is the symbol for action. The suit of fire is a masculine energy. If a fire card appears in a reading, here is the basic message or lesson for the Fool.

The Suit of Wands Cards

The most common image for water in the Minor Arcana suit is the cup or chalice. Other images range from bowls, waves, teardrops, hearts and so on. Basically, any shape for containing water, a form of water, or symbol for emotions represent this element.

The Fool learns the lessons of feelings, emotions, and relating from water. Since water adapts, can be deep and/or vast, and is necessary to sustain life, it is the symbol for emotions. The suit of water is a feminine energy. If a water card appears in a reading, here is the basic message or lesson for the Fool.

The Suit of Cups Cards

The most common image for air in the Minor Arcana suit is the sword. Other images range from arrows, clouds, wings, daggers, and so on. Basically, any cutting weapon or symbol for the sky represent this element.

The Fool learns the lessons of thought, logic, analysis, and decision-making from air. Since air is aloof, detached, and the “highway” of communication, it is the symbol for communication. The suit of air is a masculine energy. If an air card appears in a reading, here is the basic message or lesson for the Fool.

The Suit of Swords Cards

4. The Suit of Pentacles (Earth)

The most common image for earth in the Minor Arcana suit is the coin with a pentacle inside. Other images range from stones, crystals, tools (hammer or hoe), plow, and so on. Basically, any material of earth or tool for building or farming represent this element.

The Fool learns the lessons of finance, health, manifestation, and work from earth. Since earth is grounded, practical, and concerned with security, it is the symbol for needs and safety. The suit of earth is a feminine energy. If an earth card appears in a reading, here is the basic message or lesson for the Fool.

The Suit of Pentacles Cards

The Fool’s Journey through the Minor Arcana cards is an initiatory path leading to greater enlightenment through daily lessons. So, the Minor Arcana offers structure and patterns based on the elements and what aspect of human life they rule.

About the Fifth Element

The ideas and roles of the four classical elements comes from ancient Greece. Earth, water, air, and fire explained the world based on several characteristics. Ancient scholars believed that everything (from people to plants to animals to minerals) was a combination of these four elements.

It is interesting to note that some of the most esoteric texts dealing with the classical elements from ancient Greece sometimes mention a fifth element, usually called aether or quintessence. The fifth element represents what is beyond or greater than the other four elements. Thus, the quintessence is the equivalent of the Major Arcana in the deck, something harder to define but more impactful and ineffable. The divine, spiritual aspect of quintessence is a good fit for the spiritual journey of enlightenment provided by the 22 Major Arcana.