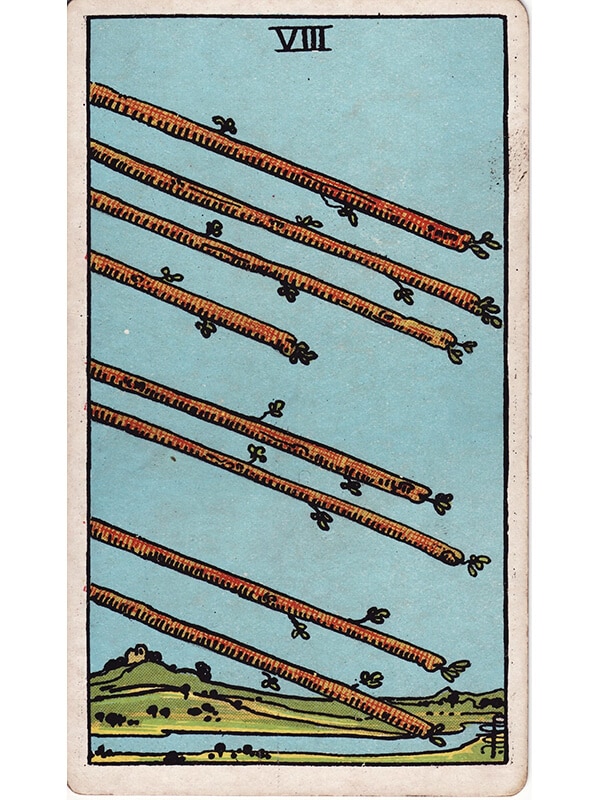 Swift movement, a sense of purpose and action, the Eight of Wands embodies the ever-increasing speed that we experience in the modern world. When you go with the flow, everything seems to fit in perfectly, and everything goes right. But whenever you try to swim against the tide and encounter the reversed meaning of the Eight of Wands, you are bound to be losing a lot of time and energy in your struggles.

This is one of the few minor arcana cards without a human character present on the illustration (at least in the Rider Waite Smith tarot deck, though some modern decks have decided to include one).

The Eight of Wands are displayed on the card in parallel, with a slight downward angle, as if they were javelins thrown in unison from the distance and about to hit the ground. Even without any human presence, there is an undeniable sense of motion radiating from this minor arcana illustration, probably strengthened by the simplicity of the design choice.

The obvious feeling of movement perceived when looking at the illustration is the perfect embodiment of the Eight of Wands meaning. A sort of narrower interpretation of the Chariot, this card deals with movement and motion both literally and figuratively.

The nuance brought by the Eight of Wands is speed. This change of state or location from one spot to the next is performed swiftly and efficiently, without delay or obstacle. Combined with other cards in the reading, it can provide a sense of urgency or imminence to other aspects highlighted in the suit of Wands in the tarot spread.

On a more figurative level, the Eight of Wands also represents communication and messages (particularly relevant in the age of information, where electronic messages can be sent even more swiftly than the perceived speed of the javelins on the illustration), and the consequences of a specific action, and putting it under the spotlight.

When the Eight of Wands appears in a love reading or a love-based spread, it is a rather positive sign highlighting smoothly flowing communication within the couple. It means that the Querent and their loved ones are mostly on the same wavelength, sharing goals and projects together.

When physically separated, it can also show how communication flows between them and keeps their strong ties alive in spite of the distance.

If you are a student, then drawing this card indicates that you should tune out the distractions in life and concentrate on your academic goals. Put socializing aside and make your educational pursuits your primary focus; you need to secure the future education promises with hard work now.

If you are doing work that is necessary, but not a career, then you need to make work your priority. Whatever you do, you need to be “laser-focused” to accomplish your tasks and perform at the highest levels with your work.

If you are in your career, and the Eight of Wands appears in a reading, then you to “let nothing get in your way”. You either have or need to create an opportunity to make a huge leap forward with your career. Do not hesitate! Now is the time to put all your attention on your goals and make them manifest.

When the Eight of Wands appears reversed in a tarot reading, the notion of movement is still there but now there is an obstacle that must be overcome. Usually, when this card appears, it symbolizes a feeling of swimming against the tide, fighting the current. The usual result of such behavior is a source of chaos, frustration, and potential delays in your planned schedule.

When context refers to more intellectual or spiritual matters, it might be a sign of internal dispute or inner struggle between conflicting ideas that cannot seem to fit together. Other cards in the reading might offer some clue toward a potential resolution of this inner conflict, though there usually be a price to pay or a sacrifice of some kind to make.

A reversed Eight of Wands conversely shows a broken pattern of communication, leading to more and more arguments and disputes about matters both important and futile. Indeed, the reversed Eight of Wands tells us that these disputes are not caused by the various pretexts found to trigger them, no matter how serious, but by faulty communication between loved ones that must be dealt with because dealing with the motives brought forth in the disputes will solve the root cause of the recurring problem.

When this card appears reversed in a question about school, work, or career, then you will be blocked no matter how hard you try to move forward. Best to retreat, regroup, and try to make the push forward at a better, more opportune time. Things are not heading in your direction and if you try to go against the tide, you will be swept away.