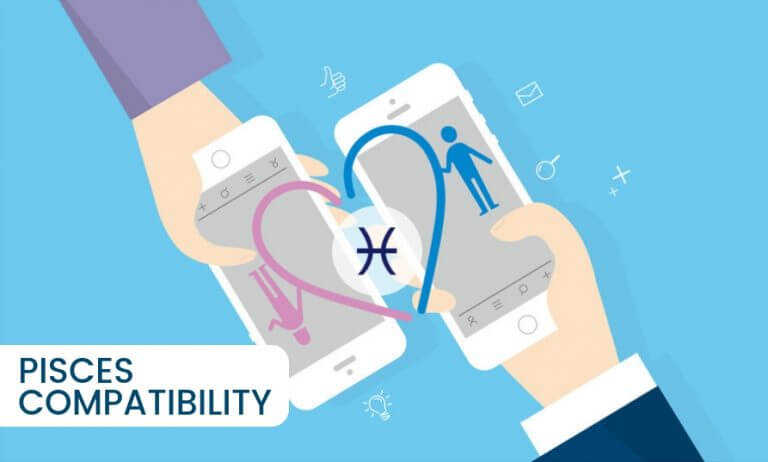 For a Pisces in love, Scorpio and Capricorn are also good options. Signs that do not qualify as the best match for Pisces include Gemini and Sagittarius. Pisces love compatibility feeds off the calmness and composure of other zodiac signs in order to create a balanced couple. However, this is not a topic that can generally be discussed and needs separate information for each pair of Pisces compatibility.

Pisces can understand other zodiac signs because of their intuitive ability. This intuition could help them learn many things about their partner, even more than the partner understands himself or herself perhaps. This means that when Pisces dates an Aries, they would understand their hidden personality under all the brashness and boldness; it would make them tolerate their partner’s intense attitude better. Pisces and Aries compatibility gives a good chance for the partners to form a compatible relationship if the Pisces partner has a good tolerance level, which wholly depends on their environment.

Pisces and Taurus have the potential to enter a happy relationship. Within the zodiac, they are only two positions apart, and such signs are believed to have karmic ties and a lot of understanding for each other. While Taurus is humble and holds a very practical approach towards life, Pisces is dreamier, less practical and impressionistic. In a relationship, they both value stability and harmony.

The coming together of Pisces and Gemini results in a compassionate, mutually satisfying couple. Gemini is rational, silver-tongued, spontaneous and intellectual. Gemini being highly cerebral can help dreamy Pisces covert their dreams into reality. On the other hand, Pisces is naturally very sympathetic and can very well connect with others on an emotional level. Both, Pisces and Gemini are equally open-minded, flexible, lively and capable of having a good, productive conversation. Hence, the relationship relation formed between Pisces and Gemini is based entirely on communication and flexibility.

Pisces can find a sensitive and caring partner in Cancer, who can have a good match with their emotional instability. Pisces and Cancer compatibility also improves due to their intuitive nature, which both sign use in abundance. It is the intuition between Pisces and Cancer that draws them together to each other. No matter how different the society or the circumstances are, this zodiac love match will eventually find themselves in each other’s arms. The Pisces compatibility with Cancer has a good chance at overcoming financial issues, racial issues, family disapproval, religion, and several other obstacles.

In a relationship, Pisces and Leo each enjoy the new perspective the other partner brings in. Leo is an aggressive, strong sign that likes to dominate everything and would only do whatever they desire. They are not the kind to be instructed. On the other hand, Pisces is reserved, thoughtful and much quieter. While the two tend to be quite the opposite, at heart both are dreamers. In a relationship, they have the potential to have an equally beneficial relationship where Pisces and Leo are so caring that each can fill the void of the other. This is the reason that Leo is believed to be most compatible with Pisces.

The coming together of Pisces and Virgo in a zodiac love match results in a healthy relationship. Since they are opposite signs, they tend to make up for what lacks in the other, and hence, can form a well-balanced relationship. Pisces and Virgo are flexible, kind and like to spend much of the time helping others as well as each other.

When Pisces and Libra come together, the result is a friendly, even-tempered, compatible relationship. Both the signs are about beauty, art and dreams yet, they have a lot to teach and offer one another. When Pisces gets too dreamy, Libra can help bring them back on the track and similarly, Pisces can teach Libra to be more sympathetic and caring in love. The love between Pisces and Libra is based on honesty and companionship where both value peace and harmony in a relationship.

There is an intimate understanding between Pisces and Scorpio; they also have a great chance at forming a compatible relationship due to their similar elemental signs. Both, Pisces and Scorpio, are water signs, they have an inherent quality of being emotional, which at times can overwhelm them.  The emotional depth of the signs also attributes an intuitive quality to the relationship that can help them build a stronger companionship as well.

Pisces and Sagittarius square each other on the zodiac wheel, which results in some initial conflict in this interaction. There will be minor disagreements between these two; however, the power of their will and love can get them through any challenges. Both Pisces and Sagittarius are ingrained in their awareness of reality, and the biggest challenge will be to see eye to eye.

Just like two pieces of a jigsaw puzzle that fit perfectly well together, Pisces and Capricorn in a relationship are absolute goals! This is all thanks to the special part that Pisces compatibility plays in general where it tends to be friendly and joyful to every other person it meets, plus the help from the basic rules of astrology like the zodiac elements and Pisces dates.

Pisces compatibility with Aquarius will have a sanguine disposition, as fascinating as it is, it can quickly become cumbersome in such a relationship. Pisces with Aquarius will feel emotionally detached because Aquarius has an inherent aloofness, Pisces will be quite distraught by the lack of emotional sensitivity in their partner. Although, Pisces and Aquarius partners share qualities such as compassion and kindness, however, they will have a hard time implementing them on each other due to their emotional mismatch.

There will be a mystical and ethereal romance between Pisces and Pisces partners; they will enjoy a fantasy relationship that can turn sour in a moment’s notice. Even if the Pisces compatibility with Pisces is good, they might find themselves in troubled waters often.

New Moon
The moon is currently in Taurus
We use cookies to give you the best experience. Continuing using this site we assume that you are happy with it.Ok