The Decans of Aquarius 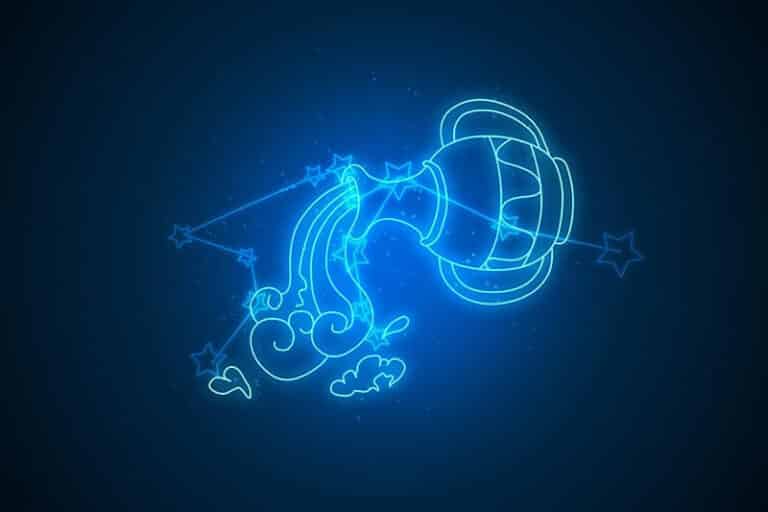 This year we enter the zodiac territory of Aquarius on 20 January 2022.

The zodiac sign of Aquarius is named after the constellation of Aquarius the Water Bearer. Although it is an air sign, this is airborne water, just as the clouds bear water.

Aquarius is the eleventh sign of the zodiac and represents the concepts of what Classical astrologers called “Bona Fortuna” (“Good Fortune”) and the “House of Good Spirit.”

Aquarius is a fixed air sign. Its traditional ruler is the same as Capricorn, is Saturn, a stern planet of self-reliance, self-discipline, duty, responsibility, conservation, patience, limitations, and restrictions. Not all astrologers accept modern planetary rulers but for those who do work with them, the modern ruler, Uranus, planet of innovation and rebellion, is Saturn’s opposite, reflecting an essential contradiction in these natives, one minute, conservative and fixed in their habits, the next, quirky or even eccentric.

The zodiac signs paint a ‘typical’ portrait of a person born at a particular time of year, in a particular season. A baby born in summer arrives into a different physical environment from a winter baby; with differences in temperature, hours of daylight, maternal diet during pregnancy, and so on, with potentially different effects on the baby’s physical makeup and constitution.

The major arcana Tarot card for Aquarius is The Star, standing for individualism, Humanity, Hope, Inspiration, and recovery from sickness or despair. Aquarius is communicative, humanitarian, progressive, fraternal, optimistic, and idealistic. The shadow side? Every sign has one. Aquarius can be a crusading zealot, self-righteous, selfish, or mulishly obstinate.

The archetypes of Aquarius: The Teacher, The Reformer, The Revolutionary, The Whistle-Blower, Truthteller/Preacher, The Exile, The Scientist.

The court card of Aquarius is the King of Swords, although in reading the Queen of Swords may equally be used to represent an Aquarius-born native, whether male or female.

As one of the fixed signs Aquarius, while often lively, is extra resistant to change, although people with the sign of Aquarius prominent in their horoscopes are famously individualistic and tend to have a range of active interests. Aquarius is the most independent sign in the zodiac, intellectually sharp, good at handling abstract concepts, and quick to absorb new information.

But of course, there is no such thing in reality as THE Aquarius personality. You are a unique individual. Your zodiac sign (sun sign) is a major keynote, but it is nothing like the full picture in real life – or in astrology.  There are many other factors in play, your rising sign, your Moon sign; the planets in your houses, your decan, and the degree of the actual day you were born.

What do we mean by the decans?

The Zodiac is a belt of the sky we see from earth, tracking the path of the sun across the sky over the course of the year. We call this pathway of the sun ‘the ecliptic,’ and the zodiac belt shares this same pathway. The paths of the Moon and visible planets are within the belt of the zodiac. The Greeks divided this belt into twelve sections, using twelve for ease of arithmetic, and named them after twelve constellations: Aries, Taurus, Gemini Cancer, Leo, Virgo, Libra, Scorpio, Sagittarius, Aquarius, Aquarius, and lastly, Pisces.

Each of these designated zodiac signs represents a 30-degree section of the zodiac belt. Each sign is then further sub-divided into three blocks of ten degrees, each about ten days in length, with slight variations. This gives us the ‘decans,’ from the Latin meaning ‘ten’.

They have been nicknamed ‘the thirty-six faces of astrology,’ adding more human faces to the portrait gallery, breaking down the story of each zodiac sign into three, more in-depth chapters, affording extra insight into your sign, and what it means for you in real life.

These are complex individuals, containing an innate contradiction. On the one hand, ruled by Saturn, they are serious, intelligent, hard-working, responsible, and conservative by nature, fixed in their habits and responses, obstinate even. On the other, they are co-ruled by Uranus the innovator and rebel, and this might mean they are a rebel either with or without a cause.

They are well-meaning, likely to sign up to charitable causes, keen to contribute, and kindly unless they feel emotionally challenged when they are easily wounded, and the recovery of their self-possession may be slow. They have plenty of courage but bouncing back from disappointment is not their forte.

They strive for excellence and often achieve it, whatever may be their field of work. They are suited to academic life, with a logical, or scientific but visionary turn of mind and a talent for abstract thinking and for research and analysis.

They can also be fun, but while they readily grasp complex and abstract concepts; their emotional intelligence is sometimes in conflict with their intellect, so they may struggle to understand other people at close quarters, resulting in misunderstandings with loved ones.

The second decan of Aquarius is ruled by Mercury, the planet of communications, the ruler of Gemini. These natives have the gift of the gab. They are charming, and socially in demand, but while they are generally very pleasant, they are in some ways rather cool in temperament and not necessarily deeply interested in the needs and feelings of others.  They are usually creatively talented but rather rational with it, analytical and scientific in their general outlook and approach, more interested in ideas, technicalities, and activities than in other people or domestic comforts. This does not mean they don’t have deep feelings. They certainly do, and when they are upset they can rather abruptly lose their cool and turn very quarrelsome. They are, however, very humane and much concerned with big issues affecting humanity on the highest levels.

The third decan is ruled by Venus, the planet of love, beauty- and finance. These natives are generally appealing and attractive personalities, and usually also somewhat more easy-going than Aquarians born in the other decans. They have a keen sense of the ridiculous; more ready to laugh at themselves. The personality is charming yet mysterious, affable yet elusive with an acute sense of humor which they use to defuse and manage challenging situations. They can be something of a court jester, but with many a serious thing spoken in jest.  These quirky, sharp but friendly Aquarians are like shooting stars, nice to see around, and they are easy to approach but may be less easy to understand.

The Cusps of Aquarius

These earliest Aquarius natives are hardworking idealists, born on the Cusp of Mystery and Imagination. They are determined, creative, entertaining, idealistic, witty, observant, and empathetic. They have a lot of drive combined with creative gifts and make kind and generous friends, but they can be so self-reliant that they close themselves off from other people, including those who love them, who may sometimes feel shut out.

These latest Aquarians born on the Aquarius-Pisces cusp are kindly, playful, and creative but also sharp sensible. They feel the world on their shoulders- which is both a blessing and a curse. They feel the influence of both planets; rebellious and innovative Uranus and the deep, dreamy bottomless seas of Neptune. The mind is powerful, likewise, the visions of these highly original people are often described as “offbeat” or “eccentric”. Don’t let this fool you. They are probably psychic but also sharp, intellectually.

2022 is looking like a productive, go-ahead year for you in general, with a focus on cooperation and collaboration. Neptune is doing big stuff this year, especially in April/May. You really can make a lot of progress this year, creatively, professionally, and financially.

The Different Artistic Representations of the Magician Card