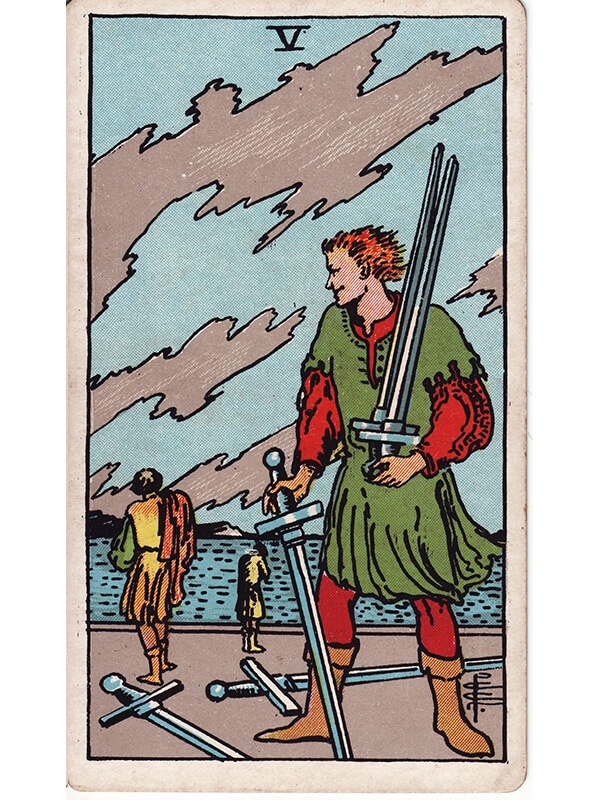 The Five of Swords in a tarot reading is one of several cards that can hint or warn about some upcoming defeat. Contrary to the rather happy face of the main character in the illustration, this is about the losers and what they will need to do to recover from their loss. If you are the victor and are prideful, then the card foreshadows problems that will come with victory, as much as with defeat.

There are three visible characters in the Ride-Waite Smith tarot deck version of the Five of Swords. Two of them are in the process of leaving the scene, moving towards the background, heads down in shame and defeat. In the suit of Swords, this main character in the foreground has a proud smile on his face. He seems to be collecting swords, two piled up on his shoulder, a third on his right hand, and two more on the ground.

You can easily imagine the scene that came before the one displayed on the card. There probably was a sword fight between the protagonists, and the one collecting swords is the one who won.

It is possible to say that the main Five of Swords meaning is not really positive or negative, but neutral. It represents a conflict between various parties, a clash of opposing viewpoints with no real way to find common ground. Even the victor potentially loses since the agreement could not be resolved peacefully.

When you draw the Five of Swords in a love-based tarot spread, it usually warns you about a disagreement about to happen in your love life. The card portends an outcome where one of you must be right and the other will be forced to “retreat” from the battle.

Drawing this card encourages you to take a step back and remember what is important in your relationship. Do not let pride and dishonor lead to the eventual ruin of the relationship, because it probably will not be worth being right if it causes a deep rift emotionally.

Career encompasses school and education if that is your current stage; work that is necessary, but not what you would consider a career path; and your actual career path. Regardless of your current stage of development, the Five of Swords represents defeat, loss, or a setback.

If you are a student and this is your card, then you may be dealing with a failing grade or a disruption in your studies that sets you back from reaching your goals as planned. You will need to regroup.

If you are doing work that is necessary, but not a career, then you may be let go from your job, not because of a performance issue, but because the company has failed or been taken over by another company. Your entire industry may suffer “defeat” and you are just caught in the aftermath.

If you are in your career, then the Five of Swords represents a significant setback, loss of an important contract, or a strike from employees. In any career that lasts long enough, there will be a time of “defeat” where you have to retreat from the “battlefield” in the same way you have made others retreat when you were victorious.

A reversed Five of Swords in a tarot spread further enhances the potential ruin and destruction brought by the sense of defeat and failure in the card. Win or lose, the nature and consequences of that conflict will make it a loss for everyone in the end, like a kind of Pyrrhic victory.

The final negative undertone of the Five of Swords comes from the potential loss of honor and self-respect, coming after the conflict itself, once the subject realizes all the things he or she was ready and willing to do in the name of victory bring shame and dishonor. When you lose part of your identity and values during a conflict, even when you win it ends up being a loss, overall.

Reversed, this card indicates that something is significantly wrong in the relationship and you need to, first and foremost, acknowledge the problem, then decide if it is a deal-breaker or “wake-up call”. You may have said or been told something that “breaks” the relationship in some way, that you may or may not be able to come back from.

When this card appears reversed in a question about school, work, or career, then the defeat is utter and complete, broken beyond repair. The lesson is not in making the effort to “fix things”, but to truly let go. You may have to quit school or change majors, look for a new job or start a new career.