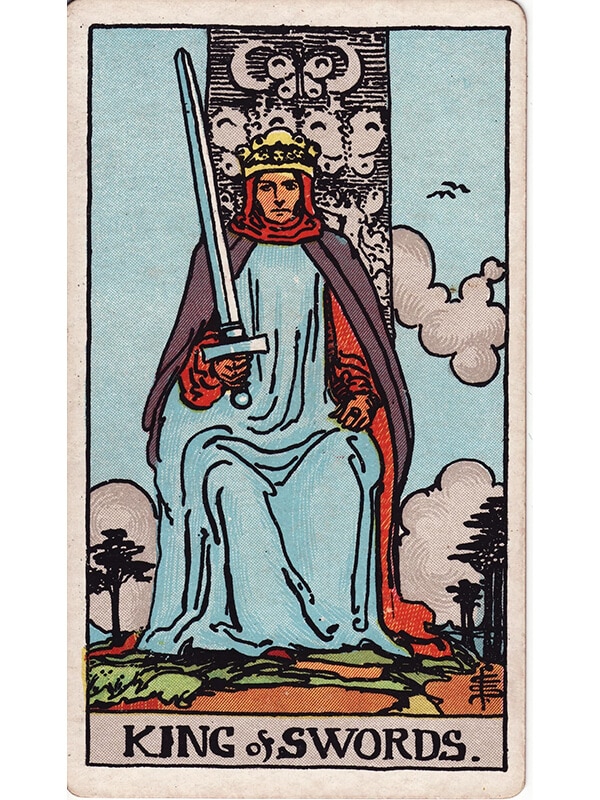 As the final embodiment of the values and concepts of the suit of Swords and element of Air (Libra), the King of Swords is a wise and knowledgeable figure of authority, one that has learned the far-reaching consequences of his actions and has just taken upon himself to use this kind of power responsibly and wisely.

The first thing that comes to mind when looking at the King of Swords in the Rider-Waite Smith Tarot deck is how similar he looks to the character in the Justice card. This is deliberate, as even A. E. Waite mentions it in his Pictorial Key to the Tarot. The king is sitting upright on his throne, facing the viewer, the sword symbolizing his suit in his right hand. He is wearing long, flowing robes and a cape, and the throne itself is barely visible as if it were made of solid air.

There are the usual clouds to underline the presence of the element of Air, too, and a pair of flying birds on the horizon, but the King of Swords still has his feet on solid ground.

As the paragon of his suit of Swords and elements, the King of Swords represents ultimate power and control coming from the mind and the intellect. It is a symbol of authority, with the conviction that he will use this authority wisely and fairly. This combination of authority and the mind creates a kind of militant intelligence, with righteous arguments that are hard to ignore.

The King of Swords ultimately represents a mind with enough experience and knowledge to be able to provide wisdom, too, so he will often be someone you will come to see when you need some advice and want that advice to be based on facts and objective truth. This card represents the sign of Libra in astrology.

The King of Swords is a wise and intelligent man in a position of authority, confident about who they are. He does not need to prove himself anymore, and will often take his time before making any sort of lasting commitment, weighing pros and cons and taking an objective look at the situation before he jumps in, even in love.

As such, the King of Swords is someone you can ultimately count on when he enters a relationship, though the way they obviously prioritize their own mind and values over their actual feelings might make it difficult to create meaningful emotional connections with them.

Career encompasses school and education if that is your current stage; work that is necessary, but not what you would consider a career path; and your actual career path. Regardless of your current stage of development, the King of Swords is about making key decisions to determine where you want to go with your studies, work, and career.

If you are a student, then drawing this card indicates that you need to make crucial decisions that will direct your destiny with regard to your studies. Also, this card can represent the decision-makers in your academic career, like your professors and university administrators.

If you are doing work that is necessary, but not a career, then this card applies more to the people who make decisions about your work and the role you have in your job. You may have some decision-making authority and this card will ask you to focus on those moments when you must be the one in charge.

If you are in your career, and the King of Swords appears in a reading, then you need to determine what choices you need to make and then inform your employees or clients. This is less a card of discussion and more a card of leadership and direction, from above to below.

In context, it might represent a figure of authority above the Querent who is abusing the bond between them. In that case, the rest of the reading should provide clues and advice as to how to deal with them to minimize the power they hold over them. Alternatively, it might represent the Querent in that situation, and highlight a potential danger to misbehave or act without thinking of the consequences. In that case, it is usually not too late to change.

Reversed, this card indicates that you have given up some of your decision-making power and need to regain control. You may realize that the other person’s decisions are not wise or healthy for the relationship. Maybe you even recognize that your decision-making of late has not been stellar. You need to step back and reassess.

When this card appears reversed in a question about school, work, or career, then you need to acknowledge that you have made a poor decision or you are having to deal with others whose decisions affect you negatively. Changes in your thinking and how you respond to those who make poor decisions is needed at this time.

<< Go to the previous card (Queen of Swords)