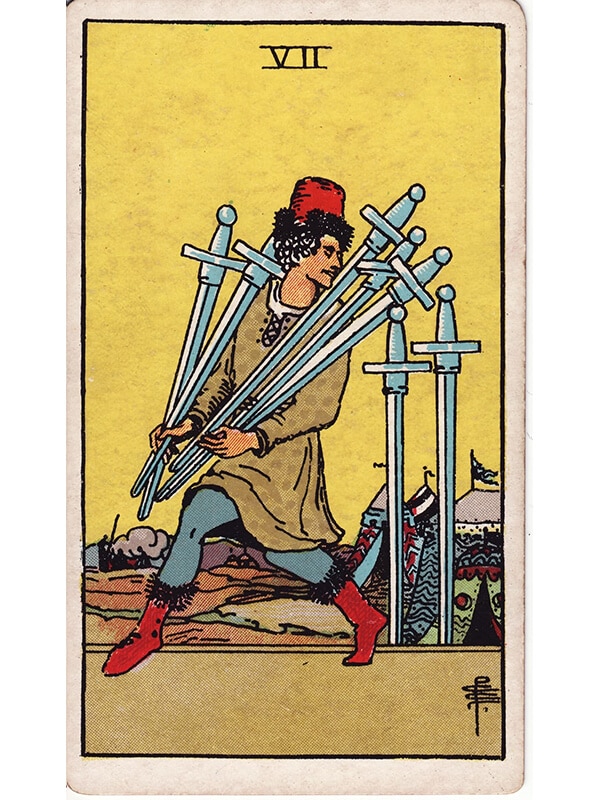 If the Seven of Swords were an animal, it would be a fox. Imbued with energy of cunning, stealth, and survival tactics, the meaning of this minor arcana card definitely communicates self-preservation. As a consequence, when drawing this card within a tarot spread or reading, it is rather important to determine whether the Querent or subject of the tarot reading will be the one taking the swords, which are his to a better buyer, or if they are being stolen?!

The main character in the Seven of Swords tarot card illustration (in the Rider-Waite deck and most derivative tarot decks) is represented sneaking away rather hurriedly from a camp with five swords in his hand. Two more swords are planted on the ground next to him.

The man is presumably stealing these swords from the nearby camp, looking over his shoulder to check whether he has been seen.

The core meaning of the Seven of Swords is not necessarily negative, though it should probably be considered amoral. In more modern readings the action can represent taking one’s own knowledge and skills elsewhere to be valued and appreciated properly.

Traditionally, the action shown in the card may involve betrayal by colleagues or friends quite unexpectedly. In the long run, such a revelation, while painful at the moment, may prove beneficial because you see someone for who they truly are.

A more neutral and less morally ambiguous reading of the Seven of Swords might be that of making plans to overcome adversity through cunning instead of brute force or military might, using mind over matter to overcome unfavorable odds.

The Seven of Swords is the kind of car you might prefer not to see drawn in any reading or spread specifically one dealing with love or romance. It certainly could represent deceit. But it could also reveal the need to think about leaving and seeking a new relationship, which does not have to be done through betrayal. You can just admit or accept that you do not love each other the same way anymore.

The most common lie would be an affair, obviously, but the Seven of Swords also covers a much wider array of thoughts than just dishonesty and lying. If a third party is involved, a Seven of Swords in a love reading might also represent a deliberate effort to sow the seeds of discord within that relationship by spreading lies and falsehoods about one of them to the other one.

Career encompasses school and education if that is your current stage; work that is necessary, but not what you would consider a career path; and your actual career path. Regardless of your current stage of development, the Seven of Swords represents taking your knowledge and skills somewhere they will be valued.

If you are a student, then this card represents a need to change schools or look for a new advisor in your field of study. The study effort you put forth is not getting the recognition and appreciation you deserve. Time to take your interests somewhere else.

If you are doing work that is necessary, but not a career, then you need to brush up your resume and test the market. You may discover you are worth much more than you are currently getting paid. You need to look beyond your current situation.

If you are in your career, then the Seven of Swords represents a need to look for new clients and new vistas for your expertise or products. You might want to look at moving into new markets outside your normal territory. You may already realize that your business needs a bigger audience, requiring you to “pick up your swords” and leave your current circumstances.

A reversed Seven of Swords in a tarot reading tends to deal with the more deceptive aspects of the card’s meaning. It is both a warning and a lesson in humility, when the betrayer is betrayed, and when a cunning plan fails because the other party has outwitted the perpetrator.

On a more personal level, a reversed Seven of Swords could represent someone deliberately keeping secrets from someone they care for, usually with subsequent negative consequences for that person.

If the act of thievery (or any other action that might break the law) was literal, drawing a reversed Seven of Swords might represent getting caught by the authorities and having to deal with the (usually unpleasant) consequences.

Reversed, this card indicates that some form of betrayal may be afoot. You may, in fact, be the betrayer. Instead of acting above board, reversed this card indicates the keeping of secrets or making plans “in the shadows” because you or the other person is not actually happy in the relationship.

When this card appears reversed in a question about school, work, or career, then you should take a much closer look at what you have been promised and what is actually delivered. Reversed, this card indicates deception, falsification, and embezzling. You might want to do an audit of your company, look at all the salaries in and around your job, or see if your professors are inflating or suppressing grades for personal or professional gain that does not reflect fairness or merit.