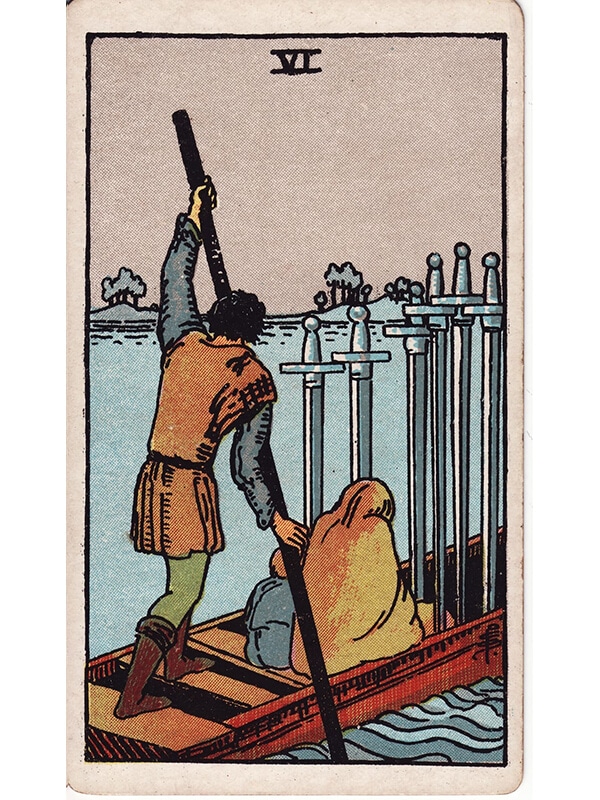 Reversed: resistance to change, worsening situation, and a price too high to pay

All in all, it may be said that the Six of Swords meaning is closely related to personal development, a kind of new awareness arising regarding the subject’s own situation, and a desire to change it for the better and grow, even if some personal sacrifices are to be expected on the path to renewal. The final step of the journey will provide a better and safer place, so any loss or sacrifice should be well rewarded in the end.

The RWS version of the Six of Swords is another scene viewed from the back (which is particularly appropriate here when you consider the Six of Swords meaning). You see a ferryman on a lake or river, carrying two people in his boat. The six swords are all planted on the boat, but it doesn’t seem to be leaking.

It is interesting to note that the ferryman is the focus of the scene, but his tool is a large staff and not a sword, as usually most main characters are somehow using the object of their suit. As mentioned above, the scene is perceived from the back, so the boat and passengers are moving away from us.

Traditionally, this journey differs from the one encountered in the Chariot card, for instance, in that the goal is not necessarily to move to a better position or come as a victor after a challenge, but rather to move to safety, find better shelter, and move from one shore of struggle to another shore promising more safety and security.

The journey might also be figurative, and in that way might represent someone deliberately changing their point of view or position, letting go what used to be important beliefs or values to grow and change as a person, like a rite of passage where you learn to see the world through a different perspective.

The Six of Swords also embodies the concept of transition when it is drawn in a love-based tarot spread. While it could represent a change for the better, either related to increased commitment or newly shared ambitions, it will more often than not echo a more radical kind of change within the relationship, up to and including a potential breakup.

However, even more so in love, the Six of Swords also hints that this transition and change is absolutely necessary because without such change the subject might lose themselves and who they really are. Stagnation brings a bad kind of entropy, and the only salvation comes through change and evolution.

Career encompasses school and education if that is your current stage; work that is necessary, but not what you would consider a career path; and your actual career path. Regardless of your current stage of development, the Six of Swords represents transition, moving from one “shore” of knowledge and understanding to another.

If you are a student and this is your card, then this card represents your transition from one semester to the next or even graduation. You are meant to keep building on your knowledge. The beginning of a course is like casting off from a shore and the journey through the class is a boat over the water. Completing the class is the arrival of the boat on the other shore.

If you are doing work that is necessary, but not a career, then you need some professional development to improve your skills and value. You cannot stay put on your “current shore” or else you will stagnate. Look to get new certifications or specialized training that will add value to your importance as an employee.

If you are in your career, then the Six of Swords represents what you need to do in your industry to “get to the future”. The old way of thinking will no longer serve you and you must “cast off” from what is familiar and learn something new to keep your career thriving and successful.

A reversed Six of Swords focuses on the negative outcomes of such a transition or change, the things you had to leave behind. Even when the journey objectively brings something positive to the mix, there is always some part of the self who will look back in longing at the comfort of a past routine, wondering if it was worth it.

When it is combined with other negative cards in the spread (especially the Tower, or a reversed Judgment), it could be a sign that the journey was indeed a bad decision overall, with the cost outweighing the gains, and the mind unable to ignore everything that was lost and convinced that the situation is getting worse.

Reversed, this card indicates that you are resisting a change in your relationship that you know needs to take place, not because you can see a negative outcome, but because you cannot see the “outcome” at all. You just know you cannot stay in the relationship the “way it is”, but fear the unknown of what lies on the other shore and the dangers that may lurk “in the water” you must cross.

When this card appears reversed in a question about school, work, or career, then you are fruitlessly resisting a change in your thinking and understanding. You can stay on the current shore and not get on the boat, but you will likely get left behind by resisting the transition. Or, maybe you are on the boat and simply giving into dread about the journey into the unknown. Either way, you have to shake off the resistance and change your perception to something positive.