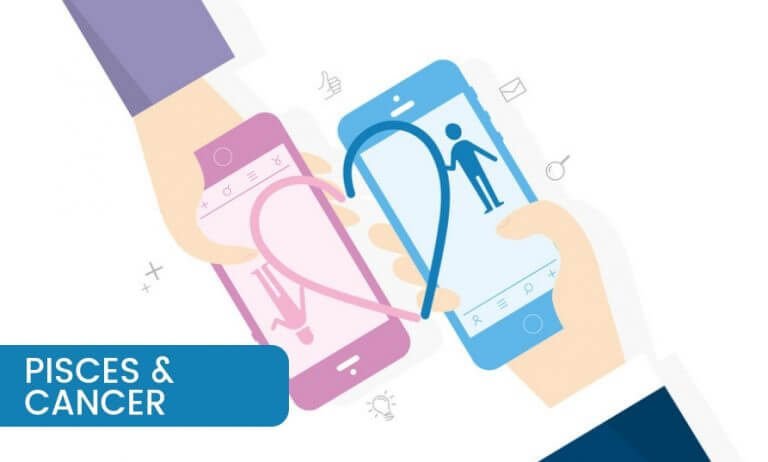 Pisces can find a sensitive and caring partner in Cancer, who can have a good match with their emotional instability. Pisces and Cancer compatibility also improves due to their intuitive nature, which both sign use in abundance. It is the intuition between Pisces and Cancer that draws them together to each other. No matter how different the society or the circumstances are, this zodiac love match will eventually find themselves in each other’s arms. The Pisces compatibility with Cancer has a good chance at overcoming financial issues, racial issues, family disapproval, religion, and several other obstacles.

This Pisces and Cancer couple will also exhibit a highly sensitive side, as both signs have a gentle and fragile nature, which can be easily hurt. The good thing is Pisces with Cancer will know that the pains of sharp words as will their partner, who does not want to be treated badly either. The relationship between Pisces and Cancer will have an honest and open atmosphere, where the partner will feel at ease and can initiate any topic of discussions without the fear of rejection.

Emotional Connection between Pisces and Cancer

When a Pisces dates a Cancer, their journey together will have a serene atmosphere, as neither of the sign has the tendency to explode in the others face. Pisces compatibility with other signs tends to have a depressive phase, as few zodiac signs can understand this dreamer’s world of emotions. Which is why, most Pisces compatible signs tend to share a kind and softhearted nature that can help Pisces control their overwhelming emotions, instead of being irritated. Moreover, there will be a soft and gentle atmosphere of the Pisces and Cancer relationship because of their spiritual and divine connections.

Even though Pisces has a selfless and kind nature, they can be negative and depressive at times due to the social pressure. Cancer has an intuitive ability that can help Pisces cope with these negative effects, which makes them Pisces best love match, hands down. In the same manner, Pisces has the ability to help their Cancer partner deal with their feelings by offering tenderness. They can achieve a strong emotional connection that solidifies their relationship over time.

Most Pisces and Cancer relationship will begin due to an inherent adoration for the other sign; they will be brought together through the mutual values of love and romance. The sex life between Pisces and Cancer is mostly dependent on their emotional connection, which often enough has a very deep root. Pisces yearns for emotional solace through their sex life with their partners; they can achieve this peace with the equally emotionally needy Cancer partner. Cancer becomes most compatible with Pisces as they can nurture the emotional bond with their Pisces partner, they care about offering sexual pleasure to their partner through a safe approach.

The steady approach to love and sex that Cancer uses in their relationship can become a huge turn-on for Pisces partners. These romantic companions will also have a faithful and trustworthy relationship. Cancer is not overly assertive nor passive, which often incites dishonesty from Pisces partners. However, Cancer tends to provide an intimate and happy home to their Pisces partner too quickly, which scares them and causes them to distance themselves from their Cancer partners. It is important for Cancer to gradually introduce Pisces to their loving nature, which will give them enough time to trust them completely.

Pisces man Cancer woman combination has an incredible spiritual connection that can make both signs to be attracted to each other. Both Pisces man and Cancer woman will have an intense and emotional nature that will allow them to share their pain and joy. Neither of the partners will cause big issues, which could potentially ruin the relationship. They have an unspoken and intuitive trust between them that incites them to create a beautiful and loving household. Cancer woman will have the ability to help Pisces man beat his escapist tendencies, which can help Pisces man truly follow his ambitions. While Cancer women can indulge her caretaker nature by keeping their Pisces lover in line and out of harm’s way.  This love match will enjoy an almost perfect union that can deal with highs and lows of life.

The Pisces woman Cancer man combination will have an emotional and spiritual nature; they will enjoy a mutual love for each other. As emotionally active signs, Pisces woman and Cancer man love match can become emotional exhausting at times; however, they can create a loving and permanent home for themselves despite that.  Cancer man will provide a shrewd common sense to their Pisces lover, who tends to become lost in her own fantasy. He will become a pillar of strength for their partner, so they learn to live a more stable and practical life that is filled with moments of romance and love. Pisces woman will bring a serene and calming atmosphere into the relationship; it will allow the Cancer man to become more in touch with their spirituality.

Pisces and Cancer partners can have a romantic relationship with ease, as they have no difficulty starting a compatible relationship. They can form a strong connection that has undertones of compassion, empathy, and feelings of love. As the time progresses, both signs will learn to communicate directly, initially, they should let their intuition lead their relationship. The zodiac compatibility of this couple improves when both signs learn to tackle things head on and learn to nip the evil in the bud; otherwise, it will fester and become a problem for this perfect love match.

Pisces and Cancer Compatibility
COMPATIBILITY SCORE OVERVIEW
This is an indicative score from other readers. For a more accurate match, it is necessary to do a synastry compatibility calculation.
What percent do they match?65 Votes
77
Pros
Spectacular emotional connection
Great sense of understanding
Solaced in sexual attachment
Cons
Need time to gain each others trust
Difficulties in loyalty from pisces
High emotions can cause tensions
77
match