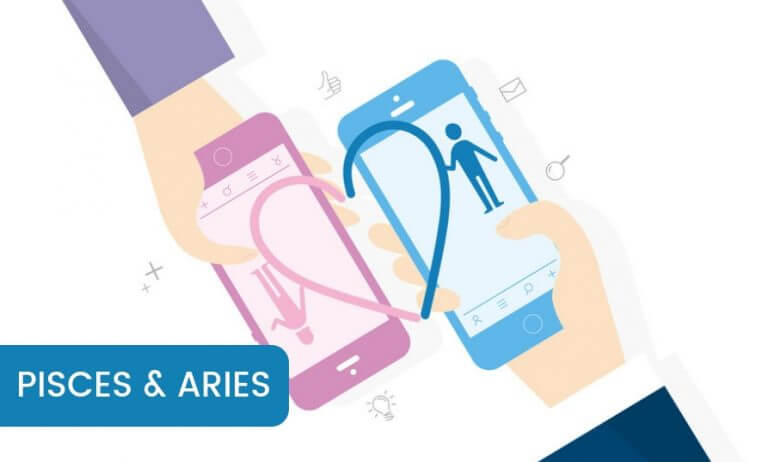 There are numerous types of relationships to explore when considering compatibility between two signs. We grow up in a parent/child dynamic. Outside our family, we form friendships with other children and eventually other adults. We look for and find love. And, we go to work and have careers, interacting with employers and co-workers.

Each sign-to-sign interaction guides our behavior in every relationship. Read through this section to find out how each of the above dynamics works astrologically so you can experience the optimal way to communicate and get along with your sign and all the other signs.

The Aries-and-Pisces interaction is rather unusual. As the “I am” sign of the Zodiac, Aries is independent, face-paced, and likes to take risks. Pisces is the “I dream” sign of the Zodiac and is intuitive, visionary, and imaginative. A long-term relationship (outside parent/child) is certainly possible, thanks to the flowing and adaptive energy of Pisces.

The Aries parent and Pisces child can learn a lot from each other. Pisces is the vast ocean and the rain falling from the sky, while Aries is primal fire. Thus, the two represent the fundamental differences between the elements. However, in the parent/child dynamic, it is the strangeness of the signs that can make them enjoy, but never fully understand one another. The Pisces child can flow with or around the Aries parent, so there is no need for friction between the two.

Aries and Pisces can be good friends, mostly thanks to the easy-flowing and intuitive nature of Pisces. Aries may butt heads with certain signs, in a form of competition or challenge, but Pisces will just flow with the Aries, finding no need to push against the Aries friend. In this dynamic, Pisces can get to have numerous adventures that it might otherwise miss traveling life on its own.

This romance, love, sex combination can be “easy come, easy go” without other factors in the chart anchoring the connection. Neither of these energies incline to be tied down. Aries resists restriction and limitations while Pisces does not feel much need for them. They can have something long-term, almost by accident, if neither of them feels the need to “define” the relationship. Pisces adaptive nature can flow with the wants and desires of any of the signs, so they can be in and out of each other’s lives almost as freely as the Aries and Aries or Pisces and Pisces combination.

The Aries employer and the Pisces employee may struggle from a lack of management from the leadership style of Aries and need for management from the work identity of the Pisces. This situation can lead to a case of too much freedom and “going with the flow” to result in good outcomes for either individual. These two really need another sign as the “go-between” to make the employer/employee relationship work.

If the employer is a Pisces and the employee is Aries, this combination has the same issues as the reverse. In fact, a Pisces employer probably has a chart filled with strong energy from other points in other signs that support tying itself to the material world. Pisces, after all, is the dreamer, spiritual, and imaginary energy of the Zodiac. Once again, this working dynamic would be helped by a managing intermediary between the Pisces boss and the Aries employee.

This combination works well. Mostly you can get the Aries effort with a plus from the Pisces helping out. Pisces is a mutable sign that likes to adapt, and Aries is a cardinal sign that likes to lead, so this pairing has a complimentary function to it (leader and follower), which works better as co-workers than the employer/employee. As co-workers, they are operating within the container of “being employed”, which helps both stay on task.

Pisces and Aries Compatibility
COMPATIBILITY SCORE OVERVIEW
This is an indicative score from other readers. For a more accurate match, it is necessary to do a synastry compatibility calculation.
What percent do they match?264 Votes
62
Pros
Handle each-others differences
Relationship highly compatible
Great sexual potential
Cons
Requires tolerance to build the relationship
Affection can often be one sided
Become very confusing at times
62
match