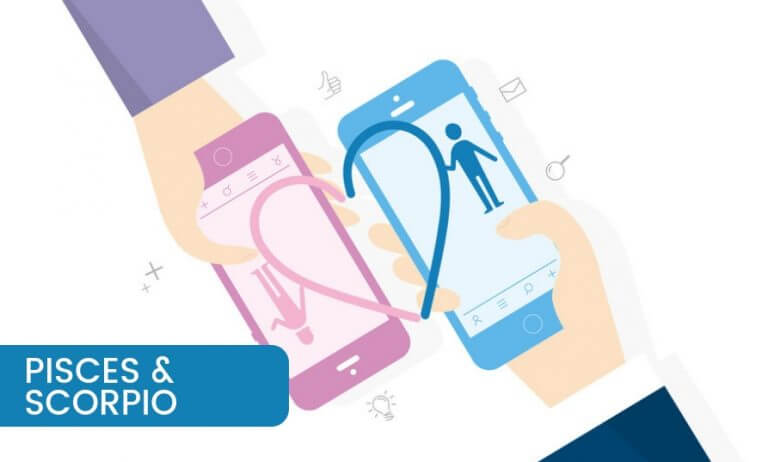 There is an intimate understanding between Pisces and Scorpio; they also have a great chance at forming a compatible relationship due to their similar elemental signs. Both, Pisces and Scorpio, are water signs, they have an inherent quality of being emotional, which at times can overwhelm them.  The emotional depth of the signs also attributes an intuitive quality to the relationship that can help them build a stronger companionship as well.

Pisces with Scorpio will also become emotionally more stable as they would have someone close to understanding their own emotional strengths and weaknesses. Coincidentally, the mutual understanding between Pisces and Scorpio will be a blessing that can help them acquainted with each other’s differences. Both signs will have a good understanding of the other’s need for solitude; they will not get suspicious of the other.

Scorpio is most compatible with Pisces because their need for occasional solitude is often mistaken as being unfaithful, but not by Pisces. Pisces accepts the mysterious and quiet nature of Scorpio, in which they can relax and indulge in their fantasy.

Emotional and Sexual Compatibility of Pisces and Scorpio

There is a strong emotional and sexual influence on the zodiac compatibility of Pisces and Scorpio. Emotionally, they will have a mutual understanding of their others need that will have an otherworldly connection. Pisces compatible signs should have the ability to deal with the emotional and dreamy nature, which can become a nuisance for some other practical signs.

When Pisces dates a Scorpio, they use their kind emotional aura to soothe the harsh and fearsome emotions emitting from their partner. Scorpio becomes most compatible with Pisces in this regard, as they help Pisces find a stable ground as they absorb the emotional excess of their partner, it can help them focus on their ambitions.

Moreover, Scorpio is also a grand contender of being a Pisces best love match because of they just the right amount of assertiveness that can tone down the passive nature of their partner. Scorpio as the fixed sign has a stubborn attitude, while Pisces as a mutable sign as an amiable attitude, which allows these signs to have a harmonious power balance.

The sex life of Pisces and Scorpio has good compatibility as well. The mysterious nature of Scorpio can also be a sign of repressed sexual energies that their Pisces partner can help relieve. Scorpio sign can be a bit too focused on the sensual pleasure that can emotionally deprive Pisces as they emotional satisfaction along with sexual gratification.

Marriage and Romantic Connections between Pisces and Scorpio

Aside from the magnetic dating compatibility, Pisces and Scorpio can also have a strong companionship built on compassion and understanding. However, like many other insanely compatible relationships, this one also has some fair share of hurdles. Scorpio is an emotional sign, which can somewhat improve the Pisces compatibility with it. When Pisces and Scorpio have an issue with the other, it can get emotional and impractical. In such a case, each mishap could ignite more emotional arguments; they will never have a practical discussion over their differences.

If Pisces and Scorpio have some air or earth influences due to their birth-dates, they could become more practical and have an incredibly beautiful relationship. They can also bridge their differences by building a faithful relationship; it could grandly improve the Pisces and Scorpio compatibility. Since Scorpio has a possessive and jealous streak that can cause many trust issues in a relationship, it is up to Pisces to maintain an honest and faithful companionship.

Pisces man can have a kind and loving nature that can often overlook the spiteful nature of the Scorpio woman. Scorpio woman, on the other hand, will hold nothing back if their partner is being unfaithful or depriving her of attention and love. Nevertheless, Pisces man and Scorpio woman have a great chance at building a strong relationship if they can understand the little quirks of their partner.

Pisces woman and Scorpio man share a close emotional bond that has a good probability of lasting for a lifetime. Scorpio man will become fascinated by the dreamy and kind nature of the Pisces woman; they will have an intuitive understanding of their mutual need for emotional sustenance. Pisces, on the other hand, will be charmed by the mysterious and emotional nature of the Scorpio man.

A Passionate Affair of Love

Pisces compatibility with Scorpio has one of the most passionate and romantic life. This zodiac love match has an incredible sexual and romantic attraction to each other. Each sign possesses the ability to balance the highs and lows of their partner’s emotion; they learn to live with it as they understand the other’s nature. At best, Pisces and Scorpio can have an intoxicating and passionate love affair that can become a blissful heaven for both in due time.

Pisces and Scorpio Compatibility
COMPATIBILITY SCORE OVERVIEW
This is an indicative score from other readers. For a more accurate match, it is necessary to do a synastry compatibility calculation.
What percent do they match?114 Votes
76
Pros
Empathetic towards each-other
Have strong sexual attraction
Good emotional understanding
Cons
Arguments caused by lack of communication
Assertive nature causes problems
Can be too emotionalional at times
76
match

New Moon
The moon is currently in Taurus
We use cookies to give you the best experience. Continuing using this site we assume that you are happy with it.Ok