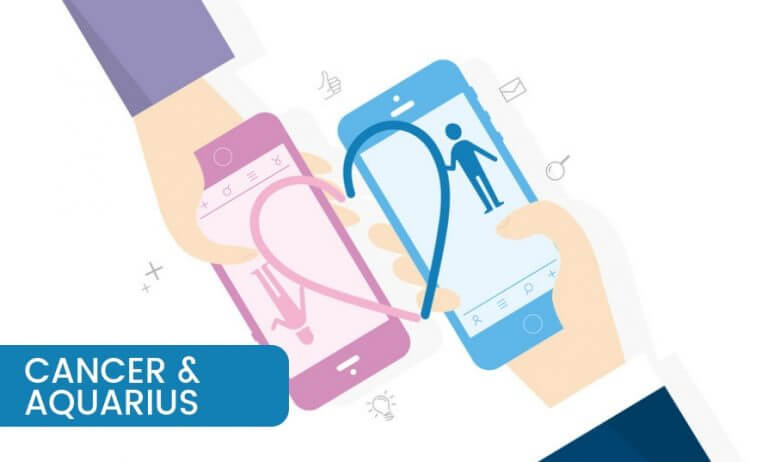 Astrology answers a lot of our questions. These may be pertaining to how a person will turn out to be, how their decisions in certain situations would affect others, or simply, as this article aims to answer if a Cancer and Aquarius are compatible for each other? Cancer compatibility is a rather tricky business, as some astrologers might admit too. The people of this zodiac sign tend to be caring, communicative, and thus tend to be compatible in one way or another with any sign that comes their way. This, of course, does not mean that they would be ideal life partners.

However, the certain tension and absolute no-friendship policy that some zodiac sign combinations exhibit, Cancer compatibility charts do not show that in any case. Let us explore this sign’s zodiac compatibility with Aquarius as we uncover the reasons behind it as well as how it all looks.

The two signs tend to be not too close to each other. Where Cancer and Aquarius might be good at communicating with each other, they have absolutely no idea how to please each other in bed. It is just not how the stars and planets ever interact. A few factors come in to influence a zodiac love match between two signs. In the case of Cancer and Aquarius compatibility, just like any other combination, Cancer dates play a very important part.

The dates come from the very basic of astrology’s principles. As you may already know, astrology involves a belief that every move that the planets make, gets translated into the actions of human beings on earth. So in essence, if a person is born when the planet of compassion is in its position, he is bound to be compassionate. Any relationship dwells on mutual interests and the two people’s similar approach towards life. It can only be the same if the positions of the planets at the times of their birth were the same. Cancer and Aquarius thus do not find much compatibility because the planets tend to be in quite the opposing positions, providing little or no similar interests. This greatly reduces the dating compatibility of a couple that consists of a Cancer and Aquarius.

Another reason behind making or breaking any compatibilities in astrology is that of zodiac elements. Although this is pretty basic knowledge and is often not talked about in detail, we feel it is necessary to provide ample context before simply telling what is wrong. The way of telling what is wrong is equally important.

Zodiac elements are something of a foundation stone for the modern as well as ancient astrology. These four elements are each believed to have a certain set of qualities that in turn form a person’s way of thinking and shape their future. These also help determine which sign is compatible with which one. Before we go on to that, it is important to realize that the best a person could find is themselves only, and so a similar sign or element means a compatible relationship. These elements tend to work like they do in nature. Earth will go well with water, whereas fire always feels at home with air.

In the case of Cancer with Aquarius, however, it gets a little rough. These two signs belong to the elements of water and air, and thus do not sit too well together. Water tends to favor a rather permanent sitting while air always wants to run free and wild. Now that we have complete background information as to why these two signs do not go well together let us comment on a regular day to day life of these two.

This is perhaps the most positive aspect of a Cancer and Aquarius relationship. But this is mainly due to the extremely friendly and talkative nature of the Cancer people that there is always something to discuss between the two. However, given how Aquarius wants to keep on trying new stuff and not really do the same old talking, it does not really take off. Again, communication is not something that could declare Aquarius the Cancer best love match, however, well it tries.

If there were a sign that was NOT the most compatible with Cancer regarding sex, it would be Aquarius. These two signs have a sexual vibe that puts both off each other’s trails. The same old debate strikes here too. Aquarius wants to try new things, spice it up every time the two get together. But Cancer would have none of it. In general, Cancer tends to have a great sexual vibe with signs like those of Pisces, or any other Cancer compatible signs, because of similar interests. But with Aquarius, it just does not fit the bill.

Do Cancer and Aquarius trust each other?

You would think they should, at least Cancer, no? There is a trick to it. With the kind of emotions that Cancer harbors, they are sure always to be honest and truthful, however, if there is any chance of their partner getting mad, they will withhold the information until a better time. This is the same for a Cancer man Aquarius woman couple, and a Cancer woman Aquarius man couple.

Cancer compatibility is much more than all of this, just like any other combination of zodiac signs. It is realizing the true nature of someone through the knowledge that the planets provide us with that can make any relationship work, and that is the purpose of astrology; making people realize that it is not a person’s fault if they don’t do something that you do. If there is love in the air, it can fix anything!

Cancer and Aquarius Compatibility
COMPATIBILITY SCORE OVERVIEW
This is an indicative score from other readers. For a more accurate match, it is necessary to do a synastry compatibility calculation.
What percent do they match?90 Votes
62
Pros
Authentic communication
Similar approach to life
Wonderfully compassionate
Cons
Sexual vibe off putting to each other
Tend to withhold information, causing mistrust
Cancer has a more complex compatibility
62
match