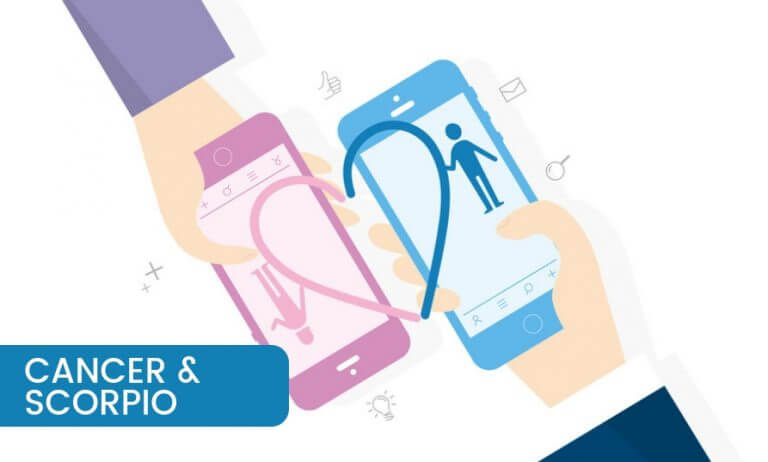 Both Cancer and Scorpio are water signs, and they are symbolized by two sea creatures being the crab and the scorpion. These watery signs tend to live in their own emotional world, with many emotions rushing past them like the waves of the ocean. In a partnership, there is a rare mutual understanding between the emotional undercurrents of the two individuals. They can pick up and sense each other’s emotions like it is second nature, and they can understand each other’s emotional qualities very well.

Cancer and Scorpio are prone to extreme outbursts of emotions; however, they are both extremely in touch with themselves because they allow themselves to express and feel their feelings. Due to their similar natures, this is one of the best matches for these two signs as they generally see eye to eye and understand each other very well. Cancer and Scorpio both need stable partners who will not take their endless devotion for granted, and they can find that in each other.

Cancer and Scorpio Compatibility: A Sensual Partnership of Romance

Cancer and Scorpio are usually instantly drawn to each other upon meeting as both can sense the profound, complex emotional nature of the other. Both these signs require emotional assurance and validity from their partners, and when they come together, there will be plenty of this! Cancer is more openly sensitive, although they cannot help it.

Cancer feels very deeply, and they express what they feel every moment of their waking and dreaming lives. Scorpio also feels exceptionally profoundly, just as profoundly as Cancer, however, Scorpio’s arent as openly expressive as Cancer about their emotions. One generally has to pry the Scorpio open with a crowbar to figure out what they are going through, but not Cancer. Cancer has the unique ability to break through the barriers and walls that Scorpio puts up, and they can get the Scorpio to open up to them in a way that they have never opened up to anyone else before.

When in a partnership, Cancer and Scorpio can care and provide for each other like no one else can. Scorpio does tend to be jealous and slightly possessive over their partner. However, Cancer will rarely trigger any negative emotions in the Scorpio regarding jealousy as the Cancer will be endlessly devoted to the Scorpio and will not show any affection or attention to anyone else.

Scorpio is the sign that rules over the 8th house of sex, death, rebirth, mysteries, and occult. Scorpio has an incredibly passionate sexual nature, and they yearn to connect deeply with their partner on an intimate level. Cancer can provide them the intimacy they need. Scorpio can genuinely be themselves around Cancer, and they can open up about their darker thoughts and emotions.

The Trust between a Cancer and Scorpio

Neither of these two likes to play games, especially when it comes to matters of the heart, and they will always be straightforward with each other. They are equally aware of the pain they can cause each other if they betray, lie to, or cheat on each other, which makes the chances that they will ever hurt each other almost zero. Scorpio needs to be able to trust their partner entirely, or their jealousy might cause some unpleasant situations. If there is a hint of unfaithfulness, the intense emotions will be triggered in the Scorpio, and this can be difficult for the Cancer to deal with.

Cancer and Scorpio have a higher chance of making a marriage last than most other zodiac sign combinations. If the relationship makes it past the initial two years, the chances are high that they will marry shortly after. This rule counts for all water sign combinations; they just do not waste time when they know they are sure of how they feel about each other. If they have children, they will both offer ample emotional support to their children.

Both Cancer and Scorpio want to have children deep down inside, and they will be in mutual agreement regarding starting a family together. They are likely to be excellent parents, as these individuals are very aware of other people’s emotions, including their own children. In a friendship, they will always support each other, and friendship is likely to last a lifetime as they will both share similar interests.

The Cancer man has the rare ability to get the Scorpio woman to open up and be her true self, and show him sides of her that no one has ever seen. The sexual allure will be extremely potent, and they will have life changing sexual experiences together. Usually, when they connect with each other on an intense, intimate level, the bond is unbreakable. The Scorpio woman can be prone to suspicions and jealousy. However, the Cancer man knows exactly how to calm her doubts and make her feel at ease.

Cancer women are incredibly caring, and they have a motherly aura about them. When they are in a good mood, they are a delight to be around, and they have a contagious energy that makes everyone around them feel good as well. The same counts for when they are in a negative space; they can tend to affect others with their negativity. Cancer women are always in heartbreaking situations with men who do not understand her profound, complex emotional nature, and every time she experiences heartbreak, she closes herself off more to prevent herself from experiencing more pain. When she meets the Scorpio man; however, this changes.

The Scorpio man is one of the only signs that can understand where she is coming from, and give her some of the much needed emotional support. The Scorpio man will intrigue her more than any other man has before, and there will always be a mutual fascination toward each other between these two signs. The Scorpio man loves a mystery, and the Cancer woman will be an endless mystery to him with her constantly changing emotions he can never seem to keep up with.

Just like both Cancer and Scorpio can remember the kindnesses others have bestowed upon them, they can also not forget every hurt and ill-intentioned deed that was acted upon them as well. Both of them can tend to hold grudges, and they can hold a grudge for their entire life if the person has hurt them a lot. The main difference between them is how they react to those who wronged them. Cancer will prefer to just brood and deal with the disappointment, whereas the Scorpio will want to get even.

Cancer and Scorpio are both extremely emotional, and at times they can find it challenging to deal with their emotions. There can be times when emotions are flying out of control, and they lose their tempers with each other, as they can both tend to be emotionally explosive. When they argue, it will be quite intense, and it will be challenging for them to see the point of the other person because their emotions blind them. Scorpio can have a sharp tongue when provoked, and their harsh words can sometimes leave permanent scars on the Cancer.

Cancer and Scorpio are both exceptionally kind and compassionate, and they do not shy away from lending a helping hand or a shoulder to cry on to those in need. The thing is that both of them require a helping hand and a shoulder to cry on. Cancer more than Scorpio, but Scorpio also every so now and then, even though they will not admit it. When other people are willing to care for them, neither of them will ever forget the favor. These two are exceptionally sentimental and will hold a kind act dear to their heart for a lifetime.

Cancer and Scorpio are both more prone to introversion and reflecting on their emotions, and they find a mutual harmony in the quiet space they can create together. They value antiques and anything that carries memories of the past with it. Most signs of the zodiac struggle to comprehend and deal with the emotions of the water signs; however, when the water signs come together, they can feel understood. They value family and commitment above all else, and they will find mutual harmony in their home life together.

Cancer and Scorpio are both extreme romantics. There will be no lack of over the top displays of love and overly emotional outbursts in this pairing. They will continuously write each other love letters, buy each other chocolates and roses, and they will have a favorite song they will likely make love to. Cancer and Scorpio have profound, inherent knowledge and understanding of human emotion, and they possess endless amounts of sympathy for others.

The relationship between these two is more based on a deep emotional bond, as opposed to a sexual or mental one. The sexual bond between these two is slow, steady, and lasting. There will not be an initial passionate sexual attraction, due to the attraction being more of an emotional one. The sexual chemistry between Cancer and Scorpio does last, as generally when two signs are initially overly passionate, the flame burns too strong and dies after a while. Cancer and Scorpio know exactly how to keep their flame going.

Cancer and Scorpio Compatibility
COMPATIBILITY SCORE OVERVIEW
This is an indicative score from other readers. For a more accurate match, it is necessary to do a synastry compatibility calculation.
What percent do they match?252 Votes
66
Pros
Instinctual commonalities
Offer mutual security
Excellent emotional union
Cons
Can become too intense or rough
Triggered in case of unfaithful appearance
Possess the quality of being cautious
66
match