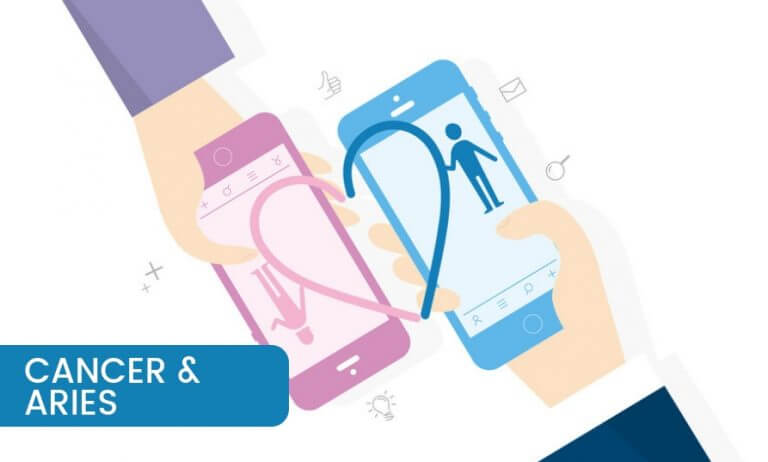 Cancer and Aries are two signs that can be called both compatible and not compatible with each other. What is the reason behind this peculiar statement? Let us find out for you as we delve into the details of Cancer compatibility. As a zodiac sign, Cancer tends to work along just fine with Aries. It is that kind of a fine where you could expect a healthy professional relationship, a good friendship, but certainly not long-term dating compatibility.

According to many people, a compatible relationship is something that demands absolutely everything to be mutually agreed upon. These two signs can go along fine if one or the other compromises at times, which they would give their nature, but that does not work forever. Where a Cancer and Aries couple might be very good at sex and closure, they do not really get along in communicating with each other, and these are the very things that build relationships. Sex is often only seen as a stepping stone.

However, before we move on to explaining the dynamics of Cancer compatibility and how a Cancer and Aries relationship works, let us give you an insight on what actually runs compatibility in astrology and how it affects these two signs. Zodiac compatibility is based on two very basic concepts of astrology. We give you a follow up on each.

This reason is perhaps the leading cause behind why Cancer and Aries lack in what they do because it looks like the only explanation available. Each zodiac sign belongs to one of the four basic zodiac elements, and these, in turn, play an active role in helping these signs choose their compatible partners. It works in a simple manner. Each element tends to give its sign a basic set of personality traits, something of a starter kit, which is then incorporated into the people born into that sign. This goes on to shape their approach to life, and their interests too. For instance, people born with air as their element tend to be freedom loving and always wanting to explore more.

These elements favor each other just like you would expect them to in nature. Earth favors water, while air acts as fuel to fire. When we say the elements are the leading reason behind Aries not being the most compatible with Cancer, it is because these zodiac signs belong to the elements of water and fire. If thought upon closely, these two elements are the absolute opposites of each other, which is evident as both the signs do not know how to improve their communication.

The second reason behind the success or failure of any two zodiac signs’ compatibility is that of planetary positions. In the case of Cancer and Aries compatibility, it is judged by Cancer dates. Zodiac compatibility works on a simple concept. If the planetary positions of two different signs match, they are compatible for each other. In the case of Cancer with Aries, there is absolute closeness in the positions of the planets responsible for sex as well as emotions. The other positions are not too matching, unfortunately. However, the point was to make you realize how important Cancer dates are in determining this compatibility.

Sex and the rest…

With the great sexual intimacy and closure that these two zodiac signs show for each other, one may even declare them to be a zodiac love match. However, there is only one problem. It never progresses from there! But rest assured, with both the signs exhibiting the same preferences in bed, with almost equal levels of shyness too, all they need to overcome is their hesitation to unlock big bangs of pleasure with their partner.

Communication between Cancer and Aries

Communication is one of the reasons that Aries is not known as one of the absolute Cancer compatible signs. A Cancer man Aries woman combination would be something that would falter at communicating with each other. The reason behind this is a shot temper and that too on both the sides. This often results in conversations ending on impulse, without any prior notice, and more often than not, without reaching any point. The exercise necessary to overcome such impulses is to gain more control of your emotions (something at which both the signs, again, show great potential).

Communicating is the only way one can solve their problems, and such issues mean your problems only pile up until they cannot be sorted. All else aside, intellect and communication is one thing that stops Aries from becoming a Cancer best love match.

Emotions between Cancer and Aries

Emotions are something that are not openly exhibited by these two signs. But with our experience in Cancer compatibility, let us assure you that only a scratch on the surface will reveal a tender human, full of emotions and care for their partner. This is the second reason after sexual intimacy that makes Cancer and Aries relationships work their magic. Moreover, it is these very emotions that give these two signs of strength. Both of them tend to wear their emotions as a coat of armor, once they realize that it can be used to their advantage.

People full of emotions are generally seen as weak, however, when a Cancer woman Aries man are together, emotions become their strength as each person understands exactly what the other one needs at exactly what time.

Overall, astrologers do not believe that Cancer and Aries are a couple meant to be, but analyses of history, coupled with how these signs tend to work out have clearly shown that if not approval, they do have potential.

Cancer and Aries Compatibility
COMPATIBILITY SCORE OVERVIEW
This is an indicative score. For a more accurate match, it is necessary to do a synastry compatibility calculation.
What percent do they match?46 Votes
67
Pros
Support each other for growth
Tender and caring
Stable for one another
Cons
Trust can be a key issue
End up hurting each other
Both exhibit leadership qualities
67
match