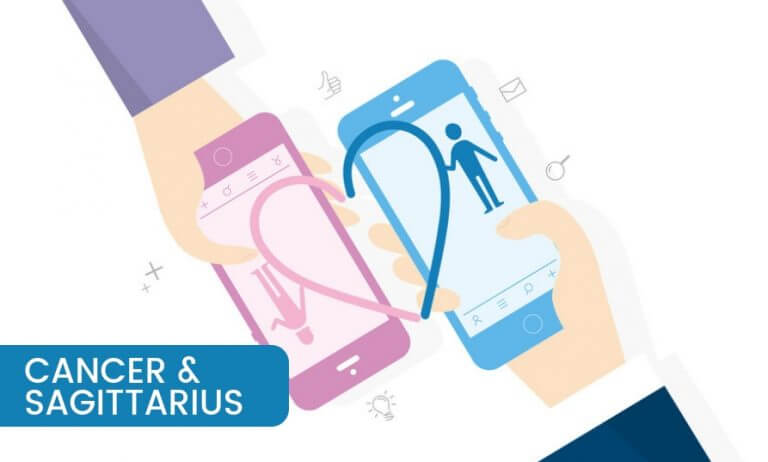 How often have you come across two people who seem to get along so great at times, but right there in front of you, they change to a couple so vicious you are forced to think whether them getting together was a good idea after all? The same is the case with Cancer and Sagittarius. In fact, it is a general trend in Cancer compatibility.

A Cancer person, apart from the signs that are most compatible with it, always tends to find one or two little things that make it come on very good terms with someone. At the same time, there are one or two things that make that very combination get to the throats of each other. This is perhaps because of the emotions of Cancer which let it get to communicate with other zodiac signs easily and on a personal level.

Before we move on, it is important to discuss the very first step that any relationship dwells on, and without which there is not any further progression. Yes, the number one factor that helps determine dating compatibility; sexual intimacy and closure.

Cancer and Sagittarius is a combination that is not what you want to see together in bed. All it could result in is an awkward encounter at best. The primary factor behind this is the fact that where Cancer always looks for an emotional connection in bed, Sagittarius wants it off the top, always. This difference in their preferences becomes the first reason for them not even thinking about getting together in bed.

In addition to that, if these people want to get it together, there is some hope. This is based on the fact that Cancer exalts the planet Jupiter, which is responsible for making their partner feel special. If enough specialty is given, who knows, something might come out of it.

Cancer with Sagittarius: Trusting each other

Nope. Forget this one ever existed. Trust between a Cancer and Sagittarius is non-existent, as astrologers would tell you. And they have actual reasons to back this argument. Sagittarius is a zodiac sign that is ruled by the planet of Jupiter. This gives them a personality trait of being extra sociable.

One would never feel uncomfortable around a Sagittarius person, with their wit, humor, and occasional flirting if you are the opposite gender. However, all of this is not very much appreciated by a Cancer who tends to be emotional as well as possessive, thus ending any prospects of zodiac compatibility between Cancer and Sagittarius.

Cancer compatibility also takes a hit in the field of emotions, taking this companionship one step closer to Sagittarius not being one of the Cancer compatible signs. A very typical battle of zodiac elements ensues in this case. Since Cancer and Sagittarius belong to the elements of water and fire respectively, you may as well imagine how any of their compatibility would work out. Being polar opposites, each side is always in the preparation to effectively outdo the other one, instead of support it in the same direction.

What gets affected in all of this is the prospect of a compatible relationship only. Sagittarius is a fire sign, meaning they are passionate and full of energy, even when it comes to their emotions. Cancer, belonging to water believes in dealing with everything calmly and letting it choose its course in due time. If analyzed closely, these two approaches are in direct conflict with each other, effectively barring Sagittarius from becoming a Cancer best love match.

Do Cancer dates play a role?

After the zodiac elements, it is indeed the Cancer dates that determine whether Cancer and Sagittarius are meant to be together or not. More often than not, the dates and elements do not conflict with each other. However, in this case, where the zodiac elements are going in completely opposite directions, the Cancer dates tend to offer a little ray of hope as there are just a few planets with their positions in harmony. This has led to a significant rise in the communication between the two signs, as well as their regard for values and traditions.

However, it is not so much that it could overtake all others, not in favor of such a relationship. But if a zodiac love match between Cancer and Sagittarius goes on so far as to become permanent, this is the only reason behind it.

Following the previous trend again, there is not much to gain in terms of similar interests too, because of how the stars align for Cancer compatibility with Sagittarius. Belonging to the element of fire, Sagittarius really do have the energy to actually go through labor instead of spending the time to think of ways to do the same thing in lesser time. A Cancer, belonging to water strongly believes in finding their path through nature. This conflict results in problems in all walks of life, be it studying or even choosing something from the menu.

Rest assured, one can be sure that Sagittarius is not the most compatible with Cancer. But with the little rays of hope in communication skills, it sure does make it worth trying!

Cancer and Sagittarius Compatibility
COMPATIBILITY SCORE OVERVIEW
This is an indicative score from other readers. For a more accurate match, it is necessary to do a synastry compatibility calculation.
What percent do they match?138 Votes
60
Pros
Effortless personal connection
Sociable personalities
Effective conversational skills
Cons
Awkward encounters in the bedroom
Difference in preferences and in interests.
Social nature causes lack of trust
60
match