Let’s face it, when you spend some good amount of time with your colleagues or friends, it is not really their education or experiences that would help you understand how they are exactly; it is their personality traits. Similarly, the fact that the moment a Leo enters the door, there is a different aura must do much with Leo traits.

Hence, if you are a Leo or have Leo born family members or friends, knowing about Leo traits would only add more fun and excitement. Being a Leo yourself, it would also help with interaction with others, and fitting well with different responsibilities and task in life. Keep reading to know about these Leo traits.

Leo horoscope personality keeps shedding light on how they are natural leaders. In fact, their very presence tends to inspire others around them. By continuing to listen to their stronger inner voice, they are sure to become even stronger and resilient.

Moreover, Leo, Zodiac’s fifth sign is action orientated, warm and loves to be admired and appreciated by the people around them. Among other Leo, traits are that they are intelligent, courageous and have a very high self-esteem.

The greatest trait of a Leo has to be their giving nature. While most of the people think Leos are all about themselves or are generally very self-centered, might not be true. They are extremely loving, affectionate, caring and generous. These Leo qualities are what makes them different from others.

The list of Leo personalities includes the most notable personalities. These include Roger Federer, Jennifer Lopez, Sandra Bullock, Barack Obama, Daniel Radcliffe and many more. 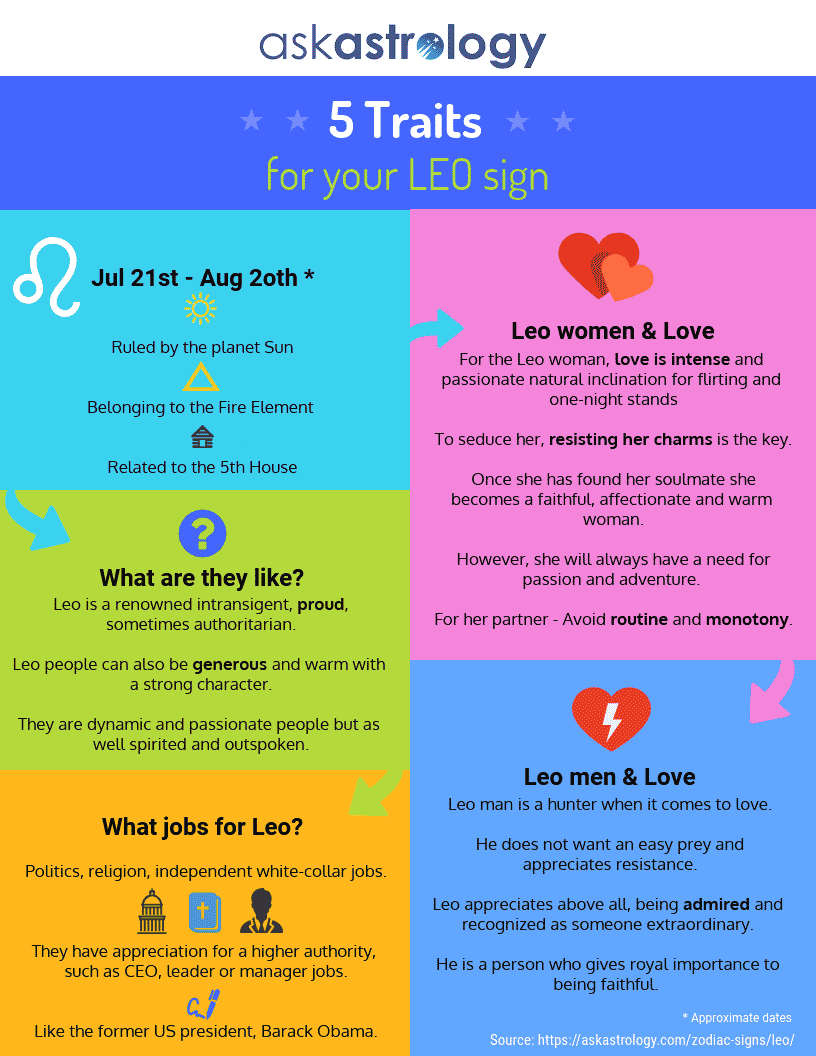 Just like other signs of the zodiac, a Leo has both positive and negative traits. Thus, to know them better or to ensure a smooth relationship with them, knowing these traits is of utmost importance. Overall, a Leo personality is kind and loving and always fun to have around.

The Lions of the zodiac are always known for their helpful and kind nature. Since they have a big heart, they are mostly seen bestowing love and affection on people.

The fact that the Leo zodiac sign is ruled by the sun, they possess a great amount of energy. Wherever they go, they soon become the center of attention and make sure to spread their positive vibes around. This Leo trait enhances the star sign personality.

Moreover, among Leo personality traits, the best one remains to be them being extremely optimistic. They do not get disappointed or disheartened by hardships and setbacks. Rather, they face them well and would always somehow know how to overcome them. You will also find them trying to be always on the top. Of all the Leo personality traits, this one is quite easy to spot

One thing that enhances Leo personality is they do not backbite or mutter words under their breath, in fact, they would simply say what they want. Many people see this as one of the best Leo traits. They tend to be quite frank and honest in this regards.

In addition to this, they do not only demand loyalty from people around them but are themselves very loyal and trustworthy. They value people and relationships a lot. This Leo trait makes sure they are always surrounded by people.

While talking about Leo characteristics, one of the Leo qualities that is recognized as both negative and positive, but mostly former, is them being extremely headstrong. They are opinionated and firmly believe in whatever they do or say. Convincing them otherwise is next to impossible. This is one Leo trait that they must work on.

They are also very egoistic which gets hurt over the smallest possible matters. Most of the time, it is their ego that comes in between their success path. This trait is obvious in people under the Leo star sign personality.

Leo zodiac sign has always been known for being possessive and prone to jealousy. While they tend to be giving, sharing is not something that comes to them easily. The people who love them are seen criticizing this Leo trait the most.

One of the Leo traits that makes them easily recognizable anywhere is that they are always controlling and want people to follow them. This is also what makes them highly unpopular among people around them and results in a lot of criticism.  In fact, in Leo description, this is the majority of the times the first of Leo characteristics that is discussed or put forward on the table.

Their impatience makes them want to get done with things as soon as possible. While this Leo trait could prove to be good at times, most of the times it just results in anxiety, disappointments, and failures.

The fact that they tend to be arrogant is because they are too self-centered that they become harsh and end up saying things that can easily hurt people around them.

However, this does not mean they are bad friends or companions, in fact they are always better than what has always been known about them. The fact that they value friendships and relationships means they would not let go of people only because of their negative traits.

Your True Astrological Horoscope 2020 for the Chinese New Year

New Year, New Me According to Your Zodiac Sign