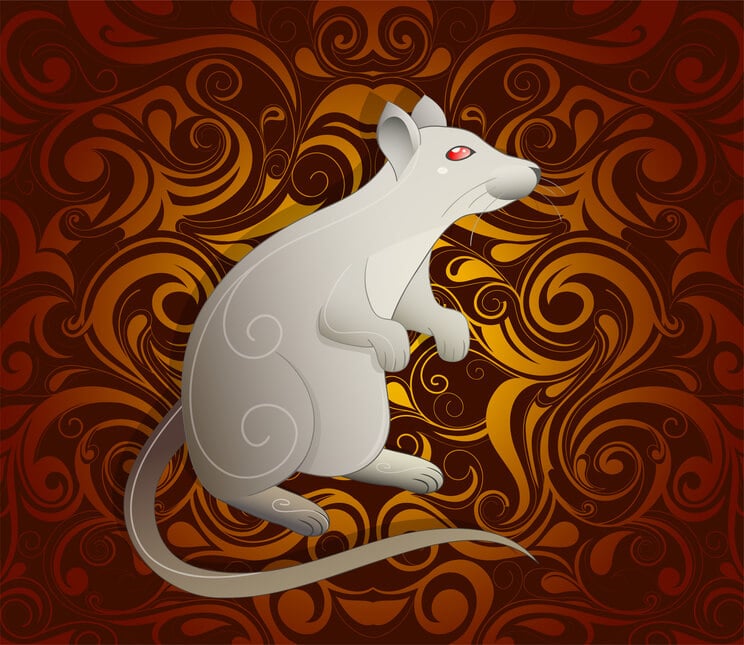 Even though many people do not consider the rat an adorable animal, it ranks the first among the animals of Chinese zodiac. People who belong to rat zodiac were born in 1924, 1936, 1948, 1960, 1972, 1984, 1996, and 2008. The rat zodiac sign meaning symbolizes wisdom, and people who belong to this sign inherit the wit, delicacy, vitality, and flexibility of this animal. The rat carries both yin and yang attributes according to the Chinese Zodiac Yin and Yang Theory, and it occupies the hours between 11 p.m. and 1 a.m. corresponding to the symbol Zi of the Twelve Earthly Branches.

Do you know what your lucky and unlucky numbers, colors, flowers, and directions are? If you are born under the rat sign in Chinese Zodiac, these symbols will bring you luck:

And these signs people of rat zodiac should definitely avoid:

People born under the year of the rat zodiac are intuitive and responsive individuals who quickly adapt to new environments and can recognize and take advantage of opportunities that come their way. Rat is imaginative, curious and observant, who enjoys learning new skills and developing old talents. Knowledge comes easily to them, and they can deal with any difficulty skillfully and come out as victors. Especially quick learners are female rats who are also smart, pretty and lovely ladies who demonstrate quick thinking and mastery in all sorts of arts and crafts. Sometimes, personality can come across as narrow-minded at their workplace because of being opportunistic and picky. They are kind to others but maybe impolite when someone disappoints them in a conversation.

In Chinese Zodiac, rats’ major strengths include being insightful, versatile, adaptive, with quick reflexes, sociable and good in making friends, affectionate, passionate, hard-working, tidy and neat. Among their weaknesses is being timid, suspicious, vain, opportunistic, conservative, cunning, gullible, and changeable.

According to Chinese elemental theory, every sign of the Chinese Zodiac signs has an elemental attribute corresponding to it, such as wood, water, metal, earth, and fire. Rat experience their Ben Ming Nian every 12 years, while an elemental attribute attached to the animal sign (for example, a water rat) occurs once in 60 years. While there are generalized personality traits carried by people who belong to the rat zodiac, there are also specific characteristics given to them by one of the five elements.

If you are born in 1924 or 1984, you are a wood rat in Chinese Zodiac signs. Such people are self-confident, talented, independent, good at establishing and maintaining their own business projects, virtuous, and good team players.

People born in 1936 and 1996 are fire rats in Chinese zodiac. Among personality traits of fire rats are energy, bravery, friendliness, sociability, quietness, and cordiality.

If your birth year is 1948 or 2008, you are an earth rat in Chinese astrology. Earth rats are honest, amiable, serious, modest, flexible, and with a strong sense of self-esteem.

Those born in 1960 or 2020 are metal rats in Chinese zodiac. Among the qualities of these people is being smart, jealous, talented, hot-tempered in work and personal relationships, and having a strong sense of self-awareness.

Individuals whose birth year is 1912 or 1972 are water rats in Chinese Zodiac calendar. These individuals are wise, conservative, talkative, and shrewd. They are strong individuals who are equally a lot about their family and work.

In Chinese astrology, rats generally are energetic and active people who keep fit and avoid illnesses. Maintaining good nutrition habits, exercising regularly, and having enough rest will help the rats to preserve their energy and improve their work performance. When rats in Chinese zodiac experience work-related stress, it will be helpful for them to practice stress-reducing techniques, such as meditation, yoga, and guided breathing. People of rat zodiac often have a timetable reverse from the timetable of others. They like to sleep late and stay up all night. Seeing as they are more productive at night, they prefer to find something to do at late hours, which might leave them tired and may impact their day job.

Business and Career for Rats

People who belong to rat zodiac are careful and acute, which are the qualities that will help them in establishing their own business or other venture. They are adaptable and have big chances to succeed in the industries that constantly change, such as media, advertising or PR businesses. Such individuals can easily overcome the difficulties faced by every entrepreneur due to their cautious character traits.

The best ages for the rats in Chinese astrology to start a business are between 35 and 45 years old. They can find themselves enjoying working in grain and oil, service, or financial industries. Such individuals find it easy to adjust to new environments and possess luck in earning unexpected profits. They are careful, so financial fields where precision is necessary will suit their character perfectly. Rat sign in Chinese Zodiac are sociable people, but they prefer doing business on their own or with the help of just one partner who usually deals with the external affairs of the business.

People of rat zodiac sign will succeed as directors, administrators, managers, writers, entrepreneurs, politicians, researchers, lawyers, broadcasters, advertisers, and PR professionals. When it comes to partnerships, they will find their ideal business partners among the signs of ox, tiger, dragon, monkey, and pig.

Rats’ Relationships with Other Signs

Rats in the Chinese Zodiac calendar are very sociable people and they enjoy having a wide circle of friends and attending social gatherings and events. Even though they like making new friendships, these people do not have many close friends, but rather keep their relationships with others casual. When it comes to romantic relationships, people of rat zodiac are quick to fall in love with someone; however, their romantic partnerships do not seem to last, as they are quick to break off an existing relationship and move on to the next one. Rats’ love and friendship compatibility with other animal signs of Chinese zodiac is based on the unique character and personality traits attributed to the animal sign. Based on these observations, the rat usually has the best love compatibility with ox and dragon, best friendship with the snake, and worst overall compatibility with horse and rooster.