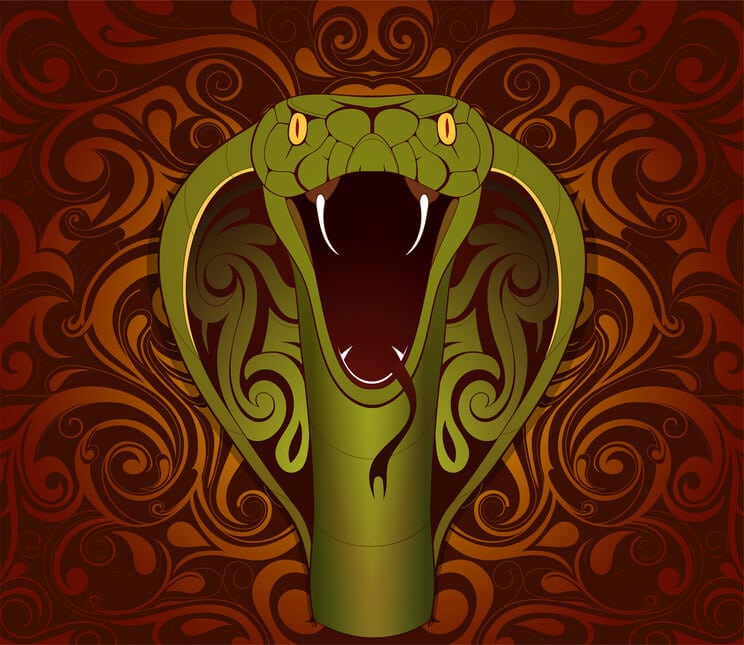 The years of the snake are 1929, 1941, 1953, 1965, 1977, 1989, 2001, and 2013. People born under this sign inherit the agility, attractiveness, and wisdom of this animal, but can also be perceived as jealous and suspicious. Snake zodiac sign meaning is wisdom and wit in Chinese zodiac, and the snake ranks sixth in Chinese Zodiac and carries yin energy according to the Yin Yang theory. According to Chinese Zodiac calendar, the snake is placed between 9 a.m. and 11 a.m. and corresponds to the earthly branch symbol Si, in relation to the animal’s habit, as snake starts its day around the same time when the sun warms up the earth.

Each of Chinese Zodiac signs has its own set of lucky and unlucky symbols such as colors, numbers, flowers and directions. In the year of the snake zodiac sign these are the lucky signs:

Unlucky signs that should be avoided:

Snake excels in hiding and finding a way around dangers to catch his pray. Agile and stealthy, snake rarely gets one taken by surprise unless the danger comes from above. Like their animal sign, people born in the year of the snake are mysterious, agile and cunning. On top of that, they will look calm and cool as if nothing could disturb their inner self. In their relationships with others they are sociable, caring and willing to help, which are the characteristics that make them popular wherever they go. Because people instinctively fear snakes, they perceive them as devious and malevolent, but this is not the case with snake personality. Their behavior and appearance match their intellect, and they are honest and straightforward people.

The signs of Chinese Zodiac each have five distinctive elements that describe their personality in greater detail, such as wood, fire, earth, metal, and water. Every 12 years, snake meet their Ben Ming Nian, their Year of Birth, and every 60 years their elemental sign will appear again in their zodiac animal. By combining the attributes characterizing zodiac animals with those of the elemental sign, Chinese astrology makes predictions about a person’s character and destiny.

Born in 1965, the wood snake in Chinese Zodiac is characterized as creative, determined, and having a good sense of order. They like being mannered and stylish, have good taste, and know the value of things. Snakes have lofty ideas and can become passive if things go their way too easily, so in order to achieve success, they need the cooperation of others.

The year of fire snake zodiac sign is 1977. These people can go along with anyone, as they are intelligent, insightful and innovative. Their weaknesses are lack of patience and impulsiveness.

Earth snakes among Chinese Zodiac signs are born in 1929 and 1989. Being jovial, sensitive and loyal gives them all they need to become the center of attention wherever they are. Moreover, they maintain a great work-family balance and generally work hard and achieve success in their respective fields.

The years of birth for metal snakes are 1941 and 2001 in Chinese astrology. Endowed with courage and power, they are also competent, determined and knowledgeable about how to manage others. Sometimes being overconfident and feeling superior can drag them down.

If you were born in 1953 and 2013, you are a water snake in Chinese Zodiac calendar. People under this sign are adventurous, active and eager to find their place in the world. There is nothing that can stop them, except for their strong self-esteem that comes from having overcome many obstacles.

Snake individuals are consistent, calm and like having everything in order. Thanks to this, they enjoy a life without major health problems. Exercising occasionally and saving plenty of time to relax and spend time with those they feel close to makes them feel better. Having a place where snakes of Chinese Zodiac can retreat and spend time for themselves also helps when things go out of hand. Calm, peace and a workplace where they feel appreciated is the secret for a healthy life for the people born under this sign. They might also enjoy the lifestyle of taking it easy, enjoying the moment, and saving the energy for the times when they must work hard.

Business and Career for Snakes in Chinese Zodiac

Working through thinking hard is what distinguishes these people from Chinese Zodiac signs. They can create wonderful things for the humankind when they do the work they thoroughly enjoy. They can excel in any field where they can use their diligence, creativity and problem-solving skills. People of snake usually enjoy stable jobs and do not have financial problems. They can succeed as entrepreneurs, given their ability to keep things in order and find quick solutions to problems. It is rare for a snake sign in Chinese Zodiac to fall prey to fate and misfortune.

Snakes will find success in such jobs as scientist, sociologist, writer, magician, painter, sportsperson, and psychologist. Their best work partners for snake zodiac sign are roosters, oxen, and monkeys. The only people snakes should avoid in business are tigers and pigs.

Snakes’ Relationships with Other Signs of Chinese Zodiac

Although most snakes are popular among their peers, they do not have many true friends. Once they become friends with someone, they protect and give their all to that friendship, but are often unforgiving when their trust is abused. When their ideal partner who they share common passions with, they can work together and amass a great deal of wealth. Generally, when snakes in Chinese astrology choose a partner, they are caring and sensitive and do everything in their power to make the other person happy. In finding everlasting love snake should go for dragons, roosters and monkeys. In terms of bad matches, snake should avoid the signs of the tiger, sheep and pig.