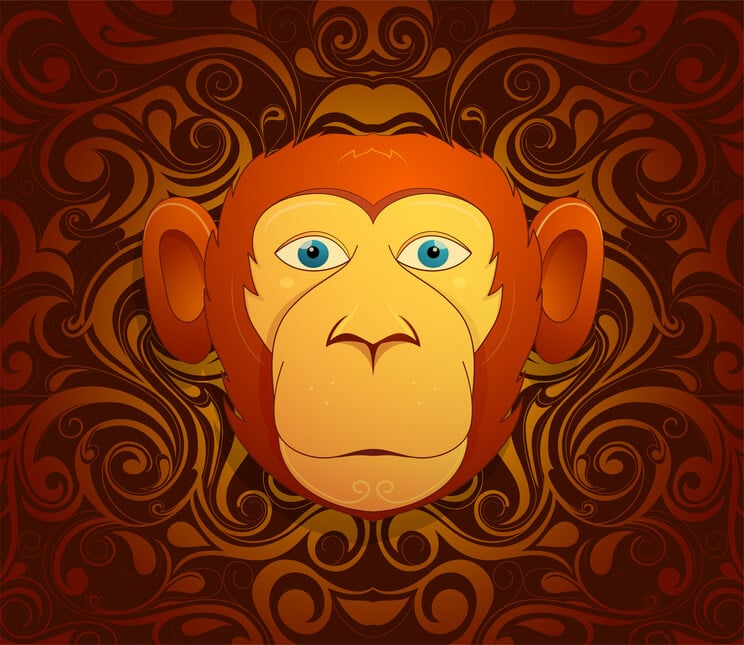 The years of birth for monkeys according to Chinese zodiac are 1932, 1944, 1956, 1968, 1980, 1992, 2004, and 2016. This versatile sign belongs to the earthly branch Shen and occupies the hours between 3 p.m. and 5 p.m., according to the time when these primates are most energetic. Monkeys have yang energy, and monkey zodiac sign meaning is intelligence, wisdom and restlessness. Those who belong to monkey zodiac are cheerful, full of energy, confidence and charisma. They are great at making friends and entertaining others.

Each of Chinese Zodiac signs has lucky attributes that follow them throughout their lives. If you were born in the year of the monkey, you should know these lucky signs that will help you in search of good fortune:

In order to maintain your luck, avoid these symbols, as they are unlucky for monkeys:

This symbol of wisdom and flexibility in Chinese astrology has been appreciated since the oldest times in cultures all over the world. To people under monkey zodiac sign, their animal brings good luck and intellect and sets them up for a life where they can find their place from early age. Not only intelligent but also skillful, monkeys have the ability to succeed at everything they do. They are great at fascinating others with their never-ending talents and easily become irreplaceable in their circles of friends. Thanks to monkey personality, they live long and happy lives where they do not have to worry about financial problems, but they can fall prey to arrogance and selfishness. They may also come across as suspicious and jealous, and it can be hard to deal with them.

According to Chinese astrology, every 12 years, monkey zodiac sign inherits one of the elements, such as wood, fire, earth, metal, and water. Each of these elemental signs appears in the same animal of Chinese Zodiac signs only once in 60 years. Understanding the elemental attributes inherited from one of the five elements helps make predictions about a person’s character and destiny in Chinese astrology.

Born in 1944 and 2004, wood monkeys in Chinese Zodiac calendar are lucky, passionate, smart, ambitious, and responsible. They are good at solving problems and taking leadership positions. Sometimes, they like showing off and being in the center of attention.

The years of birth for fire monkeys in Chinese Zodiac are 1956 and 2016. These people are brave, creative, enthusiastic, talented, and they like being around friends. Because of their ambitious projects, they seem to have their head in the clouds and can get irritated easily.

The earth year of the monkey in Chinese astrology is 1968. People born in this year are versatile, independent, strong, and practical. On the downside, they can be perceived as too focused on themselves.

Metal monkeys in Chinese astrology are born in 1920 and 1980. They have a great sense of humor, are open-minded and confident, and like living their life with ease. Not accepting other people’s views and being impatient are among the things that can stay in the way of their success.

The years 1932 and 1992 belong to water monkey zodiac. These are individuals with strong leadership abilities, brave and decisive. They should keep in mind that speeding up things and being easily irritated might get them on the wrong side of success.

Restless, full of energy and ambitious, monkeys in Chinese astrology sometimes forget that their bodies have physical limitations. Even though generally they have great health because of their cheerful character, they should pay attention to how they feel and take time to rest after long hours of work and exhausting entertaining activities. People under monkey should not forget that their health is a long-term priority. Doing sports and spending time with family is what keeps their energy gauge full and productivity levels high. Moreover, in order to keep themselves away from injuries, monkeys should pay attention to their arms and legs while traveling and exercising.

Business and Career for Monkeys

Being ambitious, versatile and creative gives monkeys great career opportunities. Once they like something, monkey never feel like they work too much and can give their all to their jobs, passions and business. Adding to their success is their love of challenges. They never stay long in one place and catch the opportunities that come their way. They will find success in their lucky directions, which are north, west and northwest.

Monkeys’ Relationships with Other Signs of Chinese Zodiac

Monkeys in Chinese Zodiac calendar are not fond of being lonely and like staying around people that know how to have fun and enjoy the moment. Having friends that they can talk to and share the good and bad moments of their life, together with their outbursts of energy, is what makes them happiest. In their love life, monkeys are gentile and care deeply about their partners.

They desire a partner whose personality will complement theirs and will give them inspiration and motivation toward achieving common goals. Having dynamic characters, they will never get bored or stumble upon days where they will not know what to do. In romantic relationships, Chinese Zodiac signs of rats, snakes and dragons seem to be the best matches for monkey, while their worst compatibility is with tigers or pigs in Chinese astrology.