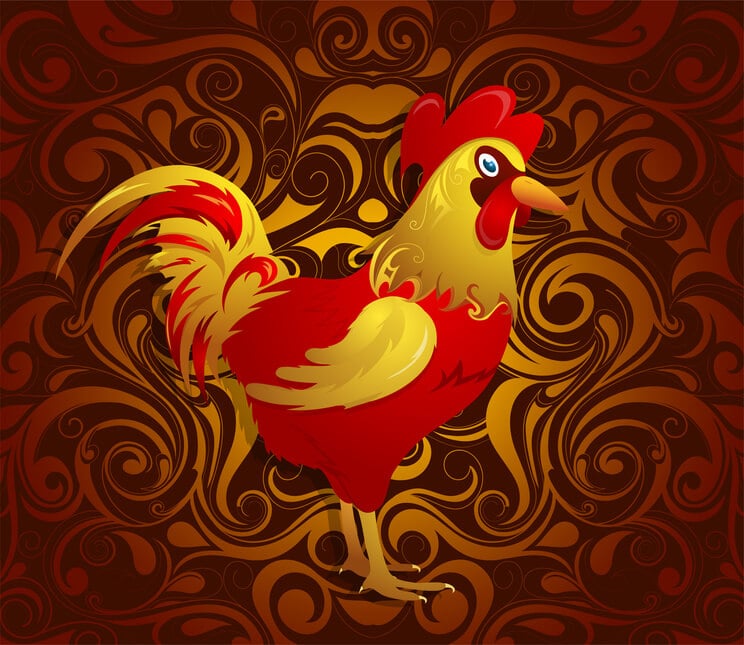 Roosters in Chinese astrology are born in 1933, 1945, 1957, 1969, 1981, 1993, 2005, and 2017. They are represented by the earthly branch of You and occupy an hourly interval between 5 p.m. and 7 p.m. Rooster Zodiac sign carries yin energy and is the tenth animal of the Chinese Zodiac signs. Like their animal sign, people of rooster are punctual and organized. In everyday life, roosters know how to have fun, like being honest, independent and enthusiastic, and make for great company when they do not fall prey to their arrogance.

All Chinese Zodiac signs have colors, number, flowers and directions which are lucky for them in any year. If you were born under rooster zodiac sign, pay attention to these symbols to find your luck:

These are the unlucky signs that everyone born in the year of the rooster should avoid:

With the ability to pay attention to details, roosters can understand people and trends, and therefore it seems that they can perceive the future when analyzing the present tendencies. Their ability to understand the world better than the average person can make them communicative, generous, kind, and attentive to other people’s needs. On the other hand, if people of rooster sign in Chinese Zodiac have decided that the worst of humanity weights more on the scale of things, it can make them cold, arrogant and disrespectful with those who do not seem to belong to the same social status.

The theory of five elements, namely wood, fire, earth, metal, and water, is an ancient theory in the Chinese Zodiac calendar. According to this theory, each of Chinese Zodiac signs carries an elemental attribute, which repeats in the same sign every 60 years. In Chinese astrology, knowing one’s elemental sign in relation to one’s animal sign helps to make predictions about a person’s destiny. Below, find the predictions about rooster personality for each of the corresponding elemental signs.

Born in 1945 and 2005, a wood rooster in Chinese Zodiac is independent and sentimental. These people like solving problems on their own as they believe their ways to be better than others’. These roosters are intelligent and sociable, but get easily bored with the everyday routine.

The years of birth of fire rooster include 1957 and 2017. They are smart, classy, intelligent, trustworthy, and with strong leadership skills. Cunning and passionate in life, they find it easy to get what they want, but also fall short of patience and become easily bored at work.

Born in 1969, earth roosters are active, perceptive, sociable, and hard-working among other Chinese Zodiac signs. Their values revolve around truth and love, and they develop great perseverance in their quest for significant other, success, and knowledge. Although noble in their judgment, they can become proud and often find it difficult to accept other people’s opinions.

Metal roosters in Chinese Zodiac calendar were born in 1981 and are best characterized by being trustworthy, optimistic, idealistic and at the same time practical. They will persevere in doing their best in the workplace. In some cases, they come across as arrogant and stubborn.

Water roosters in Chinese astrology are born in 1933 and 1993. People under this sign are smart, agile and sensitive. They are patient and kind-hearted, but they also tend to speak their mind regardless of who they might offend, which is a habit that makes them unpopular with coworkers and friends.

Usually, roosters are people with great health, vitality and strength. They like practicing sports and challenging themselves, which helps their body recover fast and fight illness. At times, they can be moody and stressed because of being sensitive, but their favorite physical activities always help them feel better and stay on top of things. Being active and motivated, as well as mastering their routine, will keep people born under rooster away from medicine for most of their lives.

Business and Career for Roosters in Chinese Astrology

Energy, talent and courage are the traits that keep people of rooster among the top employees of their companies. They can deal with any kind of problem their job or business stumbles upon and show persistence toward achieving their goals. They are indifferent toward money and do not set financial success as a priority at their workplace. In Chinese astrology, roosters are sociable people and their strong communicative skills make them suitable for working in teams or partnerships.

Such individuals are great performers and enjoy being at the center of attention, so careers in music or art will be suitable for them. They have a heightened sense of style and fashion and great taste in clothes. Moreover, they are knowledgeable about many topics and can carry conversations with people who belong to different social status and class than them.

Roosters’ Relationships with Other Signs of Chinese Zodiac

Concepts such as loyalty and sincerity are most defining to a relationship with roosters in Chinese astrology. They are sensitive, caring, and stand by their word seeking to create real, meaningful relationships with those around them. Sometimes they can brag about themselves, which can take away some of their charm, but once they learn to keep it under control, they can become friends with everyone and keep friendships over long periods of time. When matching with oxen and snakes, this sign can enjoy long peaceful, happy lives. The worst compatibility for rooster is with rats, rabbits, roosters, dogs, and horses.