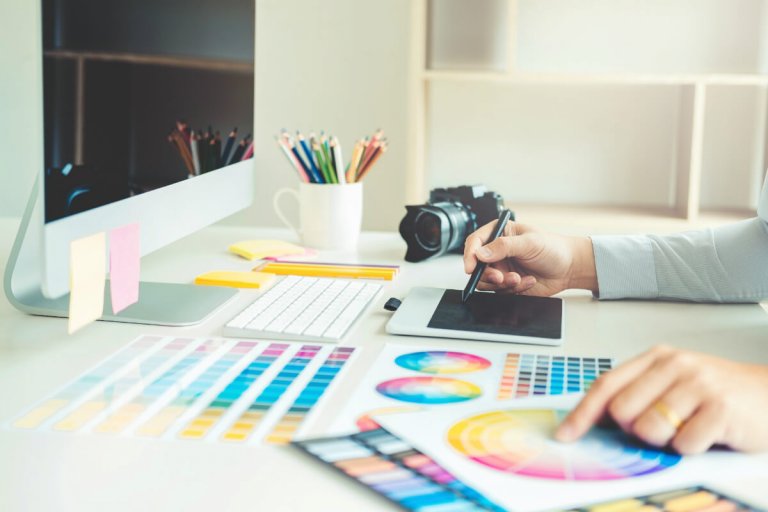 Arguably, the most popular deck available is the Rider-Waite Tarot, illustrated by Pamela Coleman Smith and developed by A. E. Waite.  It was first published in 1910 and has been the inspiration for thousands of decks since then. Like many tarot enthusiasts, and eventual tarot reading professionals, I felt inspired to create a deck of my own.

With the brilliant help of photographer and graphic artist Sasha Campbell, we successfully completed a tarot deck, found a printer, and produced 500 copies of the final product.  While we have not found a publisher, we are both very proud of the accomplishment and this article will share what we put into creating the deck.

I bought my first tarot deck in 1989 in Greensboro, North Carolina at a mall bookstore called Waldenbooks; I was 21 years old.  The deck I bought was the Mythic Tarot, authored by Juliet Sharman-Burke and Liz Greene and illustrated by Tricia Newell.  The deck used Greek Mythology as the thematic source for the artwork and mirrored some of the designs and layouts of the images of the Rider-Waite Tarot.

As my interest in tarot cards increased over the years after I bought my first deck, studied it, and worked with it, I began purchasing other decks that caught my eye (literally, the artwork jumped out at me)  or captured my interest (a theme or philosophy in the title or in a review).  While quite a few decks existed in the late 1980s and early 1990s, they were not easy to come by in my part of the country, the southern of the United States.

However, it did not take long for tarot decks, like other media, to start to explode with the spread and expansion of the internet and online shopping, especially after the founding of eBay in 1995.  By that time, I was deep into my PhD program, a serious amateur photographer, and getting paid to do tarot readings for people who found out that I read cards.

During that period of my life, I became inspired to want to photograph and create my own tarot deck.  I loved and practiced black and white photography and thought a black and white photographic tarot deck would be something new and different among decks.  I started working on the project and completed about 10 cards before the project got lost in the larger shifts in my life (marriage and a full-time career in academics).

The inspiration was there, but the dedication died fairly early into the process.  What I did learn from my foray into trying to create a deck was the dedication it would take to actually create 78 individual cards, even if they were based on already existing tropes and archetypes.  The project did not die, but it did go dormant until 2010.

In 2010 I was running a science fiction and fantasy book meetup; it was a small group of five and we would select a novel to read each month and discuss when we would “meet up”.  In the group was a young woman, Sasha Campbell, who was in graduate school working on her graphic design degree.  As is common at the beginning of meetups, we shared details about our lives as a way to get to know each other.

I shared that I did astrology and read tarot cards; she shared that she did photography and was working on her graphic design degree.  At one early meeting of the group, I asked her if she would show me some of her photography and immediately asked if she would be interested in doing a tarot deck with me.  Once I saw her photographs and heard the excitement in her voice, I decided to reawaken my inspiration and pursue the development of the deck with her as the artist, both photographing the images and creating designs.

The Long Road to Completion when creating a tarot deck

It took us three years to complete the principal photography and write the material that would explain the meanings of the cards. What made the process so enjoyable was Sasha’s ability to listen to my description of the concept for the card and find a way to create a photo that would brilliantly capture the idea.  I chose to make some pretty significant deviations from the traditional meanings of the cards, choosing to keep the structure, but make a deck that was more consciously designed for spiritual work.

Take a look at the preparation, sampling, and organization of Sasha’s process.

The name we gave the deck is the Tarot of the Human Experience.  It is actually made up of 98 cards because I chose to create truly negative cards instead of supporting the idea of reversals, so 20 of the cards are negative interpretations of the 6th, 7th, 8th, 9th, and 10th cards of each suit. Sasha arranged photo shoots with eager clients and fellow students, from who we collected release forms for each shot we chose for the deck.  She shot hundreds of photos that gave us the final 98 cards.

She also did the design work for the graphics that frame each card; I eschewed the traditional court cards and common icons for new symbols that would represent the elements outside of traditional western historical culture.  You can see a card from each of the suits and one of the court cards below:

Every detail was thoughtfully developed until we had a complete deck of cards.  What you can see in the cards represented is the upside-down key symbol representing a negative card, with an element design inside the circle part of the key.  The court card is a mix of elements, in this case, the element of earth as it “goes into” and works with the element of water.  The water to earth card is below:

A Labor of Love, Labor, and Expensive

The final “chapter” in the creative process was producing an actual deck we could hold in our hands and use.  Unfortunately, we could not find a publisher, but fortunately, in our modern era of self-publishing, with the right information, you can bring your creation to life professionally if you can afford the cost.  With research and guidance from another creator/artist who used a printing company in China, I was able to get the card decks printed locally and the books and boxes for the cards printed and sent from China.

I did have to work with a contact in China, pay a shipping and dock fee, and arrange to pick up a pallet of boxes and books from the shipping company headquarters to avoid an additional, significant delivery fee if I wanted them at my doorstep.  The process certainly helped me appreciate the logistics and work involved in getting something created and into a final product that people can use and feel good about purchasing.  Below is a promotional photo of the deck.

If you are curious to know more about the deck, please visit my site and check out the page we created.