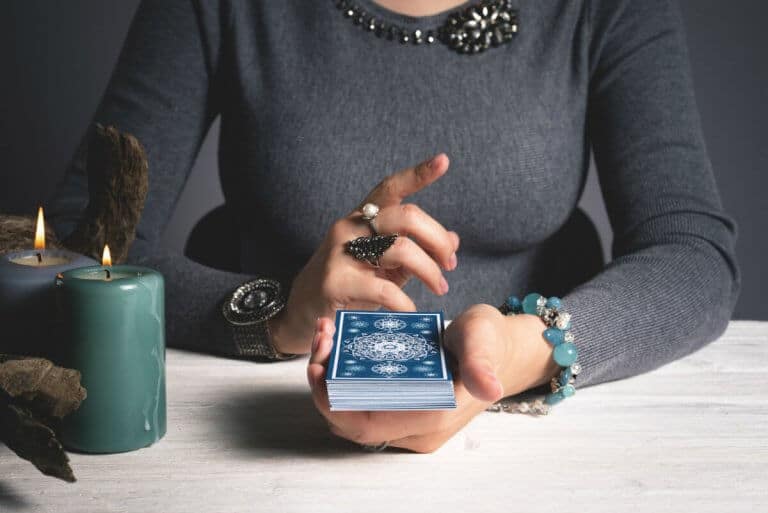 Once shrouded in mystery and a “tool of people with questionable character, dark intentions, or acolytes of heathen beliefs”, tarot and oracle cards are enjoying widespread, if still hesitant acceptance.  In this article, I want to share my suggestions on how to pick a tarot deck to learn tarot reading for yourself.

As a professional tarot and oracle card reader who reads in public regularly, people interested in a reading or just curious about the process will often come up to me or sit down across from me and say and ask the following, “I am interested in learning tarot, but have been told that you are supposed to wait for someone to give you a deck before you can study the cards, is that true?” My answer is always, “no, that is not true”.

If you want to learn tarot, then you should buy your own deck and choose a deck you want to learn. There are thousands of decks available.  Unfortunately, many people, starting out, whether they were given a deck or bought a deck, usually get the Rider-Waite Tarot which is an especially complex deck requiring years of study, not only of the deck, but the historical period it represents (14th to 15th century Europe) and in which it was created (early 20th century United States).

The comment I hear all too often is, “I wanted to learn tarot, but the deck I got just made it impossible”. And I will ask, “did you get a Rider-Waite deck?” “Yes! How did you know?!” Trying to learn tarot using the Rider-Waite Tarot is like trying to learn to drive for the first time in a commercial jet airplane (and yes, I mixed my metaphors on purpose!).

Select a Visually Accessible Deck (with Keywords as a Bonus)

Here is my recommendation: select a tarot deck that is visually accessible.  If it has keywords on the cards, even better.  The deck may not be the final deck you work with it, but it will be a much better starter deck if you can look at the card and glean the meaning visually, right off the bat.

Below are some sample cards from some visually accessible decks I recommend to clients who want to study the tarot with me or want to try to learn on their own.  Some align with “classical” tarot concepts and others keep the tarot card structure (78 cards, 4 suits, 22 major arcana cards), but modernize the imagery and concepts. Let’s look at one of each that has both visual accessibility and keywords.

The Wildwood Tarot is a Celtic, earth-based (Druidic) style tarot that makes an excellent starter deck as well as a professional-use deck.  I have about 25 decks I use in regular rotation with clients at my home office and about 10 I rotate and use in public.  This deck is one of the 10 in my public rotation and one of the 25 clients can choose in my home office.  Take a look at the cards:

As you can see, each card from the 4 suits has a keyword associated with that card.  Also, in keeping with the Druidic/Celtic/Earth theme, the traditional items representing the suits (cups, swords, wands, and pentacles) have been replaced with vessels, arrows, bows, and stones.  The major cards have also been renamed.  In the example above, the Journey is more commonly known in traditional decks as Death.

The Osho Zen Tarot is probably my favorite “starter” deck because the imagery is about as visually accessible as one can make concepts, and it has the keywords on the cards as well.  Based on the eastern life philosophy of Zen Buddhism, this deck is one you can basically pick up and start reading with almost instantly.  Below are some samples of the cards:

In this deck there are no symbols for the suits; instead, the essential element is presented by a color scheme.  The 4 in the gray diamond is the four of air, the one in the red diamond is the 6 of fire.  Instead of the king, queen, knight, and page, the Osho Zen deck uses direction, so the queen of pentacles becomes Rainbows to the South (why rainbows for earth rather than green or brown is something of a mystery to me).  The major arcana cards are distinguished by a purple diamond and Roman (rather than ordinal) numbers.

Two fine examples of classical imagery reimagined with more modern and, in one case, playful design, are the Gilded Tarot and the Happy Tarot.

The Gilded Tarot is a beautifully rendered tarot deck with vibrant color and a clear nod to the designs found in the Rider-Waite Tarot.  Less accessible visually and concept-wise than the two decks above, but still more inviting to the modern artistic sensibilities, the Gilded Tarot is a fine deck to study and learn tarot with, as a bonus it comes with a very nice companion book.

This deck uses all the traditional icons and concepts, but modernizes them through dynamic fantasy-style artwork enhanced by computer “magic”.  If you look at the cards from the two decks above, you will see how different the same card is from one deck to the other.

I will admit that I bought this deck as a giveaway for a presentation I do at an event twice a year in Raleigh, NC.  In the presentation, I have attendees draw two cards, which I will interpret for them while talking about the tarot.  They get to keep the cards.  As I was going through the deck before my presentation, I realized the deck was ideal for public readings.  Fun, but not frivolous, though it appears that way from the artwork, this deck is as good as any for profound work with a client.

Pick a Deck that “Catches” YOUR Eye!

Learning almost anything is driven by interest.  If your interest is high, your chances of learning are much greater than if it is low and you have to “force” yourself to be interested. If you have an interest in dragons, fairies, vampires, Greek mythology, Egyptian mythology, anime, superheroes, video games, Native American spirituality, animals, steampunk, or any number of artistic styles, then there is a deck out there for you!

Waning Gibbous Moon
The moon is currently in Virgo
We use cookies to give you the best experience. Continuing using this site we assume that you are happy with it.Ok