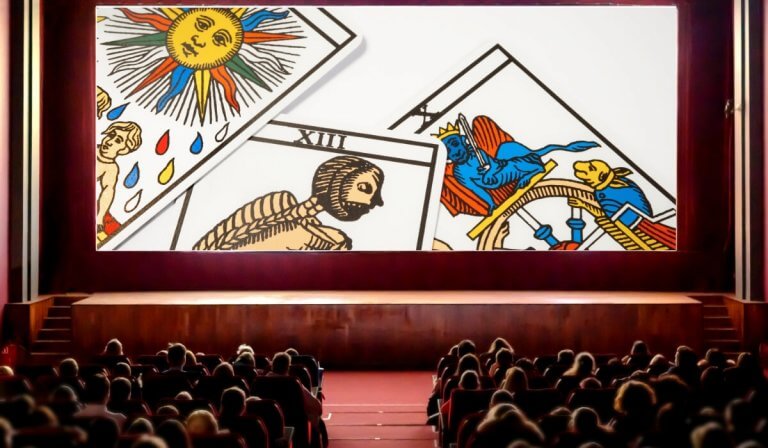 Once shrouded in mystery and a “tool of people with questionable character, dark intentions, or acolytes of heathen beliefs”, tarot and oracle cards are enjoying widespread, if still hesitant acceptance.  In this article, I want to look at examples of tarot decks in the popular culture through films and tv.

One of the first, if not the first, movie appearances is the 1947 film noir movie, Nightmare Alley.  The film stars Tyrone Power and Joan Blondell, who plays the tarot reader Zeena.  In the 1958 Orson Wells movie, Touch of Evil, Marlene Dietrich plays the fortune teller Tanya, who predicts the demise of the lead character.  The most famous and best-known Tarot card appearance occurred in the 1973 James Bond film, Live and Let Die, where Jane Seymour plays the role of Solitaire.

In many of the film appearances the most commonly used cards are Death, the Tower, the Devil, the Wheel of Fortune, and the Lovers, creating and feeding into the idea that Tarot cards predict your fate, which for the sake of dramatic storytelling will involve a character’s death, tragic accident, selfish behavior, or unavoidable but inappropriate love affair.  None of these early uses did anything to dispel the “evil” nature of the cards themselves.

The earliest TV appearances show up in the 1960s and in some rather odd places, one might think.  In a 1961 episode of Lawman (Season 4, Episode 13), a western TV series, the actual episode is entitled “Tarot”.  Even more surprising, the reader is a man, Joe Wyatt, when the vast majority of the readers are nearly always actresses.

Less unusual was the use of Tarot cards in the 1960’s TV show Dark Shadows, which tells the story of family patriarch Barnabas Collins, who happens to be a vampire.  Tarot cards appear in several episodes, well in line with the horror/fantasy nature of the show, which would obviously include occult tools and references.  For a wonderfully comprehensive list of movies and TV shows, I recommend visiting Mary Greer’s page published in 2008.

Several non-mainstream movies have been made with a Tarot card title, Tarot deck plot inclusion, or overall Tarot theme (such as the 2015 movie entitled … Tarot).  Perhaps the closest to mainstream option would be Woody Allen’s Scoop (2006), starring Scarlett Johansson and Hugh Jackman.  Once again Tarot cards get connected to something “bad” since the villain of the story is the Tarot Card Killer, a murderer who leaves Tarot cards on his prostitute victims (Tarot card/serial killer/prostitute).

Popular culture storytelling continues to play up the “wow, these cards are really scary!” themes that give tarot cards a nasty reputation to people who might actually benefit from a positive, professional reading. The Knight of Cups movie is far more interesting, using Tarot card concepts to delineate different characters in the film.

Perhaps the most intense use of Tarot cards in a recent television series would be the ones that appear in Penny Dreadful (which ran from 2014 to 2016), starring Eva Green as clairvoyant Vanessa Ives, who reads Tarot cards for other characters in the story.   She uses a deck specifically created for the show, which can be purchased on Amazon.

The most commonly used Tarot deck in film and television is the Rider-Waite Tarot, but other decks do make the list. The Thoth Tarot by Aleister Crowley appeared in enough popular culture references that Richard Kaczynski devoted a web page to all the appearances he could find, including not only film and television, but music (album covers) and comic books.

A number of movies and TV shows chose to create Tarot cards and decks for the film or series (some complete decks, some just the cards for the show).  Some decks have been created based on shows; most recently the Game of Thrones Tarot is now.

The cards that appear in the shows Penny Dreadful and Carnivale were created just for the shows and do not receive high marks as tarot decks.  The Penny Dreadful deck is available for purchase (not on Amazon, but eBay).  The Carnivale Tarot Deck is listed as a complete deck at Aeclectic Tarot, but neither Amazon nor eBay currently has a listing.

The Kind of Help Tarot Does Not Need

An oft used proverb, associated with P T Barnum and expressed in less direct terms by Oscar Wilde, is the saying, “there is no bad publicity”.  Well, actually, yes there is; and Tarot certainly ends up on the short end of the publicity stick in film and TV.  For every Knight of Cups movie that taps the intelligence and archetypes of the Tarot, there are hundreds of “the card predicts the death of a character, the misfortune of the character, the bad behavior of the character, or the debauchery of the character” examples.

I have actually had lay people tell me I am doing Tarot “wrong” based on a film or TV representation that lasted no more than 5 minutes or shows absolutely no effort to understand how Tarot works.  They are, basically, props to move the plot along, usually in some negative or tension building way.  But never as a tool that can actually help soothe someone or help a person solve a problem in a positive way.  As a clever t-shirt says, “Please do not confuse your Google search with my medical degree!”

It may be fun, interesting, or frightening to see Tarot cards in a film or TV show, but please do not let that be your only exposure to Tarot cards and what a rich and powerful tool they actually are or can be in your life.