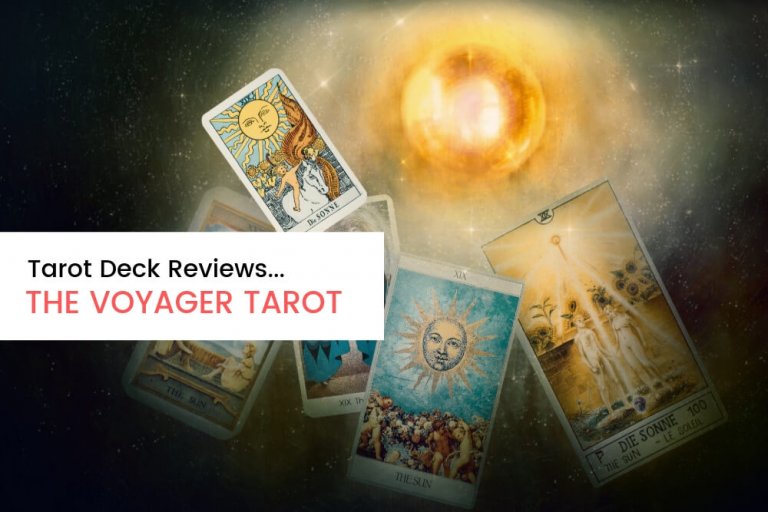 Are you looking for a unique tarot experience? Voyager is probably for you.

The first two tarot decks I ever got were the Rider-Waite and Thoth. For a few months, I learned and used these two landmark decks exclusively. Eventually, however, I became ready to discover something new.

The third tarot deck I ever got was the Voyager, co-created by James Wanless and Ken Knutson. I first saw it at a local bookstore and was immediately drawn in by the picture on the box. The card known as “Time-Space” was so incredibly different from the two decks I’d been working with. I followed my intuition and decided to purchase the Voyager. I had no idea what to expect, and what I soon discovered was something unlike any I’ve seen, before or since that day.

The Voyager is unlike other tarot decks in a few remarkable ways. Firstly, it avoids the usual medieval imagery that you see on most traditional decks. You won’t find pictures of kings and queens on thrones, knights on horses, and other motifs from Marseille or Rider-Waite-influenced decks. This is a breath of fresh air for those who struggle to connect to the pictures on what is considered “normal” tarot. Tarot arose during the European Renaissance, and the images we see in traditional decks reflect that era. 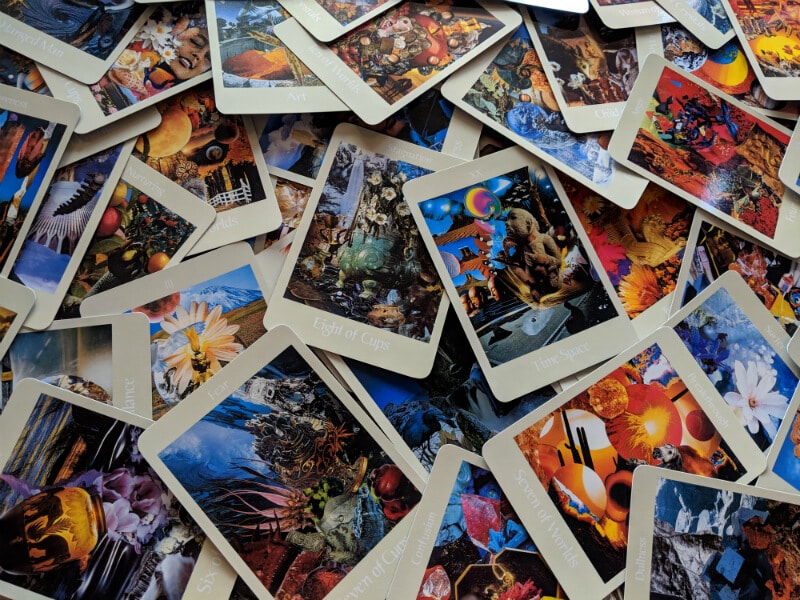 It’s important to understand that tarot is a system of universal symbolic images. It is a deck of cards that represents life itself. Tarot is not intrinsic to the Renaissance or the imagery we see on traditional decks. Tarot is just as relevant today as it was then, and it’s just as useful in Asia or Africa as in Europe. While traditional decks don’t adequately reflect the universal nature of tarot, Voyager does.

Some people can relate to the imagery on Marseille or Rider-Waite-style decks, but others struggle. A modern deck such as Voyager revives tarot’s themes for a contemporary worldview and makes it universal. This deck utilizes images from all over the world and from different eras. Asian, African, and Native American cultures are represented. Wildlife and majestic scenes from nature are explored. There are images from antiquity along with modern themes like big cities, scientific discovery, and space exploration. The modernization of the tarot tradition is Voyager’s single-greatest asset.

As you initially flip through the Voyager deck, it immediately becomes obvious that this is not typical tarot. The style is unlike any you’ve seen before. Each card is comprised of a visually-striking photo collage containing many symbolic images. All the images within the card, taken together, capture the spirit of that card.

Reading with Voyager effectively means navigating these photo collages. For each card, your eyes will always pick out one or two images to focus on initially. As you gaze at the card longer you will notice more subtle aspects. These slighter pictures can be used to broaden and deepen your understanding of the card and enrich the reading. It is a wonderful benefit to have so much to draw on for intuitive insight.

On the other hand, it can be overwhelming trying to take it all in. I suggest not trying to do too much too fast. Focus first on what your eyes pick up on initially. These first impressions may be all you need to get the intuitive message from the card, without having to study the entire collage in detail. A thorough scan of the card is optional, depending on how much time you want to devote to your reading and how insightful your initial impression of the card was.

Some may find a thorough study of each card to be helpful in gaining greater understanding, but others may find it’s too much work. When I use the Voyager deck, my method of reading depends on what feels right at the time. Often a quick first impression is enough. When it isn’t, however, I find a detailed examination of the card brings intuitive wisdom and depth.

The Voyager deck contains the traditional 78-card structure. There are the usual 22 cards of the major arcana, 40 minor arcana cards of Ace through 10 in four suits, and a set of 16 people cards, traditionally known as court cards.

The major arcana are essentially the same as you would find with traditional decks. These cards represent the primary archetypes of the experience of life. Here you’ll find the Magician, Empress, Wheel of Fortune, the Tower, and the rest. The Voyager diverts a little in some of the names of these cards, but the themes remain essentially true to other decks. For example, the Fool is changed to the Fool-Child; Justice is now Balance; Temperance is called Art, and Judgement is changed to Time-Space. (This card still blows me away.) The changes made to these cards nicely modernize the themes without straying from what makes the major arcana so effective to work with. The images are striking and unforgettable. 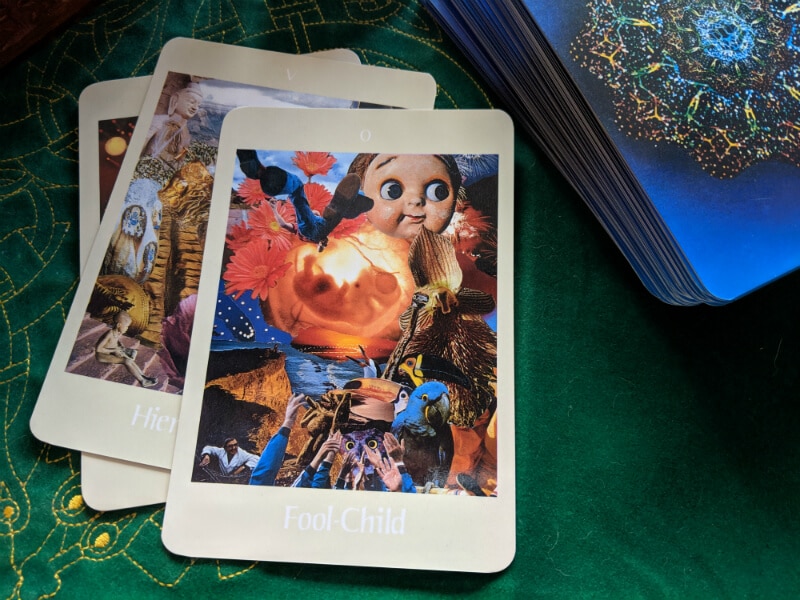 The minor arcana contain the usual 10 cards of 4 suits equaling 40 total. The names of the suits divert somewhat from the traditional; Wands and Cups are familiar, but Crystals have replaced Swords as representative of element Air, and Worlds have replaced Pentacles/Disks/Coins for element Earth.

The meanings of some of the minor arcana are noticeably different from the traditional tarot. These changes are made more apparent by a single keyword on each card. For example, most experienced users don’t associate the 4 of Cups with “Anger”, the 6 of Cups with “Sorrow”, or the 6 of Swords (here Crystals) as “Confusion”. Tarot newcomers aren’t likely to even notice these changes, but seasoned practitioners will have to adjust to them. My suggestion for the experienced is to relinquish your usual interpretations when using this deck. Voyager’s uniqueness is its greatest asset, but only if you’re willing to go along fully for the ride.

In place of the customary court cards, Voyager contains 16 family cards. Instead of the usual King, Queen, Knight, and Page, we get a Sage, Father, Mother, and Child of each suit. The Father is akin to the King and the Mother is like the traditional Queen. But with the Sage, we see an elder of each suit, representing the wisdom that comes from age and experience. With the Child, we get the young energy of the suit in a playful and relatable manner. With these two new dynamics, the user of Voyager is encouraged to examine and engage with the wise older person and carefree youth within. I find these family cards to be one of the most innovative aspects of Voyager. They make this deck far more approachable than traditional court cards.

The Voyager deck is an excellent starting point for a tarot beginner who does not feel drawn to medieval imagery on traditional decks. It’s also an effective vehicle for the experienced practitioner who wants to broaden and modernize their understanding of the tarot archetypes. The deck has been around since the 1980s yet feels like a breath of fresh air to this day.

The big positives of Voyager include its global and modern palette and its distinct photo-collage style. The images are extraordinary and often stunning. Also, the family cards are an innovative change from traditional court cards. The booklet that comes in the pack is very good. I do recommend, however, buying the companion book as well. Voyager Tarot: Way of the Great Oracle, by the deck’s co-creator James Wanless, is extremely insightful.

The downsides of this deck are likely to be felt most by rigid traditionalists. The meanings of some of the minor arcana are very different and the entire structure of the court cards have changed. Frankly, I have mixed feelings with the use of a single keyword for each card of the minors and family cards. Sometimes they narrow my appreciation of a card a bit too much, but they also provide an effective launching pad for my intuition to work with. It’s a double-edged sword, so to speak. Or perhaps a double-edged crystal?

Since purchasing the Voyager, I’ve met James Wanless and consider him a great friend and mentor. I’ve attended some of his tarot workshops and had private readings done by him. He’s one of the warmest, most honest and insightful people I’ve ever known. Plus, his deck is awesome.

I highly recommend Voyager Tarot to anyone who is ready for a stunning deck that modernizes the tarot tradition. It is artistic, modern, and universal for anyone.

I love tarot and assisting others to awaken to the source of truth, wisdom, and love within themselves. My book is for those on the awakening journey and is titled Rise & Shine: A Guide for Experiencing Your Midlife Awakening. My blog and details about my coaching services can be found at www.tarotawakenings.com. Frank Kwiatkowski Website | Facebook