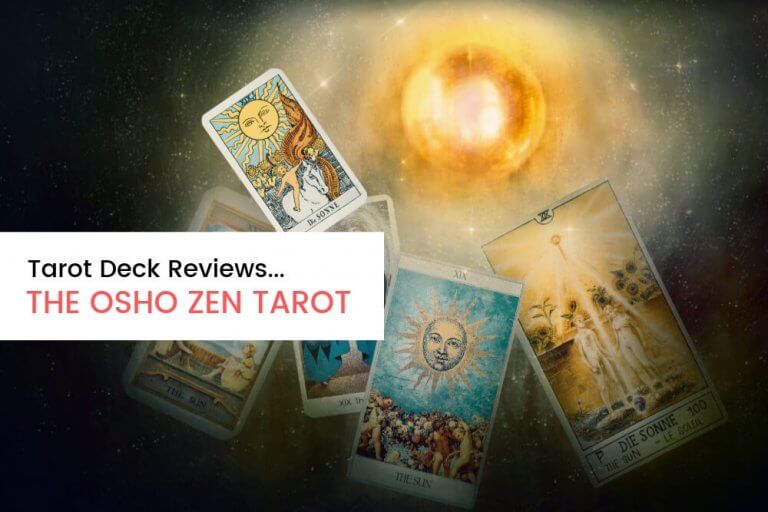 Tarot and Oracle Decks have exploded into the common experience since the 1990s. Today there are literally thousands of decks to choose from, including out-of-print decks and published ones. Reviewing anything involves subjective judgment based on various criteria: quality and size of the cards, visual accessibility of the art, quality of the companion text of the deck, and potential usefulness in professional practice. This month I have chosen to use the Osho Zen Tarot Deck (ISBN-13: 978-0312117337).

The Osho Zen Tarot was published in 1995 by St. Martin’s Press and is one of the earliest decks I purchased.  The deck actually has 79 cards instead of just 78.  The additional card is one of the Majors, the cards with a purple background in the diamond and Roman numerals. The extra card is entitled the Master and actually does not have a number.  Along with the deck, there is a 192-page book explaining the meanings and interpretation of the cards.

Based on the philosophy of Zen Buddhism, this deck breaks with the traditional symbols for the Minor Arcana suits (cups, swords, pentacles, and wands) and replaces them with their fundamental elements (water, air, earth, and fire).  The court cards (Page, Knight, Queen, and King) are replaced with directions (West, East, South, and North).  The Major Arcana are renamed to reflect more obvious meanings, especially for many of the more esoteric cards in the Majors of a traditional deck (such that the Magician becomes Existence, the Chariot becomes Awareness, and the Sun becomes Innocence).  Thematically the cards reflect Zen concepts, including an appreciation for the NOW and the every day, while eschewing traditional patriarchy and western concepts and imagery.

The card stock is very good; not the best, but certainly not flimsy.  I have rather average to small hands (I cannot palm a basketball), so the size of a deck of cards matters when it comes to shuffling them, especially in front of clients.  This deck is larger than a deck of playing cards, but only slightly so, which makes them easy to handle and shuffle.  I purchased my first deck in 1996 and had to replace it in 2005 due to wear.  Now it must be said that I use a deck much more regularly than most people if I find it can be used with clients or out in public, so durability is an issue.

The Osho Zen Tarot is certainly a great deck for public and professional readings.  Reading in public needs to be handled thoughtfully because many people may be approaching me for a reading for the first time in their lives.  Most of those people do so with some potential trepidation or caution because they have heard that the tarot deck contains some pretty “scary” cards, like Death and the Devil.  In this deck Death is Transformation and the Devil is Conditioning, making both cards far less overwhelming to a new client.  In fact, this deck is my number one public readings tarot deck.

This deck is pretty much one of the gold standards for visual accessibility.  Not only does the deck have keywords, as you can see from some of the sample cards, but the artist has done a great job producing images that match the keyword of the card.  I am a rather big fan of artwork that really puts the meaning out for pretty much everyone to see.  The plant pushing up through the rock formation in Courage, which is the Strength card renamed, is a wonderful way to convey the concepts of strength and courage; as if to say, “nature finds a way” or “with just a little crack in the soil something alive will push forth”. 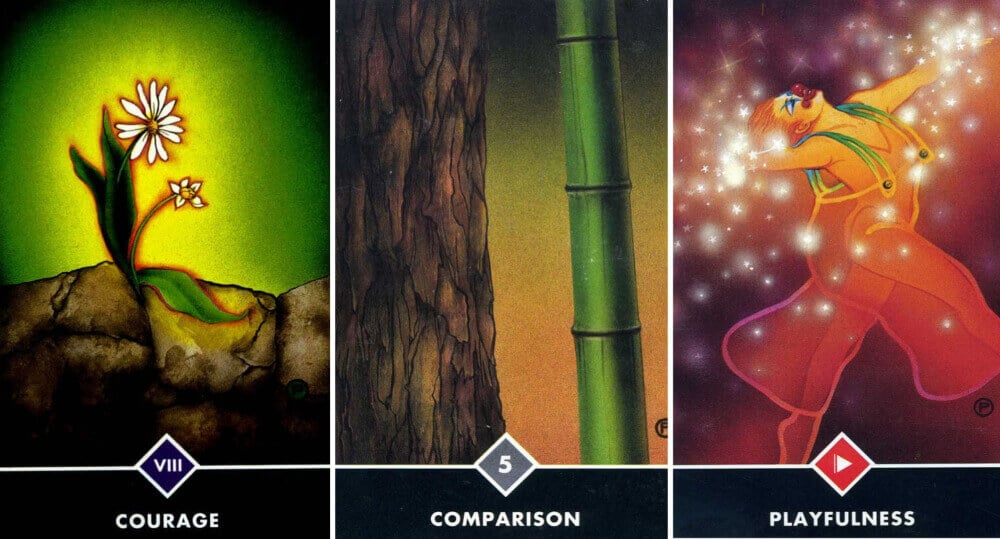 Some of my favorite cards include the 7 of Rainbows, Patience, which shows the phases of the Moon and a woman who is pregnant.  When this card comes up in a reading or is drawn for meditation, I tell clients or think, “you are in a situation you can neither rush nor slow down; it has its own pace and you must honor it.”  The 5 of Water, clinging to the Past, shows a figure with a box of swirling energy encasing the person’s head, and apt visual of being “boxed in” emotionally by past events or experiences we have not let go of, but desperately need to release.

This deck does come with a book, not merely a booklet (the small pamphlet you find in many of the US Games decks that are pretty much a box with a deck of cards in them).  Each card receives two pages of information.  One page, the left, has the image and the commentary about the card, while the other page, the right, has an interpretation and suggestions about how to understand the card.  For the Playfulness card, the first line of commentary is “Life is rarely as serious as we believe it to be, and when we recognize this fact, it responds by giving us more and more opportunities to play.” (54).  The first line of interpretation says, “The moment you start seeing life as a non-serious, a playfulness, all the burden on your heart disappears.” (55)

As a professional reader who started reading cards for pay in 1992, I can say that this deck has proven to be one of the most powerful and useful I have owned and worked with.  I sometimes refer to it as a “kinder and gentler” deck mainly because it does not have the “scary” cards.  But the truth, this deck is and can be just as transformative as any deck, even the solemn and weighty decks like the Rider-Waite or Thoth tarot cards.  In 2003 my partner and I were trying to decide if we should try to have a child.  We consulted this deck for insight about our intention.  We both drew three cards for three questions: 1) should we try to have a child as soon as possible? 2) should we wait 2 or 3 years? Or 3) should we not have a child?

Believe me when I say there are some hard, negative cards in this deck (no reversing the cards needed), and we each drew three of them a piece for that last question.  Clearly, we were being guided to answer question 1 or 2 with a “yes”.  The second question had a mixture of positive and challenging cards, leaning towards a positive outcome.  However, the cards drawn for the first question were all positive for both of us.  My partner went off birth control and she got pregnant the very first month off the birth control.  I was present at the birth of my daughter in January of 2005.

This deck could be the one deck you own if you only want to own one deck, but only if you are comfortable and even desire to be non-traditional in your approach to having a deck for personal or professional use.  Structurally, this is a tarot deck, and it does work with archetypes, but it pretty much tosses out the western tradition in favor of an eastern one.  If you plan to have multiple decks in your tarot/oracle deck collection, then this one is a must-have.  I currently have well over 70 decks, roughly 25 I use in rotation as a professional reader, and 5 are always within my reach when it comes to selecting a deck to read in public.  This deck is one of those 5.

The Different Habits of The Zodiac Signs