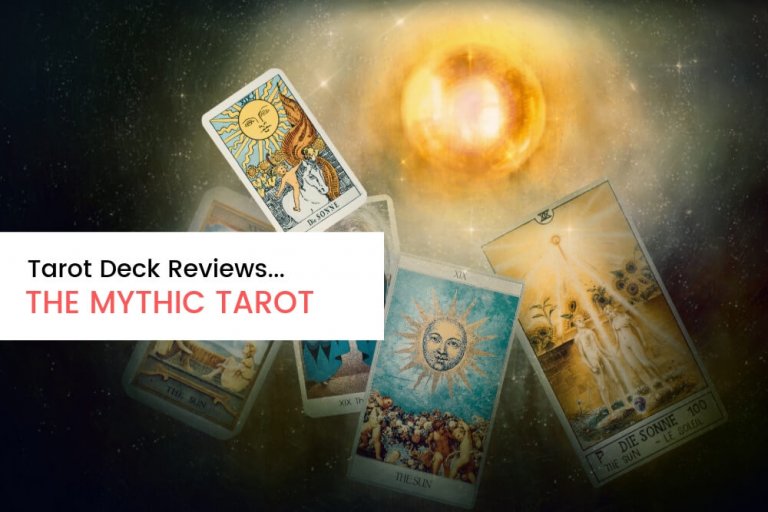 Tarot and Oracle Decks have exploded into the common experience since the 1990s. Today there are literally thousands of decks to choose from, including out-of-print decks and published ones. Reviewing anything involves subjective judgment based on various criteria: quality and size of the cards, visual accessibility of the art, quality of the companion text of the deck, and potential usefulness in professional practice. This month I have chosen to use the 1986 version of the Mythic Tarot Deck (ISBN-13: 978-0671618636). This version of the deck is out-of-print and will require going through an Amazon reseller, Ebay, or Alibris to find a copy.

The Mythic was published in 1986 by Fireside Press and is the very first deck I purchased. I bought this deck in the Waldenbooks bookstore at the Four Seasons Towne Center (shopping mall) in Greensboro, North Carolina in the summer of 1989. I had graduated from the University of North Carolina at Chapel Hill with my Bachelor of Arts in History (Ancient History, the Athenian Period). During the summer, and before starting my Masters in English at the University of North Carolina at Greensboro, I was working at Lowe’s Home Improvement and enjoying my time off from studies. I went to the mall to escape the North Carolina heat. While in the bookstore inside the mall, I stumbled upon two tarot decks, the Rider-Waite and the Mythic Tarot. Had I been a Renaissance history major, perhaps I would have bought the Rider-Waite, but it was pure synchronicity that there was a tarot deck based on Greek Mythology and I happened to be an Ancient Greek History scholar.

Based on Greek Mythology, this deck follows the traditional symbols for the minor arcana (cups, swords, pentacles, and wands) and names for the major arcana (Magician, Hierophant, and so on). What makes this deck interesting is the use of four mythical stories to highlight the journey through each suit: Jason and the Argonauts for the Wands, Eros, and Psyche for the Cups, Orestes for the Swords, and Daedalus for the Pentacles. The majors are made up mostly of the Greek Pantheon (Hermes for the Magician and Demeter for the Empress) or a major myth (such as Pandora opening the box of ills for the Star and the punishment of Prometheus for the Hanged Man). This 1986 version of the deck came with a workbook, another differentiating feature that, sadly, was not reused with the updated 2011 version currently now in print. For a beginning tarot enthusiast, this workbook was a masterstroke by the authors: Juliet Sharman-Burke (Author) and Tricia Newell (Illustrator). If you decide to track down a copy of this deck, be sure to also get a workbook.

The card stock is good; not very thick, which makes shuffling easier. I have rather average to small hands (I cannot palm a basketball), so the size of a deck of cards matters when it comes to shuffling them, especially in front of clients. This deck is larger than a deck of playing cards, and more rectangular than square, but still very easy for me to shuffle. I purchased my first deck in 1986 and still have it and will use it with private clients from time-to-time. With a high level of constant use, these cards would need to be replaced over time.

The Mythic Tarot is certainly a solid deck for professional readings, but not the best deck for public events. Reading in public needs to be handled thoughtfully because many people may be approaching me for a reading for the first time in their lives. Most of those people do so with some potential trepidation or caution because they have heard that the tarot deck contains some pretty “scary” cards, like Death and the Devil, which this deck contains (Death is Hades and the Devil is Pan). Also, the stories that make up the journey through the suits have some pretty difficult images and messages from the stories. The 3 of Swords shows two figures running a third person through with swords while he is bathing (Agamemnon is the one being killed and not his wife, Clytemnestra, and her lover murdering him). In the 5 of Swords Orestes is shown being driven mad by the Furies. Drawing these cards will put the most seasoned client on edge while working to process the meaning of their reading.

This deck is something of a mix when it comes to visual accessibility. There are no keywords on the card expressing the meaning of the card, which can be found on the deck previously reviewed (the Osho Zen Tarot) and most oracle decks. Some tarot decks put a keyword at the bottom of the card, but most do not. If you know nothing about Greek mythology or the stories used for each suit, the cards will be far less accessible visually than if you do, of course. But even so, many of the card images “make” the meaning pretty clear, like the 3 of Swords that shows a figure getting stabbed with swords by two other figures. The 6 of Wands shows a figure holding a pelt above his head while those around him cheer or applaud his success, so you can make a good guess that this card is about some kind of victory or accomplishment. 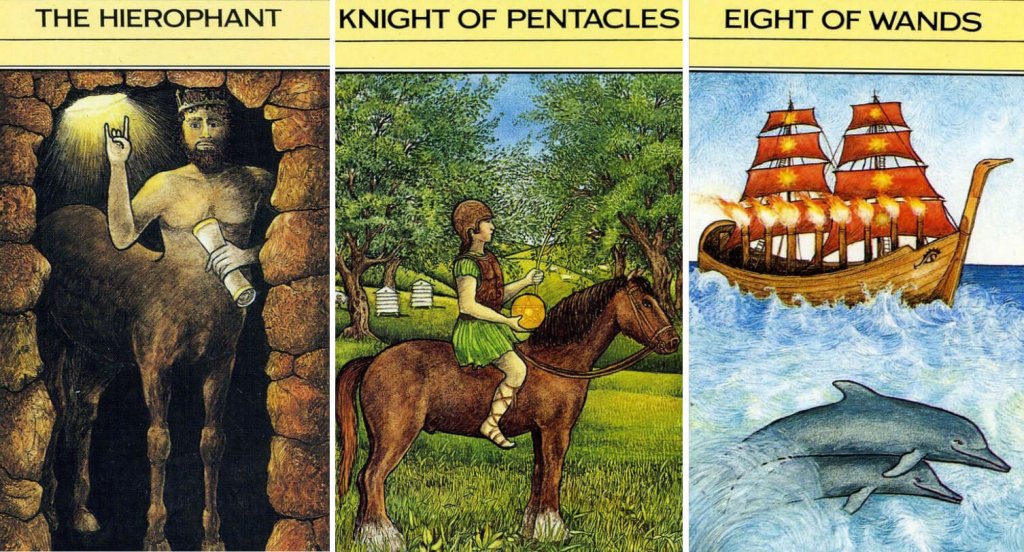 This version of the deck (1986) comes with a workbook, which is, honestly, outstanding! The workbook is the crown jewel of this set of cards. The first part of the workbook is dedicated to the major arcana. The left-hand page is an explanation of the card, with the mythological reference and divinatory meaning directly below the name of the card. The Chariot portrays Ares riding in a chariot being pulled by one black horse and one white horse. The divinatory meaning is: “conflict within, struggles and battles, but potential for victory, resolution of quarrels.” (24). On the right-hand page is a depiction of the card without any color. You are encouraged to engage in a guided fantasy about the card and to color it in with your own choice of colors (literally the 22 major cards are coloring book drawings of the artist work). Below the image, for you to color is a note space of 10 lines for you to write your notes and observations about the card.

The court cards (Knight, Queen, and King) are presented in small images in the write up about the card on the left-hand page. On the right-hand page, there are a series of questions for you to answer by writing in the workbook. Each of these cards is associated with a sign of the Zodiac, so the Knight of Cups is Pisces. The workbook page begins by having you record the date, then list your Sun sign, then answer the first question, which is: “Describe the characteristics of anyone you know born under Pisces:”. The Pages are described on two pages (58-59), with no page for note taking or questions to answer. The cards in each suit, beginning with the Ace and ending with the 10, have a single page given to them. Half of the page (the top) is the explanation of the card, the lower half is a space for notes with a line for the date and then the following directions, “Recall an experience of your own which fits this image’s essence:”.

In a word … BRILLIANT!

As a professional reader who started reading cards for pay in 1992, I can say that this deck very good for the right client. I have found that most people resonate with certain cultures, even if they are not necessarily from that culture. I found my love of Greek mythology very early in life, around 12, so this deck was very easy for me to understand and use personally. Professionally, this deck can be quite esoteric for someone not familiar with the stories and gods/goddesses of ancient Greece. But even so, the artwork still does a good job communicating the essential meaning even if you do not grasp the finer details. The Star shows a woman looking at a shining being while dark matter and ugly images flow out of the box in front of her. Even if you do not know the story of Pandora, from the art alone, you can “see” that the figure is focusing on what is beautiful within the ugliness, seeing hope in the face of obstacles.

A very high rating of this deck would certainly reflect some of my personal bias, but really, it is not for everyone. It is a valuable deck if you are a collector because it is certainly one of the first decks to make it into the mainstream and share shelf space with the Rider-Waite Tarot; new copies of the deck and workbook together can prove quite expensive). What does get the highest rating is the workbook, which is invaluable and can be used as a model for any deck you would choose to purchase (and you can purchase the book independently through resellers, at rather low prices). I currently have well over 70 decks, roughly 25 I use in rotation as a professional reader, and 5 are always within my reach when it comes to selecting a deck to read in public. This deck is not one of my public go-to decks, but it is in my 25-deck home office rotation.