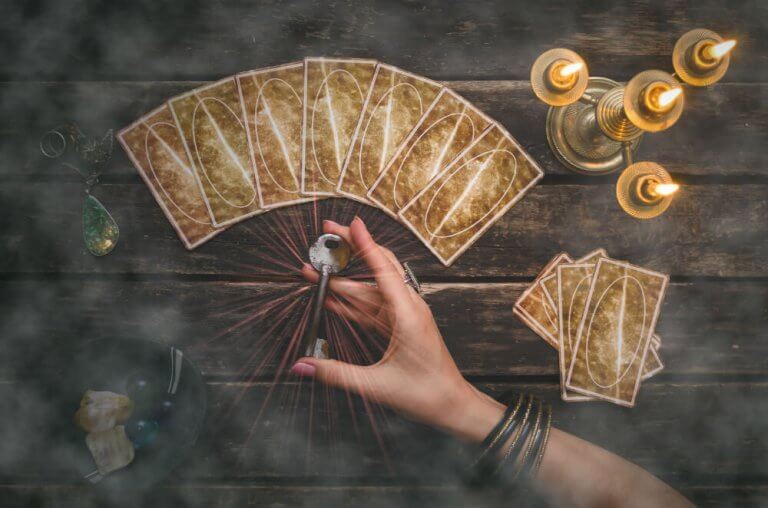 Your spiritual and purposeful well-being matter, in your relationships, career, and personal self-development. In our current age, we can easily get lost in the chaos and demands of our daily lives and the tempests of the world around us. Sometimes we feel stagnant and know we need to find a way to get “unstuck”. Whether you are in a crisis, feeling lost, or need to make a conscious change out of old, frustrating patterns, a tool like a tarot or oracle deck can help. How do you find the right deck for you?

When I purchased my first tarot deck back in 1989, I was in a Waldenbooks store in Greensboro, North Carolina. Waldenbooks was a subsidiary of Borders bookstore, which was a competitor of Barnes & Noble. Waldenbooks were located in shopping centers, rather than stand-alone like Borders and Barnes & Noble. At the time of purchase, in the summer of 1989, after graduating with my undergraduate from the University of North Carolina at Chapel Hill and starting my Masters in English at the University of North Carolina at Greensboro, there were only two tarot decks in the store – the Rider-Waite and the Mythic Tarot.

The vast majority of first purchase or given tarot decks end up being a copy of the Rider-Waite Tarot. Oracle decks were mostly non-existent at this time. Even I might have purchased the Rider-Waite deck then, even though I did not find it visually interesting. But as it turned out, my bachelor’s degree was in Ancient History, specifically the Athenian period, and the Mythic Tarot happened to be based on Greek Mythology, a personal passion of mine since I was about eight years old.

Not only was this deck based on a body of knowledge I was familiar with at a near-scholarly level, but it also came with a workbook and used four tales to convey the meanings of the different suits – wands/fire told the story of Jason and the Argonauts; swords/air, the story of Orestes; pentacles/earth, the story of Daedalus; and cups/water, the story of Psyche.

The artwork imagery mimicked the Rider-Waite designs, as the vast majority of tarot decks today still do, but with elements more familiar to me than the Renaissance images depicted in Rider-Waite. Also, the workbook was a brilliant addition in the original release (1986), which, sadly, was not included in the re-release of the deck in 2011. These two elements of the deck design made the cards remarkably accessible to me.

So, when clients ask me how to choose a deck, I recommend they select a deck that is “visually accessible” rather than esoteric. Esoteric is what I call a “Fancy Nancy” word. If you are not familiar with Fancy Nancy books, then you should look them up. They are essentially vocabulary books for young children to help introduce them to more complex words.

Esoteric is the kind of word Nancy would love to use because she would consider it “fancy” instead of the more mundane word mysterious or hard or puzzling. The Rider-Waite deck squarely falls in the esoteric category because it does require significant study to penetrate all the diverse imagery captured in the cards, which for most people in the modern era is a sure way to turn them off to the study and use of cards.

Often clients, or people attending one of my lectures, will tell me that they tried to learn to read tarot cards but had to give up because they could not memorize the meanings of the cards and make sense of how to read them when spread out. In most cases, these people purchased or were given a Rider-Waite Tarot. Before they told me which deck they tried to learn with, I would ask them if it was the Rider-Waite and they would exclaim, “yes! How did you know?” and my answer is always, “because it is the most common deck to buy or get as a gift and one of the hardest decks to master”. So, of course, they want to know what deck to buy and now I always tell them, a “visually accessible” one.

Today there are thousands of decks to choose from, both among tarot and oracle cards. What is the difference between tarot and oracle cards? A tarot deck is made up of 78 cards, 22 called Majors, and 56 (in four suits) called Minors. All other card decks, including playing cards, that have any other number of cards (whether 50 or 150), are oracle decks. Pick your online search method – Google, Amazon, or Ebay – and you will get quickly overwhelmed by the number of choices.

There are tarot decks based on animals: the Cat Tarot, the Dog Tarot, the Unicorn Tarot, the Dragon Tarot, and so on. You can get a deck based on different mythologies and beliefs: the Mythic Tarot (Greek), the Egyptian Tarot, the Sacred Circle Tarot (Celtic), the Osho Zen Tarot (Buddhism) and so on. There are beautifully illustrated oracle decks like the Wisdom of the Hidden Realms, the Messenger Oracle, the Enchanted Map Oracle, and so on. There are even some amazing self-published decks like the Connected and Free Alchemist’s Oracle, Kadar Kards, and my own Tarot of the Human Experience.

You do not have to start with the Rider-Waite deck and I really do not recommend it for clients who ask me about getting a deck or the clients who choose to study with me to learn the cards at a greater depth and with professional guidance. I did not buy the Rider-Waite deck in 1989; eventually, I was given one (actually more than one), and they have been redistributed to people who want to do a certain kind of scholarship to crack that deck open.

Nothing will suck the enjoyment out of learning something new faster than being overwhelmed at the beginning, which is what certainly happens most often when someone decides to approach card reading with the Rider-Waite deck or another equally challenging deck, which would include stalwarts like the Thoth Tarot or the Marseilles Tarot, which are wonderful decks, but just not the best beginner’s deck. And while these decks are certainly esoteric, the most esoteric cards for readings are plain playing cards.

Consider any playing card from any suit, say the six of spades. In truth, there is nothing visually about this card that says it means “you face a challenge from a close friend” or “tacos for dinner tonight!”. Really unless you do research and find the generally agreed upon meaning and flat out memorize it, the card gives you nothing visually to go on for meaning.

Now if you happen to pick a card out of the Osho Zen tarot deck, which uses fully modern images along with keywords printed on the cards, you can start working with the deck without even referring to the book. This deck disposes of the court cards as Page, Knight, Queen, and King and replaces them with directions North, South, East, and West. Major cards like the Chariot become Awareness and the Wheel of Fortune, Change. The artwork aligns with the descriptive word. The three of fire, Experiencing, has a woman hugging a small tree and their energy fields are mingling. The eight of rainbows (earth energy), Ordinariness, has a woman walking in the field picking flowers.

All Decks Can Be Powerful

If you are interested in getting a deck of cards for your personal self-development or you think you might want to read cards for others, perhaps one day for pay, then I recommend you start with a visually accessible deck, one where you can see the meaning in the artwork right from the start. And please keep this in mind, a visually accessible deck is not less useful or powerful than esoteric decks; they can just as easily take you deep into work on yourself or move clients profoundly from one state of knowing to another.

I have more than 60 decks in my collection and at least 25 that put to use professionally and 3 that I use personally. Some are more sophisticated than others and only a few fall into the esoteric category, which I sometimes, but not always use with more seasoned clients or fellow colleagues when we exchange readings. But even with them, we can get a powerful experience using a tarot as fun as the Happy Tarot or an oracle deck as “bright and shiny” as the Answer is Simple oracle cards.

When it comes to getting your first deck, it is okay to start from the shallow end and work your way into deeper water. Jumping in the deep end (Rider-Waite) often drowns the interest right at the start. And today, there are so many visually amazing and ready to use decks that it can be worthwhile to start with more modern artwork, graphics, or photography, and even select cards with keywords.

Happy hunting for your first deck!