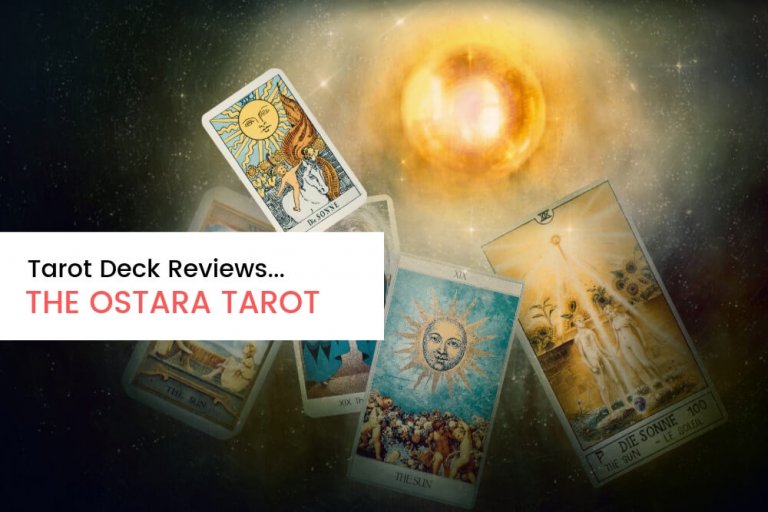 Tarot and Oracle Decks have exploded into the common experience since the 1990s. Today there are literally thousands of decks to choose from, including out-of-print decks and published ones. Reviewing anything involves subjective judgment based on various criteria: quality and size of the cards, visual accessibility of the art, quality of the companion text of the deck, and potential usefulness in professional practice. This month I have chosen to review the Ostara Tarot Deck (ISBN-13: 978-0764352829).

The Ostara Tarot was published in 2017 and I purchased my copy in 2018 while on a vacation in Myrtle Beach, South Carolina.  In an unusual twist, there are actually four artists that worked on the cards for the deck, Molly Applejohn, Eden Cooke, Krista Gibbard, and Julia Iredale.  Using modern imagery and the Rider-Waite foundation, these four artists have created a beautiful deck full of rich symbolism and artistic creativity.

From the book that comes with the deck, “The Ostara Tarot, owing its name to the pagan vernal equinox, marks the midpoint of spring and ushers in a time of light, rebirth, and new growth.  In this deck, you will discover a journey that loosely follows traditional Tarot symbolism, while also exploring themes of wilderness, surrealism, and feminine intuition.”  Each artist selected a suit: Molly Applejohn, the Coins; Julie Iredale, the Wands; Eden Cooke, the Cups; and Krista Gibbard, the Swords.  All four artists worked on various cards of the majors, identified in the companion book.

The card stock is excellent, and rather thick, which makes shuffling challenging until the cards are worn a bit.  I have rather average to small hands (I cannot palm a basketball), so the size of a deck of cards matters when it comes to shuffling them, especially in front of clients.  This deck is larger than a deck of playing cards, and more rectangular than square with a silver edging and very high-end print quality, so the images really pop!  Even with a high level of constant use, these cards will hold up and keep their quality.

The Ostara Tarot is certainly a solid deck for professional readings and an excellent deck for public readings.  It is one of the regular decks I use in my public reading rotation and clients really enjoy the quality of the art.  While the imagery does have some visually challenging cards, like the 10 of swords, which shows a whale stabbed with 10 swords, or the Tower on fire and collapsing, the majority of the cards are powerful, but not in any way frightening.

This deck is something of a mix when it comes to visual accessibility, much like the Mythic Tarot previously reviewed. There are no keywords on the card expressing the meaning of the card, which can be found on the Osho Zen Tarot (the first deck I reviewed) and most oracle decks. Some tarot decks put a keyword at the bottom of the card, but most do not. While certain cards are visually interesting, like the 2 of Wands, which shows a young woman wearing a birdcage on her head and shoulders while one of three birds perches on her finger, it is not visually clear why this imagery suggests the meanings: future planning, progress, new discoveries, and unburdening.  The 7 of Wands, which shows a figure at the top of the card who has had to climb various ladders to get there, makes more visual meaningful sense for its interpretations: challenge, competition, perseverance, and success. 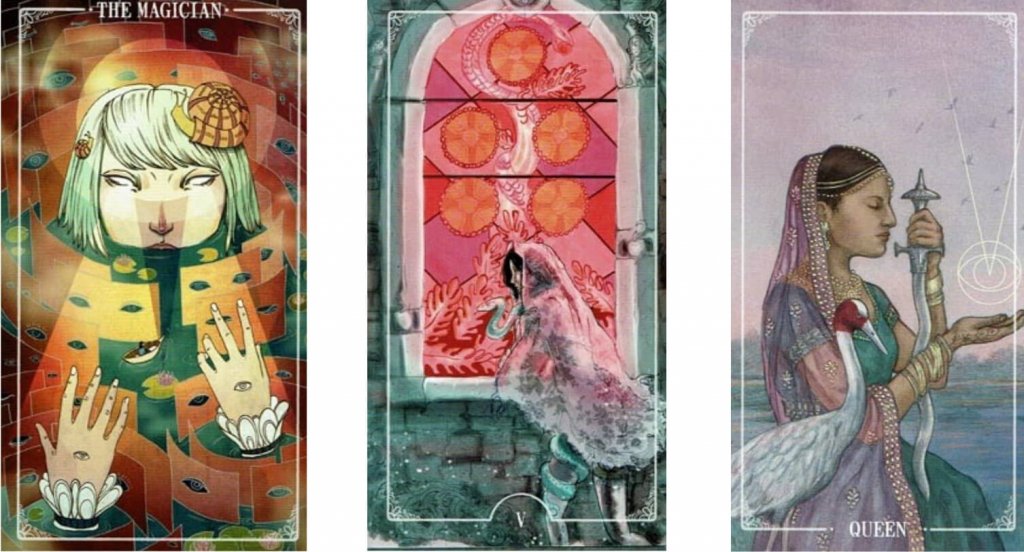 As a professional reader who started reading cards for pay in 1992, I can say that this deck very good for most clients and public settings. While the name of the deck is based on a pagan word for the changing of the seasons, I would not consider it a “pagan” deck like the Wildwood, Sacred Circle, or Waking the Wild Spirit decks.  Too much of the deck uses modern or surrealist imagery.  Professionally, this deck is more visually accessible than many decks, but still not what I would advise as a starter deck.  In many of the major arcana cards, the artwork does a good job communicating the essential meaning of the card, but that level of revelation is not consistent across all cards, and less so in the minor arcana suits.  The Sun card is “a warrior stands watch, poised for action.”  Not an interpretation easily assessed from the image. And the 4 of Coins shows a “pirate” rabbit (eye patch and all) that means: greed, emotional detachment, shallow happiness, and generosity somehow.  You will have to study the book with the cards to know the meanings intended by the creators.

I am comfortable giving this deck a high rating.  It is a valuable deck if you are interested in a clever and creative blend of modern imagery and classical ideas grounded in the Rider-Waite Tarot.  This deck is a very nice addition to the tarot genre and I can certainly recommend it, both as a potentially useful deck to read with for yourself and others, and as a collector deck, well worth having for the outstanding art.  I currently have well over 70 decks, roughly 25 I use in rotation as a professional reader, and 5 are always within my reach when it comes to selecting a deck to read in public.  This deck is actually one of the 5 I use in a public setting.