Home » Blog » Tarot » The Numerology of the Number 7 in Tarot 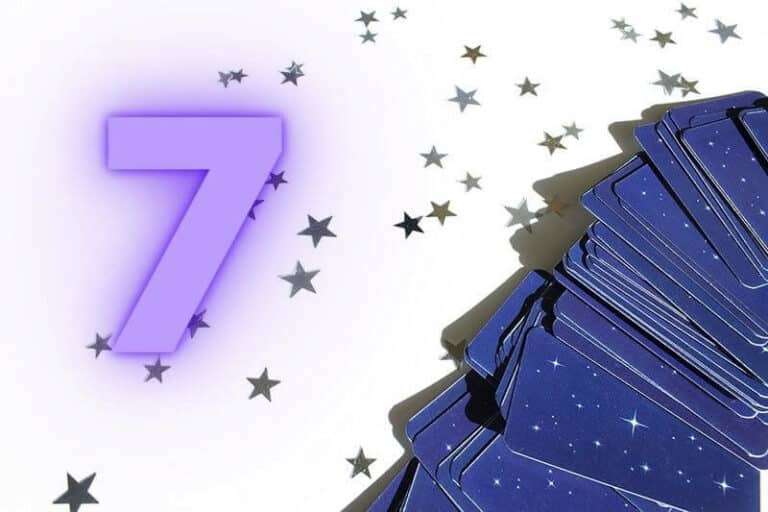 This article will explore the cards of the tarot that represent the number 7.

Six Cards Represent the Number 7 in a Tarot Deck

An individual that has life path number seven is spiritual and mysterious. Therefore, they have the passion and energy to find the truth, understand dreams, and study philosophies. Their personality develops through their efforts to learn about the world by studying large patterns and a human being’s need for purpose.

As spiritual people, they embrace honesty, philosophy, and the mysteries of life. So, they become successful through the guidance they offer others who are lost and in need of spiritual or psychological healing. Since they unlock the mysteries of life to succeed in life, they overcome challenges thrown in their way by experiencing failure, difficulty, and loss to learn how to overcome each experience and then teach others.

Each number 7 tarot card exhibits some aspect of this energy.

Keywords associated with this Tarot Card

Astrologically, the Chariot is associated with the sign of Cancer.

When the Fool’s journey reaches the Chariot tarot card, the Fool has turned into an adult, with a strong identity forged through experience, education, and contact with the outside world. The Chariot teaches the Fool how to use their willpower to effectively change their environment. Once the Fool has defined their values and the kind of person they want to be, they must try to fit into the world both by changing themselves and changing the world around them. Free from any sense of doubt, the Fool confidently moves forward as they start defining their place into the world.

Keywords associated with this Tarot Card

Astrologically, the Tower card is associated with the planet Mars.

The Fool now has to learn the harshest lesson of all. To be freed from bondage and blind subservience to primal urges, sometimes violent change is the only way out. The Tower tarot card pushes the Fool into a dire situation. The walls and structures carefully built so far are breaking down one by one in a painful and almost unbearable epiphany. But just like the Death card, the lesson that the Fool must hold on to is that even in the face of adversity, even when hurt and brought down, there is always a way to stand back up and build something new, something better, from the ruins of their old world.

Reversed: confusion, indecision, being out of touch with the real world, and never-ending daydream

The Seven of Cups represents the motivations for our choices in life. Each cup contains a different energy or symbol. This card appears to make us think about “why” we make our choices.

This is yet another rather whimsical illustration that can be found in the Rider-Waite-Smith (RWS) Tarot deck. A silhouette is standing before seven chalices as if he had to make a choice. The core thematic is a mirror image of the four of cups scene where the protagonist also had to make a choice between several options.

The overall tone of the illustration of this minor arcana card is quite different here. While he turns his back to the reader, his lack of choice probably comes from a hard time deciding between several fantastic looking artifacts (jewels, a snake, a small dragon, and so on); whereas the man in the four of cups was clearly not interested in making a decision himself.

In the Rider-Waite Smith Tarot deck and most of its derivatives, the illustration of the Seven of Pentacles is obviously a projection. The main character appears to be a gardener, wearing commoner clothes, taking a short rest by putting his weight on his rake after, we assume, a job well done.

But instead of fruits or vegetables, it seems that he was planting… pentacles, the symbol of the suit of Pentacles, and they seem to grow out of a small bush or tree on the left side of the tarot card (only six of the seven pentacles are on the tree, the final one is at the gardener’s feet, presumably recently “planted”).

Even though pentacles don’t grow on trees in real life, the imagery is quite striking and offers an inkling regarding the meaning of the Seven of Pentacles. When this minor arcana card appears upright in a tarot reading, it is meant to represent long-term planning, and returns on investments. Like a gardener, planting some seeds, and being willing to work on them for a while and wait even longer, will ultimately yield another crop.

The main character in the Seven of Swords tarot card illustration (in the Rider-Waite deck and most derivative tarot decks) is represented sneaking away rather hurriedly from a camp with five swords in his hand. Two more swords are planted on the ground next to him.

The man is presumably stealing these swords from the nearby camp, looking over his shoulder to check whether he has been seen.

The core meaning of the Seven of Swords is not necessarily negative, though it should probably be considered amoral. In more modern readings the action can represent taking one’s own knowledge and skills elsewhere to be valued and appreciated properly.

Traditionally, the action shown in the card may involve betrayal by colleagues or friends, quite unexpectedly. In the long run, such a revelation, while painful at the moment, may prove beneficial because you see someone for who they truly are.

Upright: courage, integrity, standing for your beliefs, and valor

Reversed: defensiveness, lack of critical distance, and being offended

Another scene with just a single man in the traditional RWS deck, armed with a staff and seemingly fighting and fending off assaults coming from the other six wands and staves displayed on the card. The man in the scene seems rather young, but his face is full of determination and he is clearly unafraid, despite the obviously unbalanced odds.

In this suit of Wands, as can clearly be inferred from the very evocative illustration found in the Rider Waite Smith deck, this card is mainly a token of courage, bravery, and selflessness.

This card is usually drawn in a reading to highlight someone ready and willing to stand up for their own beliefs, and do their best to make the world a better place in the process.

Full Moon
The moon is currently in Gemini