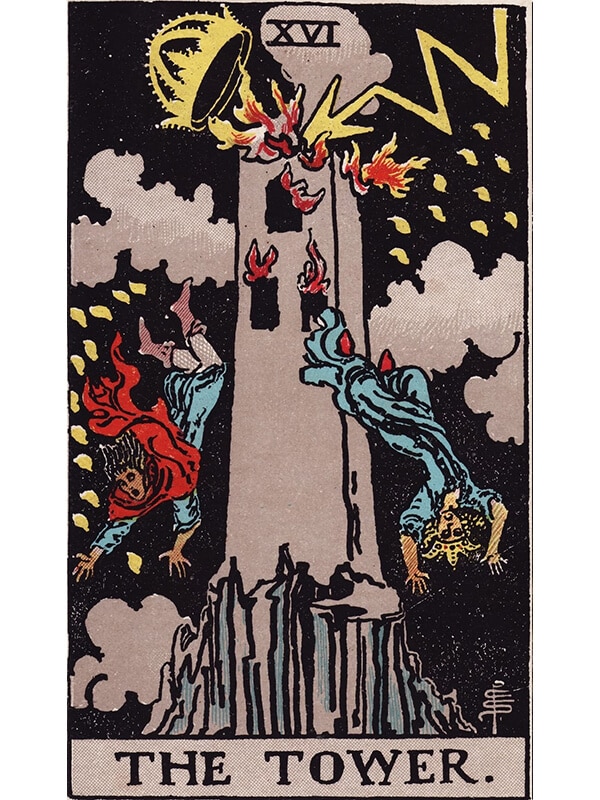 When you hear its name without looking at the picture, the Tower tarot card might seem nice and hint at meanings of structure and stability, but once you open your eyes and see the tower crumbling after being struck by lightning, it is easy to see that there is more depth to the message this arcanum is trying to teach.

Astrologically, the Tower card is associated with the planet Mars.

While the nature and architecture of the structure itself can vary widely from one tarot deck to the next, the common point that binds them all is the presence of a towering edifice being struck down by lightning, so hard that part of the tower starts crumbling down. Since lightning doesn’t usually break down stone walls, it is easy to imagine that this particular lightning strike is not just like any other.

It is hard not to make a connection between the specific imagery of the Tower card and the legend of the Tower of Babel, struck down by divine lightning when excessive human pride led God to strike down the Tower with holy lightning and curse its descendants.

Just like the crumbling Tower in the image, the meaning of the Tower card is usually negative, a sign of destruction and despair, a hint that something important to the Querent or to the particular aspect studied in the reading is about to break down.

It could be anything, and context matters to understand where the danger lies. Usually, the tarot can provide either a means to prevent any tremendous catastrophe, or sheds some light on why this particular experience is meant to be, and what can be drawn or learned from that painful experience.

The number 16 card of the Major Arcana, The Tower, represents significant and unexpected disruption. There can be a breakthrough, like accepting a proposal for marriage, or a breakdown, like rejecting a proposal for marriage. One way or another, you will have to deal with something shocking or you may be the cause of something shocking in your love/romance area of your life.

If you are single, this card will alert you to surprises you might find in your search for a romantic partner as well as the surprises you might have to reveal to a romantic partner. Perhaps you have a financial situation that would surprise a potential date, either by being in extreme debt or extremely wealthy. You have to think about how you would choose to handle the unexpected if you fall in love, only to discover your love interest is hiding something. With this card present, background checks are highly recommended.

If you are in a relationship, this card will indicate the potential for shocks to your relationship dynamic. You may already be in one or about to cause one. The card is not just about something getting blown up, but how you will handle the unexpected changes and sudden shifts, probably based on how you have handled them in the past if you are in a long-term relationship.

Career encompasses school and education if that is your current stage; work that is necessary, but not what you would consider a career path; and your actual career path. Regardless of your current stage of development, the Tower represents a powerful and unexpected shift, which could be positive or negative, could come from the outside or from within you. Ultimately you will not see it coming and you will have to do the best you can to adjust.

If you are a student and this is your card, then you need to consider what is the most unexpected situation that has come up for you, and it may not be academic, but social. The impact, however, will be felt in your academic career. You could wake up one day and realize that you do not even want to be in school and suddenly feel you must “escape” as soon as possible. Try not to panic, and realize the shock is meant to awaken you spiritually in some way.

If you are working, but not doing something you would consider a career, then this card will reflect your awareness that something may not be stable at your job or you have reached a point where you are ready to quit without notice. It is possible that some outside event is forcing you to make a sudden change at your work.

If you are in a career path, then this card can indicate Tower action and lead you to do something completely unexpected or face an unprecedented shift in your industry, either something breaking it down, like a new technology coming online that makes your work instantly obsolete; or something blowing it up, like going public with the company, then being bought out, and becoming instantly rich.

The reversed Tower card meaning is just as ominous. The main difference comes from the nature and source of that danger. Usually, this is the result of the actions of a specific person (or a group of people) rather than due to karma or destiny.

Reversed, this card suggests you may need to take on the role of the Tower, by suddenly and completely disrupting your relationship. You make a clean and abrupt break, pack up your things with no announcement and move out. Conversely, you could profess your undying love to a friend, and shock them with your declaration.

The Fool now has to learn the harshest lesson of all. To be freed from bondage and blind subservience to primal urges, sometimes violent change is the only way out. The tower tarot card pushes the Fool into a dire situation. The walls and structures carefully built so far are breaking down one by one in a painful and almost unbearable epiphany.

But just like the Death card, the lesson that the Fool must hold on to is that even in the face of adversity, even when hurt and brought down, there is always a way to stand back up and build something new, something better, from the ruins of their old world.

This is probably the most negative card to be found among the twenty-two major arcana in a tarot deck. It is usually the sign of something bad about to happen, something about to break down (which could be anything, from a relationship to a prized possession). While there isn’t really a positive way to twist that particular event, what is important is to see what can be done with it. Either to try and prevent it using the wisdom of the cards to guide you onto a path that might prevent the disaster. Or, if there is no way out, you should see what lessons might be learned from that bad experience and use it as knowledge to do better next time.

It is easy to give in to despair and give up when disaster strikes, but knowing how to stand back up and move on is what makes all the difference between common people and those who want to be better, between the sleeping masses and people looking for enlightenment.

Meditating with the Tower

It is usually best to stay away from traditionally negative meaning cards when using the tarot as a trigger for a meditation session. However, meditating on the Tower tarot card can be a very useful way to help cope with the pain of a bad experience or memory, or to draw important lessons from a harsh trial that fate has recently sent your way.

Try to visualize a mental parallel between a bad experience you have endured and the image of the crumbling tower on the tarot card. Then focus on the ruins that are left, and try to see how you can rebuild something on the ashes of what you have lost, something that might even be bigger and better than it used to be.