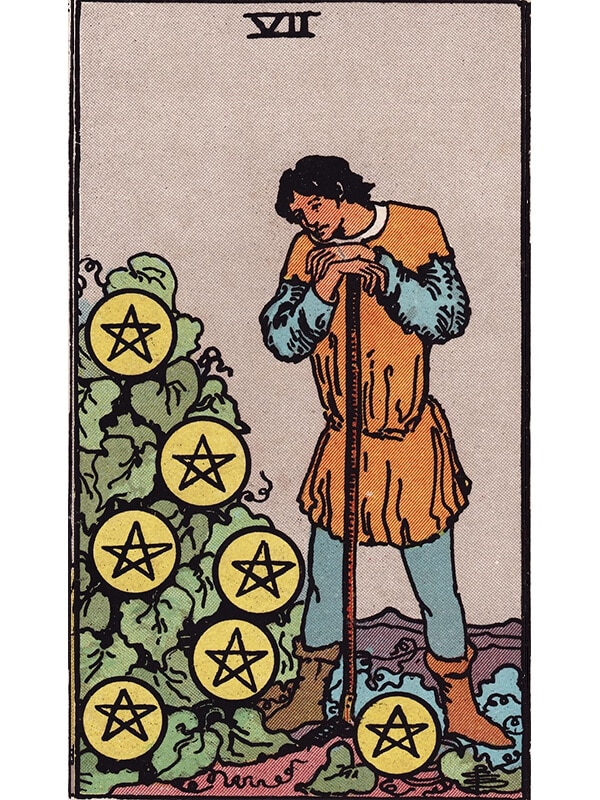 Like a farmer working hard on his crops and waiting for some kind of return on investment, the Seven of Pentacles is a mainly physical card. It advises having some long-term vision and looking ahead instead of repeating the trappings of a routine life that never slips out of its comfort zone.

As such, the Seven of Pentacles makes a strong case for perseverance and sustainable practices. It might not be as rewarding in the short term as a more traditional process with the immediate payoff, but with proper care and concentration, this “plant” might even grow even taller, and will usually outgrow any short-term goal.

In the Rider-Waite Smith Tarot deck and most of its derivatives, the illustration of the Seven of Pentacles is obviously a projection. The main character appears to be a gardener, wearing commoner clothes, taking a short rest by putting his weight on his rake after, we assume, a job well done.

But instead of fruits or vegetables, it seems that he was planting… pentacles, the symbol of the suit of Pentacles, and they seem to grow out of a small bush or tree on the left side of the tarot card (only six of the seven pentacles are on the tree, the final one is at the gardener’s feet, presumably recently “planted”).

Even though pentacles don’t grow on trees in real life, the imagery is quite striking and offers an inkling regarding the meaning of the Seven of Pentacles. When this minor arcana card appears upright in a tarot reading, it is meant to represent long-term planning, and returns on investments. Like a gardener, planting some seeds, and being willing to work on them for a while and wait even longer, will ultimately yield another crop.

While the main context that makes this card relevant is obviously the subject’s finances or bank account (representing long-term investments with favorable rates), it can also apply to more conceptual aspects of the Querent’s life. The Seven of Pentacles might be about any long-term plan of a project that will require time and patience to yield interesting benefits.

While the Seven of Pentacles usually makes the most sense in a reading focusing on money or material goods, it can also sometimes appear in a tarot spread focusing on love or relationships. In that case, a parallel must be drawn between the usual materialistic meaning and the romantic context.

As such, the most common interpretation would be the slow building of a relationship over several weeks or months, taking the time to “to get to know” the other person instead of trying to capitalize on some sort of “love at first sight” energy. A beautiful love story can also work when looking at the long-term goal instead of striving for short-term gratification.

Career encompasses school and education if that is your current stage; work that is necessary, but not what you would consider a career path; and your actual career path. Regardless of your current stage of development, the Seven of Pentacles represents your investing vision for the future.

If you are a student and this is your card, then you will want to map out your academic schedule from the start of your studies until the end. What knowledge do you need to accumulate and build upon to ensure your long-term success.

If you are doing work that is necessary, but not a career, then you want to make sure you have some kind of savings and investing process in place and helping you towards retirement one day. You also want to make sure you are “reinvesting” in yourself (the six pentacles on the tree) and paying attention to new opportunities (the one pentacle on the ground).

A reversed Seven of Pentacles is usually here as a warning against lack of long-term vision or preparation. While the most obvious way to represent it would be the lack of any kind of long-term plan, it might also direct attention onto a potential mistake in a long-term plan, making one’s move way too soon, or maybe even too late, but either way, the time was not right and it could be a source of failure for the said long-term plan.

A reversed Seven of Pentacles can also mean disappointment, especially towards a specific project that has encountered some kind of impassable obstacle. The rest of the tarot reading might provide some advice regarding how to change the situation and find some way around that obstacle, but this usually won’t be an easy task.

When this card appears reversed in a question about school, work, or career, then pay attention to your progress and your goals. Something may be amiss or already out of alignment and you need to tackle the problem before it leads to failure. If you are already in the failure, then this card can help you acknowledge that “what’s done is done” and now you need to move forward in a new direction or with the lesson of the failure to guide you.