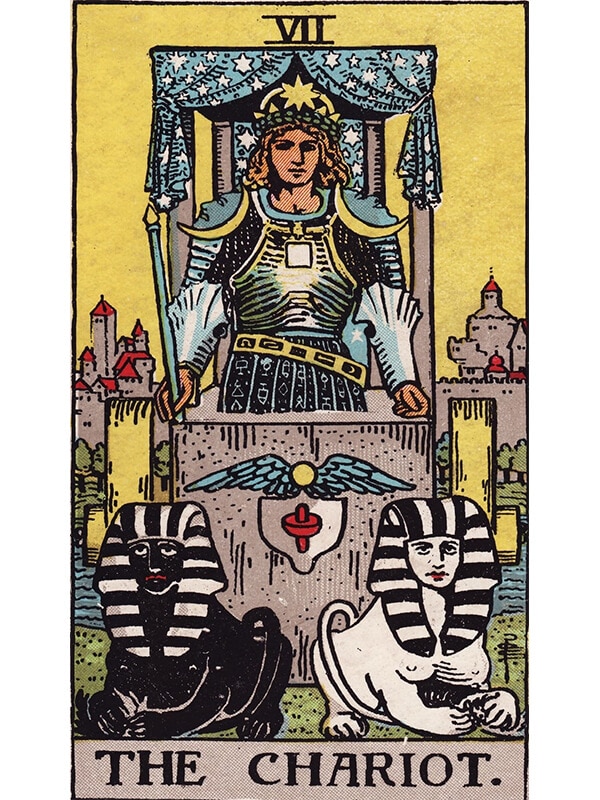 The Chariot tarot card is often a good sign when it pops up in a reading. Like the character depicted on the major arcana, the chariot in tarot means that your life is moving forward and that you are making progress overall in your various projects. Where the fool was striding forward because he was candid and naïve, the chariot tarot card moves forward through sheer force of will and determination, with his eyes on the prize.

Astrologically, the Chariot is associated with the sign of Cancer.

A princely and regal figure is standing proudly on a Chariot drawn by two sphinxes (in the most commonly used Rider-Waite tarot. Other decks may use other animals, horses, or bulls in some decks originating from the Mediterranean Sea) riding forward towards the viewer.

The inclusion of the two sphinxes instead of more traditional beasts of burden can be traced back to the writings of Eliphas Levy, an ancient occultist who researched the tarot deck meanings most thoroughly, and then included by A.E. Waite into his world-famous tarot and book, The Pictorial Key to the Tarot.

This is one of the most positive messages among the major arcana meanings. Just like the figure in the Chariot card, the Querent and his plans are decidedly moving forward. This is a major arcana that resonates with the positive energy of triumph, in turn, absorbed by the Querent, leading to further achievements and victories, leading to the more positive energy of triumph in an everlasting cycle.

The use of the sphinxes as beasts of burden is here to highlight that these victories are not necessarily victories in war or of brute force. The Chariot offers energy for any outcome, including riddles and other challenges of the mind.

One of the downsides of the Chariot card is that it can lead to excessive pride sometimes, propping you up for a fall if you don’t keep your eyes wide open and fairly objective when you think about yourself.

The number 07 card of the Major Arcana, the Chariot, represents drive and willpower and the need to be assertive in some way with regard to love and romance. The Chariot is an action card with a clear direction and pursuit of a specific outcome. It is the “let nothing stand in your way” card.

If you are single, this card will ask you to really make dating your focus, with intensity. Identify what you want in a relationship and then be willing to do the work and put in the passion to achieve the outcome you want, first and foremost, by creating and developing the best version of yourself. Having a positive, can-do attitude is very attractive in the dating market.

If you are in a relationship, this card encourages you to speak up and assert what you want in your relationship. This is an “I” card, not a “we” card. Sometimes we have to be assertive and see how our partner responds. We may discover that they are happy to have us taking the lead or pushing ahead, or we may find that what we want is out of alignment with what the other person wants, which will teach both of you something important.

Career encompasses school and education if that is your current stage; work that is necessary, but not what you would consider a career path; and your actual career path. Regardless of your current stage of development, The Chariot represents the will to power to achieve what you set out to accomplish.

If you are a student and this is your card, then you need to make yourself stand out in class and at your school. Indicate and put in the effort to be the best student in each class and strive for the necessary accolades to earn rewards and recognition through hard work and determination.

If you are working, but not doing something you would consider a career, then this card will indicate that is a time to stand out, put in the overtime, and show that you want to be the best and most successful employee in the company. You want to see your work environment as a place of competition where you are out to win and prove that you are the best employee they have at this time.

If you are in a career path, then this card encourages you to assert the ideas that you think will help the company and your career the most. You want to be fearless and take risks. This card is definitely a high risk, high reward card. But with high risk, there can be a great loss. So, this card is the moment in a poker game when you “go all-in”; you will either win big or go out with a bang!

Usually when a card is extremely positive in its base meaning, seeing that very same card reversed in a reading is probably bad news. The Chariot card is a sign of defeat and broken spirits when it appears reversed. Psychologically, this could be a sign of clinical depression, which is a serious illness that should not be disregarded just because there are no obvious physical symptoms.

Reversed, this card certainly can indicate the harder you try, the worse things will go. In short, you need to back off or tell the other person to back off. Take a breather or a break because forging ahead and trying to force the relationship will surely cause trouble. You may also know a relationship needs to end abruptly or you are on the receiving end of an abrupt break-up.

When this card appears reversed in a question about work or career, then you want to be aware you will get very little return on your investment (ROI). Hard work does not pay off and obstacles abound. You would do well to bide your time or even take some vacation days if you have them. If you are working on a project or deal, it might be a good idea to take a pause, review the project where it is before trying

When the Fool’s journey reaches the chariot tarot card, the Fool has turned into an adult, with a strong identity forged through experience, education, and contact with the outside world. The Chariot teaches the Fool how to use their willpower to effectively affect and change their environment..

Once the Fool has defined their values and the kind of person they want to be, they must try to fit into the world both by changing themselves and changing the world around them. Free from any sense of doubt, the Fool confidently moves forward as they start defining their place into the world.

An extremely positive card (unless this major arcana is reversed), the Chariot lets you catch a glimpse of the road ahead of you, a road full of challenges but that you know you will easily understand. As long as you keep faith in your own abilities and do not let doubts and second-guesses steer you away from the path you are walking on, the meaning of the Chariot card should comfort you in your own choices and let you enjoy a particularly positive time for yourself.

The Chariot card is often a good sign when it pops up in a reading. Like the character depicted on the major arcana, the Chariot in tarot means that your life is moving forward and that you are making progress overall in your various projects. Where the Fool was striding forward because he was candid and naïve, the Chariot card moves forward through sheer force of will and determination, with his eyes on the prize.

Meditating with the Chariot

This is a great major arcana to use as a focus for meditation when you are feeling low, or when you suffer from a serious lack of confidence problems. Try to project yourself onto the card. If you know about a specific challenge you are about to face and afraid to fail, just think about it. You are now the victorious and proud figure standing in the middle of the card, coming back from the field of battle where you achieved your goals. You have overcome all your enemies. You have proven the might of your mind. Now just enjoy your many blessings and live every day to the fullest!

Waxing Gibbous Moon
The moon is currently in Taurus