The Numerology of the Number 1 in Tarot

Home » Blog » Tarot » The Numerology of the Number 1 in Tarot 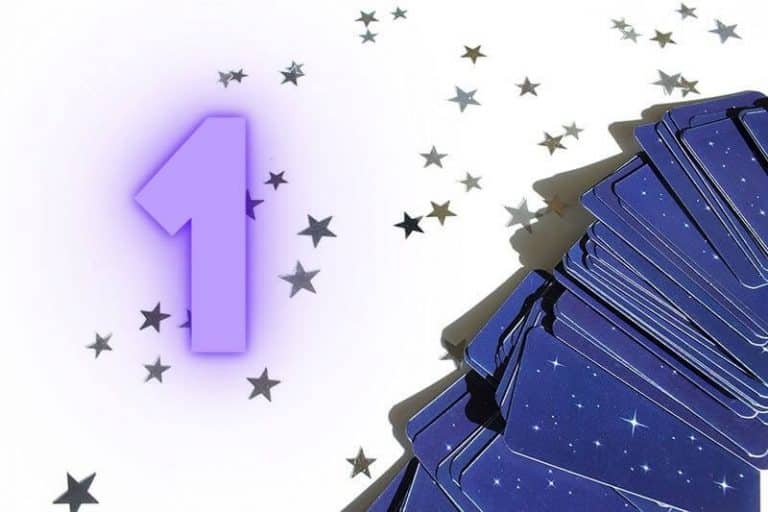 We have the numbers of our birthday, month, and year.  Most countries have a number sequence for citizens (in the United States, it is the 9-digit Social Security Number or SSN).  Most of us have a phone number; if we drive a car, we have a number plate.  Each word and sequence of numbers reduce to a number between 1 and 9, and each of those numbers has spiritual meaning.

This article will explore the cards of the tarot that represent the number 1.

Eleven Cards Represent the Number 1 in a Tarot Deck

The Magician tarot card exudes confidence and willpower. He holds many tools nearby, each representing his mastery over the forces in the minor suits. His knowledge is vast and ready to be shared with anyone worthy. The Fool learns about choice and how to solve problems from the Magician.

The Wheel of Fortune represents situations beyond our control that we cannot avoid and must address. In our life journey, we often face external pressures from other people or circumstances that force us to react. The Wheel of Fortune teaches the Fool how to handle the outside world that forces restrictions or choices upon him or her.

The Sun represents revelation and pure truth. The card tells us that we must face reality, whatever it may look like under the full rays of the Sun. When we bathe in the light of the Sun with an open mind and heart, we gain tremendous energy and insight. The Sun teaches the Fool to be honest, with himself or herself, first and foremost, as well as with others.

The Ace of Cups is probably one of the best cards that can be drawn in any spread or reading focusing on romantic love. Indeed, in that context, it highlights a surge of emotional bliss coming from that feeling of love.

When it appears in a spread, the Ace of Pentacles provides a strong sense of stability and order. While the aces usually represent the beginning of something, the appearance of the driving force behind the minor arcana suit into the Querent’s life, here the Ace of Pentacles should be seen as a state of achievement.

Upright: the start of a new endeavor, manifestation, a new job, and making money

The Ace of Swords can also represent any positive aspect where the mind has to play a crucial part, like communication skills, knowledge, or the objective use of justice, weighing pros and cons in a neutral way to provide a fair sentence (literally or figuratively).

The Ace of Wands represents willpower, creativity, and passion, an echo of the element of fire that rules over that minor arcana suit. Just like this element, the ace of fire can be a wonderful source of energy and motivation in almost any context, but it might burn you if you don’t keep your eyes wide open and control how it spreads.

The happiness found in the Ten of Cups comes from domestic bliss, enough material comfort to bring peace of mind, and a radiating kind of love that is reached when your lover and life partner is equally your friend and companion.

The final numbered card in the suit of Pentacles, the Ten of Pentacles represents the pinnacle of what the element of Earth has to offer, a rock-solid foundation where the family can grow, a source of love and companionship that can support one another, safe from most financial woes by some shared wealth and long-term planning.

Like many of the numbered minor arcana from the suit of swords, the Ten of Swords is an extremely bad card to find in a tarot drawing or spread. Even when dealing with something that has not happened yet, the negative message is so strong here that it will hardly be possible to fully avoid it. Something important is about to come to an end, and something dear to the subject of the reading will eventually probably be lost in that final struggle.

The Ten of Wands is the last numbered card in the suit of wands and closes the series with a pretty bleak image and an even bleaker meaning. Self-inflicted at best, deadlocked, and inescapable at worst, the ten of wands is a reminder that life can be tough and difficult sometimes. However, there is a kind of nobility to be found in the willing sacrifice of one’s time, health, or energy for a greater cause too.